Timmy “Best Dog in the World”

Inspired by Sunskriti’s post a while back, I thought I would offer a different look at Timmy the dog.

Most people cite Timmy, and his mistress George, as their favourite characters from the Famous Five series. Not only that but the phrase “I wish I had a dog like Timmy” is one constantly attached to the one of Enid Blyton’s most famous creations. Timmy is the kind of dog you can only dream about when you’re little. He is the pet who understands everything you do and say, never leaves your side, is clever and extremely protective and loyal.

I can understand why most people want a Timmy in their lives. I wanted a dog when I was younger and, if I had been allowed, I probably would have called him Timmy, much to my mother’s anguish I suspect. 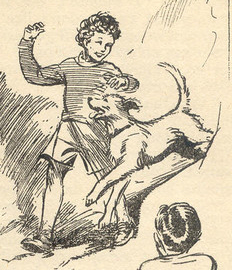 First Timmy meeting, by Eileen Soper in Five on a Treasure Island.

From the moment we meet Timmy in Five on a Treasure Island, we fall in love with him, like Julian, Dick and Anne do. George is a completely different person about Timmy:

‘The little girl smiled, and her face altered at once, and became sunny and pretty.’

and she immediately admits

‘I love him awfully.’

Timmy is an instant hit with the Five, Dick and Anne both say that Timmy is ‘grand’ while Julian replies that “I wish I had a dog like this.” He then convinces George to accept an ice cream from him by saying that the four of them would love to share Timmy in exchange for ice creams and sweets as George doesn’t have money to reciprocate.

Thanks to Timmy, George accepts her cousins into her life because they adore Timmy. It’s a nice start to the series because Timmy sort of becomes the glue for the Five. He shows his worth well in the first book Five on A Treasure Island by finding the secret entrance to the dungeons by falling down the well.

Timmy is a strong indicator of good guys and bad guys in the books. Timmy is often right when the others are wrong. In Five Go Adventuring Again, Timmy’s instant dislike of the tutor Mr Roland indicates to George that there is something not quite right with the man, whereas the other three are quick to dismiss Tim’s dislike as him just being silly. In the end however, we find out how right Timmy, and George, were about Mr Roland. After that the children tend to take more notice of Timmy’s reactions to people. Even remarking in Five Go to Billycock Hill, when Flight Lieutenant Jeff Thomas, who they all liked, is accused of being a traitor;

“So did I,” said Anne, turning her head away.

“So did Timmy,” said George.”And he hardly ever makes a mistake in anyone.”‘

At this point the Five really do think that Timmy has made a mistake in liking and trusting Jeff Thomas, but as we find out in the end, he really didn’t make a mistake. So as you can see, Timmy really doesn’t make mistakes about people.

Timmy attacks Rooky by Eileen Soper in Five Get Into Trouble.

He’s a good protector for the children as well, Aunt Fanny says at the beginning of Five Get Into Trouble;

“I wouldn’t be letting you go off like this with such an easy mind if I didn’t know Timmy would be with you! He’s as good as any grown-up looking after you!”

So even Aunt Fanny knows how good a guardian Timmy is for the children and trusts him to keep them safe and protected. I feel the point of her saying this in Trouble is that it is one of the books where Timmy has to do a lot of protecting. In fact, bar one other incident in Smuggler’s Top where he bites Mr Lenoir’s man servant Block, I think it might be the only other Famous Five where he actually bites someone (Rooky deserved it!) Timmy does almost bite Tiger Dan in Five Go Off in a Caravan but doesn’t.

Sometimes, Timmy, the perfect dog, can cause a bit of trouble and Blyton cleverly uses him to make the plot work. For example in Five Go to Smuggler’s Top Timmy is not supposed to go with the Five to Castaway Hill, but George smuggles him into the taxi and then Sooty hides him in the secret passage ways in the house.

Timmy knows that he has to remain quiet during these times in the catacombs but unfortunately during a lunch he starts barking, causing the children to infuriate Mr Lenoir with their insistence that he can only hear seagulls. Timmy  of course saves the day by guiding Uncle Quentin and Sooty out of catacombs and Mr Lenoir tells the children that if he had been told, he would have made arrangements for Timmy to board in the town. Added with the fact that they thought that Mr Lenoir was the bad guy, the Five feel a little foolish.

Timmy has a couple of other accidents, which are the catalyst for the Famous Five plots. In Five on a Hike Together he gets himself stuck down a rabbit hole and manages to dislocate his leg. This sets off a chain of events in which Julian and George separate from Dick and Anne and the latter two get lost, setting the adventure in motion. Timmy more than makes up for his accident later in the book however when he does some very good guarding against Maggie and Dirty Dick.

Timmy in his collar leaving with George by Eileen Soper in Five on a Secret Trail.

Five On A Secret Trail is another Five where Timmy’s rabbit chasing adventures get him into trouble. This time he catches his ear on some barbed wire and has to have stitches. To stop him scratching them, he has to have a wide cardboard collar made up for him. This collar gets him laughed at and George, fed up with people laughing at her beloved Timmy, goes off to camp on the common in high dudgeon. This temper causes George and Anne, later the boys as well, to fall into another thrilling adventure.

In Five have Plenty of Fun we see Timmy lose his beloved mistress George as she is mistaken for Berta Wright. He goes to look for her when Julian, Dick and Anne are trying to figure out where she has been taken, clearly knowing that there is a problem as George is not there.  Timmy is also clever when they go to fairground with Jo and Gypsy girl and manages to locate George’s dressing gown. The only time he is not clever is when Dick falls over the cat that is following them and  chases after it barking and waking George’s captors!

Timmy has a lot of factors that make him “the best dog in the world” and these are only some of the ones I can remember at the moment. If I think of any more, I shall have to do Timmy Part 2. There is a lot to write about one of Blyton’s most famous canine creations, and I could go on all night, and go through every book with a fine tooth comb and still not be able to do him justice.

The question remains though; Do I want a dog like Timmy?

Most definitely! Who wouldn’t?

Timmy as drawn by Eileen Soper in Five go to Mystery Moor.

This entry was posted in Characters and tagged Animals, Pets, The Famous Five, Timmy. Bookmark the permalink.

5 Responses to Timmy “Best Dog in the World”