The Marsh of Adventure by Poppy, chapter 8 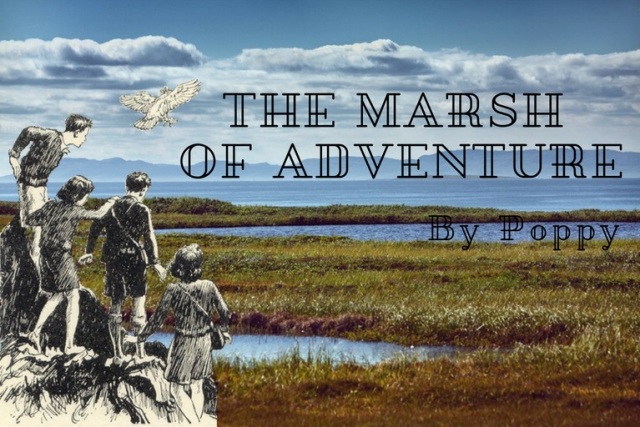 The children heaved everything out of the little cupboard and it lay in a heap in the middle of the dining room. What a lot of things they would need! There were two tents; one for the girls and one for Philip and Jack. There were only two sleeping bags, but they were quite large and if they shared they would be quite alright.

“It shall be quite warm anyway,” Mrs Jordans said. “You will probably not need them some nights.”

There was just enough cutlery, and Mrs Jordans promised to get them a few spare plates and bowls from the kitchen. Lucy-Ann also took a few pans. “We shall need these if we want to cook bacon, or eggs. Or fry bread.”
“There’s a little stove in the kitchen you can take.” Mrs Jordans said. “For if you want to cook.”

The children went around the little inn all day, taking bits and pieces that should be of some use when they were up in the hills, camping. Mrs Jordans helped them, glad to take their minds off Bill, though really, she was quite worried herself. The other guests smiled at the children as they rushed to and fro, all except two. The two men, the ones the children were suspicious of, returned at dinner time and chose a table next to the children’s. They seemed to look quite innocent, but sour.

One of them turned to the children, as Mrs Jordans served up the lunch. “Hallo children,” he began, “My name is Mr Ferton, and my friend’s is Mr Kennedy. You seemed to be packing earlier. Are you going?”

“No, we are going to camp on Lowfell Hill to make room for visitors,” Jack replied politely.

Philip gave him a sharp kick under the table. He didn’t want Jack giving away all their plans to these strange men.

Mr Ferton looked rather annoyed and alarmed. “On Lowfell Hill, did you say?” he snapped looking at the children suspiciously. “Really Mrs Jordans, there’s no need. Mr Kennedy and I have a friend not long from here. The children don’t have to camp on Lowfell Hill,” he said quickly.

“Oh, don’t worry yourself, Mr Ferton. The children have got everything ready. They are quite happy about going out to camp in the hills.”

Mr Ferton grunted. “Wouldn’t go up there, if I were you,” Mr Kennedy said unexpectedly.

“Don’t you go scaring them, now, Mr Kennedy.” Mrs Jordans said, sharply.
“The children are going to camp on Lowfell Hill tomorrow, and you can’t very well stop them with your silly tales.”

Mr Kennedy scowled after Mrs Jordans as she bustled on, spooning stew on to every guests plate.

The children were puzzled. Why did the men not want them to go up to Lowfell Hill? Jack was quite curious to know what the men’s excuse was for them not to go up into the hills. He turned to the scowling men and asked them what went on up there. Mr Ferton smiled wickedly. “That old man that lives up there, he’s mad!”

“Oh, Alf? We like him, he’s awfully nice when you get to know him.” Jack replied, confused. “Is he the man you mean, Mr Ferton?”

“Yes, he certainly is. Threatened he’d call the police if I went any where near ‘is ‘ut again.”

The children ate the rest of their meal in silence, puzzled with Mr Ferton’s threats. But one thing was for sure, they were going to camp up Lowfell Hill!

It had been arranged that the children were to set off for Lowfell Hill, the very next morning. Mr Jordans was going to help carry their belongings, but of course he would not be camping with the children. After dinner, the children sorted out other little bits and pieces and soon everything was ready. The children had a kit bag each with their own personal belongings in, but there were other big things to take like the tents and sleeping bags, and of course, the little stove. By tea time, their little rooms were almost empty! The children would hardly wait until the next day when they would begin their camping trip. They lazed around in the sitting room that evening and talked of nothing else! What a fine time they would have!

“You’ll have to be in bed early, tonight.” Mrs Jordans had told them sternly. “You will have an early morning tomorrow. I will get up and see you off, and of course, Mr Jordans will see you safely to Lowfell Hill.

The children wandered upstairs and got into their bedclothes. The girls fell asleep straight away, but the boys talked for a while. Jack could hardly wait to see the owls at night and looked proudly at his field glasses and camera, that stood on his bedside cabinet. Philip thought of Scamp, Alf’s dog. Kiki was rather restless that night too, Jack had taken down the little perch he had made her to sleep on. He thought he wouldn’t have time to do it the following morning.

Kiki plodded from one end of the bed to another, and onto the bed frame. Jack stroked her crest and she pecked his ear lovingly. ‘Well, I jolly well can’t lie here all night, Kiki, with you trampling all over me,’ he whispered quietly to the parrot. He sat up and put on his dressing gown. His feet slipped into his slippers. Kiki flew up onto his shoulder. He meant to tire Kiki out a bit!

He pulled the curtains open for a minute and leaned out. The pear tree was in sight from here. There were a few pears in sight, not yet ready, but they would taste good, anyway. He reached out and picked one. He bit into it and gave the rest to the delighted Kiki. She sailed to the empty shelf on the wall and pecked at it for a while. Jack leaned of the window sill, feeling a nice cool breeze wash over him.

Suddenly the sound of voices struck him. They were men’s voices, low and grim. It sounded like there were no two of them, no three. Jack looked down into the little garden below. It was all in darkness, and shadows loomed over the beds of vegetables and flowers. There was the big, bare apple tree, they had sat under just the other day, and the gate into the orchard. Only a rabbit scurried about there. Jack leaned further still out the window. He was sure the voices were coming from the garden below him. He hung on to the window still tightly. He was half hanging out of the window now! Yes, there were three men, huddled together. Ah, two of them were the strange men, they had only been speaking to at lunch. Jack couldn’t make out the other one at first. He wore a long coat and smart black trousers. Jack could make out he was wearing glasses, for the moon was shining on the glass of them, that moment. It sounded just like the business man, the children thought to be a scientist. It sounded like the three men were arguing.

‘So, that scientist must be a part of this,’ thought Jack grimly. He took off his dressing gown and slippers and got back into bed. Kiki put up with the little shelf until Jack was asleep and sailed down to rest on his arm. Soon, she too was fast asleep in the crook of Jack’s arm.

The next morning, the sun shone in at the children’s bedrooms, waking them a once. Philip whispered excitedly to Jack; “Wake up, old thing! We need to leave in half an hour to get into the hills for dinner time.”

Jack sat up and grinned at Philip. Suddenly all the happenings of last night came flooding back. Perhaps it had been a dream? He glanced at the shelf Kiki had sat on to eat her pear, or he thought she had. Yes, there were four large pips on the shelf! So it can’t have been a dream.

“I’ve a bit of news to tell!” he said to Philip, as he got dressed.

“No time, old thing!” Philip replied hurriedly. “Tell us on the way.” So Jack told no-one about the secret all through breakfast. He was determined not to tell them on the way either. Not in front of Mr Jordan’s anyway. It was their secret and their secret only.

Everything was bundled up now, waiting patiently in the hall. The children were to carry their kit bags and the other little things, and Mr Jordans would manage the tents and the little stove. So after saying a cheery goodbye to Mrs Jordans, the little party set off. Mr Jordans had attached the tents each onto a piece of rope and swung them round his neck. He carried the stove quite easily. Each of the children had swung their kit bags round their necks, with all their personal belongings in. The two boys each held a sleeping bag and a bag of food, and the girls carried cushions and more bags of food.

“What a lot of things for four children to take on a camping holiday!” he said in amusement. The children liked Mr Jordans, he was kind, and always knew how to take charge of things. He often joked with the children, too, which they thought was very sporting of him.

“So, whereabouts in the hills are you wanting to camp? I would advise you be near a spring so you can get water whenever you wish, and so you can wash,” he said wisely.

“Well, we do know of a spring in the hill, but it’s a bit further down than we wished to camp.” said Jack.

“Well, I know of a nice little spring that runs quite near the top. From there, there is a lovely view around, and you are out of the way of that bad tempered shepherd Alf,” Mr Jordans said, much to the children’s delight.“There is quite a wide bit as well, quite deep. Should be alright to bathe in.”

It seemed like hours until the children finally reached the top of Lowfell Hill, when they sunk down exhausted.

Mr Jordans pointed out the spring. “I must run back, now children. Enjoy your camping holiday. I’ll be sure to come up and tell you if Bill comes back.”

1 Response to The Marsh of Adventure by Poppy, chapter 8