First Term at Malory Towers – How has Blyton’s original text fared in a modern edition? part 3

I’m now onto chapters six and seven of the book, and have reached the bit I was most looking forward to – Darrell versus Gwendoline in the pool. I imagined that would have been heavily updated and I was right. How right? You’ll have to read on and see!

You can see my comments on the first two chapters here, and chapters three to five here. 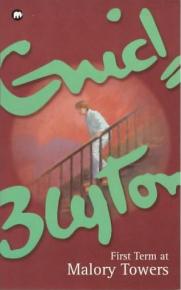 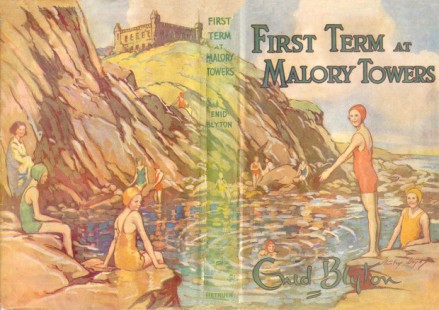 There is only one real alteration in this chapter, when Alicia deliberately mishears Mam’zelle Dupont asking her if she has a cold. She pretends she thought she said gold and replies no, only a ten-shilling note. This has been updated to a five pound note again, as in chapter one as this is the amount given to the girls as pocket money for the term.

Removal of full stops for abbreviations and de-capitalising break remain consistent though.

Firstly, a simple change. How queer becomes how odd.

The rest of the changes revolve around the word slap, which apparently is too heinous a word for children to read and it must be replaced with less on non-violent words.

I don’t really approve of changing slap to scold, especially as these are only thoughts and not actions, but they make sense at least. It’s rather spoiled by the line in between those thoughts, though, which is Miss Winter had always said that a little lady kept her hands to herself. That really makes no sense in the modern edition, in between to references to scolding someone which involves no hands at all.

The sharp slap Gwendoline receives from Darrell for ducking Mary-Lou becomes a sharp shove. I’m not sure a shove can be sharp, really. A simple shove might have worked better, though to me a shove is still violent so I’m not sure why shoving is more acceptable than slapping.

The next edits are some of the biggest I’ve seen, whole sentences rewritten or removed altogether so bear with me as I try to outline it all.

Again, shaking is violent. Why it that allowed if slapping isn’t? The change leads to a lot more changes too.

Whole lines are lost. Originally, immediately after the above quotes, we have Darrell’s hand was strong and hard, and she had slapped with all her might, anywhere she could reach as Gwendoline hastily tried to drag herself out of the water. The slaps sounded like pistol-shots.

This is cut to simply Gwendoline hastily tried to drag herself out of the water. It could have been made into something along the lines of Darrell’s arms being strong and she shook her so hard her teeth rattled but maybe that’s too violent – there seems to be a line in the sand somewhere below slapping.

So, all other references to slapping are lost (I shan’t list the ones which are straight forward exhanges from slap to shake but there are two if you are interested). Katharine tells Darrell she has put herself in the wrong, slapping about like that (which is a bit of an odd phrase anyway!) or in the paperback for behaving like that.

Then, more big cuts. In the changing rooms after, Darrell sees Gwendoline, dolefully examining the brilliant red streaks down her thighs. That was where Darrell had slapped her. This is edited to it was Gwendoline, dolefully trying to console herself after Darrell’s rough treatment. I’m not sure just how you dolefully console yourself. Sometimes I think they try too hard to leave in the original wording especially where it no longer makes sense.

Almost tame in comparison is the final edit where Darrell’s towel-cloak becomes a plain old towel. I don’t know exactly what a towel-cloak is. Presumably a cloak make of towelling material for wrapping around your shoulders when you’ve come out of the pool? 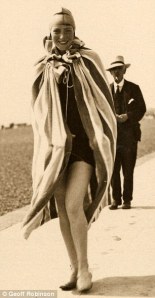 This is from the late 1920s (borrowed from the Daily Mail online), so I’m thinking that’s the sort of thing they mean, a towel that ties around the neck. I’m getting off topic now though!

I had intended to do three chapters again this week but there was so much to write about chapter 7 I’m going to stop there for the moment. Neither chapter was illustrated so there’s nothing to say about those either.

I make that 11 changes then, between the two chapters. Not all that many, but most of them were quite substantial really. That brings us to 42 in total.

4 Responses to First Term at Malory Towers – How has Blyton’s original text fared in a modern edition? part 3