I have some new Noddy books now, ones I bought in Alton the other week. I picked them up from the Post Office this afternoon, just in time to read and review for the blog.

I’ll continue trying to do them in chronological order (not easy when it’s random ones I’ve bought) but the next in the series that I have is #10 You Funny Little Noddy!

I paid £4 for it, which wasn’t bad at all as it’s in a nice condition and has a complete dustjacket. As with all Noddy books there’s no date inside though I know it’s not a first. The dustjacket is a different colour from the first edition and the back flap of the dustjacket differs too. 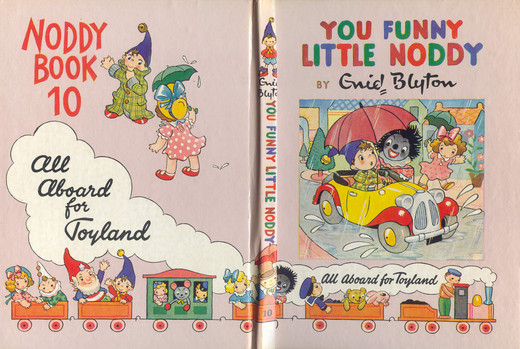 The first edition with lilac boards. Mine is a pale peach colour.

This time Peter Wienk is the illustrator (the others I’ve reviewed were by Harmsen Van der Beek and Mary Brook.)

This story opens with Noddy waking up to find it is pouring with rain. The milkman thinks he will get plenty of business in his car because of the weather (which sounds sensible until you remember Noddy’s car has no roof and his passengers will get just as wet presumably) so the little man hurries to get ready. Big Ears turns up and gives him an old mac which is rather too big and so he sets off looking for customers.

Between his over-sized mac and some irritating customers Noddy is soon in trouble, knocking over a lamppost and a postbox, both incidents unfortunately witnessed by Mr Plod who seems to be a very effective policeman in terms of being everywhere at once. He believes Noddy to be misbehaving though and demands he pays fines for the things he has knocked over.

Mr Plod just keeps on turning up – he’s around when an umbrella wielding passenger makes Noddy crash into a fruit stall and again when Noddy tries to cheer himself up by splashing his car through the puddles and accidentally soaks Mr and Mrs Jumbo. After that it goes down in Mr Plod’s little notebook that Noddy is due one good spanking (bet that becomes a scolding in the reprints!)

Noddy is so upset he runs away, putting his wet and non-jingling hat in his pocket as he goes. 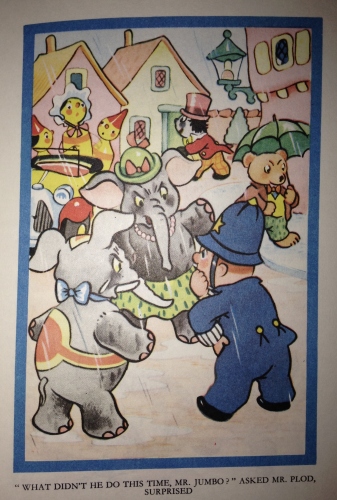 Wouldn’t you run away if these two were angry at you?

His car drives itself to Big Ears who gets worried and goes to see Mr Plod in the morning. The police man is quite worried himself and admits he now knows Noddy wasn’t to blame for all the incidents of the previous day.

Mr Plod puts out notices at all four roads out of the village, which read;

DRESSED IN BLUE HAT WITH BELL, RED SHIRT, BLUE SHORTS AND RED SHOES WITH BLUE LACES. YELLOW SCARF. A REWARD WILL BE GIVEN FOR ANY NEWS.

Funnily though, nobody comes forward with any news. Can you guess why?

Noddy ends up in Clockwork Car Town and earns himself some money winding up the cars there. He gets invited to a big car race later that day and goes along, ending up driving one of the cars when the driver is too shaky and nervous to compete himself. He wins, and is given half the prize money. Being the kind hearted soul he is he decides to use the money to make up for all the trouble he caused that morning. After he has treated himself to three ice creams of course!

He takes the train home, riding on the engine, and goes straight to the police station. Everyone is there, and they’re so very glad to see him back in once piece that there’s quite the celebration. 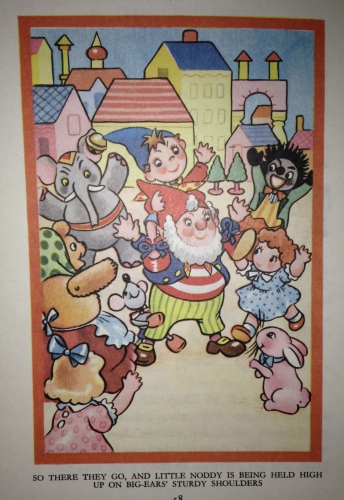 A quintessential Noddy scene complete with a golliwog.

I thought the plot was fairly similar to Noddy and His Car, as Noddy drives about and gets into trouble in that too, and then I realised all the Noddy books I’ve read so far involve Noddy accidentally getting into trouble or getting blamed for something he didn’t do.

Still, it was a nice, short read and an enjoyable instalment in the series. I hope, though, that there is a different type of plot to some of the other books or they might all start to feel too ‘samey’.

This entry was posted in Book reviews and tagged Noddy, You Funny Little Noddy!. Bookmark the permalink.

1 Response to My Fourth Noddy Book: You Funny Little Noddy