The Secret Island – How has Blyton’s original text fared in a modern edition? part 2

Right, so on to chapters three to five of The Secret Island. The previous chapters can be seen here. The original text I’m using is from the sixth impression from October 1949 and the updated text is from an Award paperback from 2009. 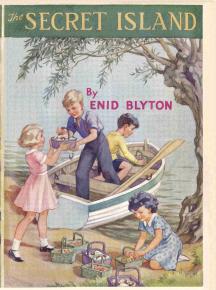 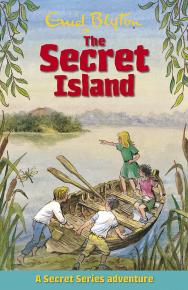 In this chapter, again, references to violence are removed. I’m finding the alterations a little different to what we’ve seen in the other titles I’ve looked at. In the Famous Five it was almost always a case of a word or two being removed or changed for something else, and the same in Malory Towers except for in one or two cases where a line had to be altered more substantially to make sense. This book has already had at least one line completely re-written when it didn’t need to be.

Even Nora took a slapping without tears is the first line to be changed in this chapter. It could easily have followed the pattern set by the other books mentioned, and become something like Even Nora took a scolding without tears. Instead, we get a re-write to Even Nora didn’t burst into tears when she was shouted at. I can’t think why they needed to reorder the sentence like that.

Then we have they’ll be well slapped being changed to they’ll get into big trouble. (That could easily have become well scolded if they were trying to preserve as much original text as possible.

The phrase whip us well isn’t changed as much as it just becomes punish us well.

I only spotted two other small changes, where queerest becomes strangest and lake-water becomes lake water (though sleeping-place keeps its hyphen along with a few other phrases).

Like in the past two chapters the paperback includes one illustration – a full page one while the hardback has three taking up either half or one-third of a page each.

Wynne hasn’t done his own version of Davie’s work this time, he has drawn them in their boat heading to the island while Davie illustrated Nora taking items from the larder, the children carrying their things to the boat and Peggy filling the kettle on the island.

Again Wynne’s seem heavy handed and thick-lined – Peggy seems to have a moustache almost and Nora has war paint on her cheeks it seems. 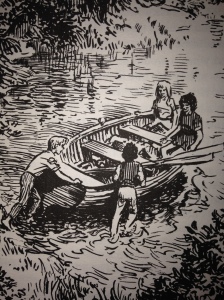 CHAPTER FOUR: THE FIRST NIGHT ON THE ISLAND

For the first time ever I’ve found a chapter with no new changes. All there is here is a few hyphens removed from to-day and to-morrow.

There are three partial page illustrations again in the hardback compared to one in the paperback, and again none of them show the same scene. It’s interesting to see a picture of the willow root larder though, by Wynne, but it doesn’t really match my childhood imagination of it which has stuck. The children seem oddly modern yet old fashioned in his pictures. Their clothes (particularly the boys’ striped trousers) aren’t far off what Davie drew but their hair (particularly Peggy’s) is much more modern. 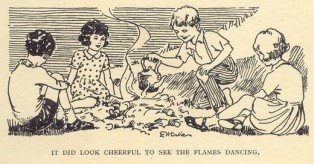 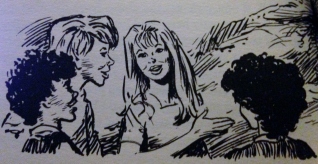 CHAPTER FIVE: THE BUILDING OF THE HOUSE

I was getting a little worried, I admit. Seeing as the last chapter had no changes I was concerned that now the children were away from the slappings there would be nothing to write about. How wrong I was! The crusade in this chapter is all about gender equality. Never mind that up until now the girls have done the cooking, sewing, ironing etc while the boys have been farm-hands – now’s the time for them all to be equals, except then they’re perhaps not quite.

Jack’s the captain of the group so it’s all his speeches that get altered. First he says Now Peggy, wash up and Nora, too. This becomes Now let’s all wash up.

Originally they read (with other text in between of course) Nora and Peggy washed up in the lake… Then they ran off to join the boys in the willow thicket… Jack had been busy. He had chopped down some willow saplings… and had cut off the long branches.

But because in the update the boys stay to help with the dishes it all becomes They washed up in the lake… Then they all ran off to the willow thicket… Jack made himself busy. He chopped down some willow saplings… and cut off the long branches.

I don’t have a problem with the original, I’ll just say that now, as I respect that Jack represents a child of the 1930s who had a different upbringing and different attitudes to what we have now. It’s especially not any less sexist when you consider the next line  – So long as you can cook the rabbits for dinner that’s all you need worry about, is left intact.

That’s one of my bigger problems with the updates – so many things are changed but it’s so pointless as they leave an equal number of things that seem just as outdated/sexist/violent and what have you.

Anyway, before I get too involved in my rant. A few more hyphens are lost from willow-trees and willow-boughs which both become separate words, and a small discrepancy is corrected. The original text has grandad in earlier chapters and then granddad in this one. The paperback sticks with grandad in each instance.

There are four illustrations in the hardback this time, and still just one in the paperback though this time it’s of the same scene, the building of the willow house. 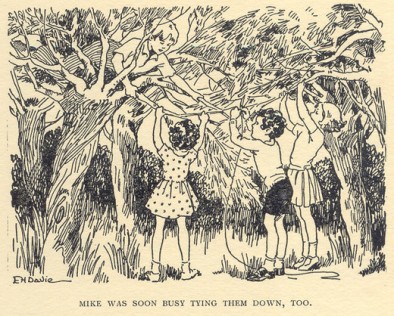 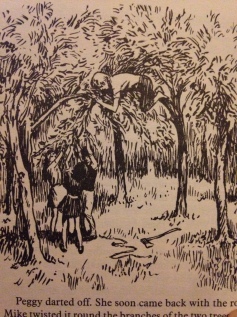 I make that eleven changes to the text (I’m not adding on each time a hyphen is removed.) Add that to the sixteen from chapters one and two and we get twenty seven in total.

1 Response to The Secret Island – How has Blyton’s original text fared in a modern edition? part 2