Adventure on the Way Home

This story comes from Enid Blyton’s Magazine Annual No. 2 first published 1955. Again there have been a few little interchanges on words such as lighted becomes lit, cautiously becomes carefully (happening twice in the text), scared becomes nervous and awful faces is changed to cross faces.  One change that I do not understand is that in the 1955 edition when Scamper hears a noise he is described as having his tail down, but this has been changed to tail up.  When a dog hears something and tenses up, maybe starts to growl, what position is his tail in?

In both editions Colin brings some rope along and Jack climbs up to a window.  This has been chosen as a scene by both illustrators to show in the book and gives a good comparison between 1955 and 2014. 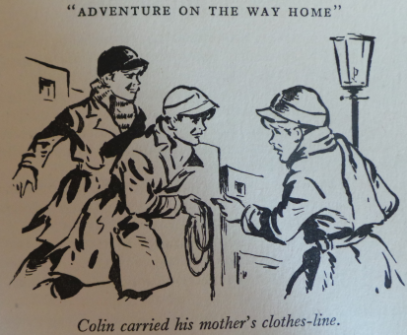 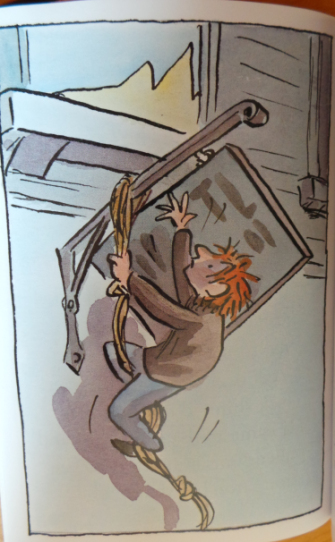 There are also some instances of what may be considered old-fashioned words being left in the book. Thanks awfully for a jolly nice time, Colin remains untouched as does all subsequent uses of the word jolly. Chuck it up stays in the new text as does the description of the policeman walking; policeman had rubber soled shoes and went quietly.  In a lot of Enid Blyton books if you wish to remain unheard you have to wear rubber soled shoes, does this mean that this phrase has been kept in other modern editions and the editors are confident that the young children of today are used to it?

One major change through the book is the reference to violence.  At first the children are alerted to danger when they hear a scream but his has been changed to a noise.  When they hear this they have a little cold shiver of fright which has been changed to cold shiver.  When they eventually see through the window it is described as hand up, he was going to hit someone. Oh there’s another scream. Peter what… This is now hand up. Peter what… Also a most bloodcurdling howl becomes a really loud noise.

When this becomes too much and Peter decides to go to the police, it has been changed on three occasions to go for help but the phrase fetching the police has remained in the new one. Not particularly consistent but then Peter does come back with two policemen so maybe they felt they had to leave one mention of the police in the text  to try to make the story flow.

When we see the “baddies” they’ve got knives has been cut as has the phrase Where’s my knife, Peter saw that he had a knife in his hands, and just you put that knife down. When the girl is explaining what is going on though she states I have to scream like anything! This has not been cut from the new book yet there has been no mention previously of any screams being heard, just a lot of loud noises. 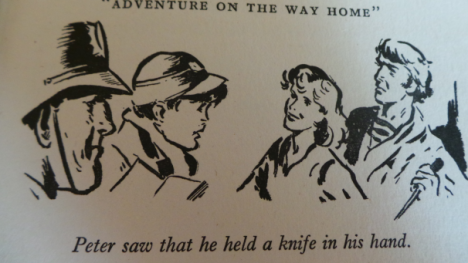 Also in the book the policeman chastises the Seven a little and suggests that if they get into any more adventures their parents would be after them with a cane.  Needless to say this has been cut.  Peter’s father also calls them little idiots when he has heard what they have been getting up to and guess what, yes, it is not a good thing to call your children idiots, even in jest.

There is another minor change in the story where it states he said in the text but it has been changed to Jack said.  It does seem obvious that it is Jack speaking but as the new sentence containing Jack said is at the start of a new chapter, it is probably better that the speaker’s name is mentioned.  A child may have finished the chapter and only be continuing with the story a day later.  In the original story none of the story is split into chapters so this change makes sense in the context of the new editions.

1 Response to Secret Seven books at McDonald’s by Su, part 3