Five Go off to Camp: An exciting dramatised adventure

I’m anticipating this will be very nostalgic for me as this is the story I had on tape as a child. My sister and I had a burgundy tape/radio player which sat near the bottom of the bookcase behind the door but could be pulled around to sit in front of the wardrobe. We used to listen to lots of tapes, taking it in turns to choose between music (Spice Girls, Boyzone and Now! compilations mostly) and stories like this one or Rats! and Follow that Bus! by Pat Hutchins.

The Five Go Off to Camp tape came out in 1995 so I would have been nine and my sister six. She wasn’t such a big fan of Blyton though she did read things some books like Bimbo and Topsy. She did let me listen to this tape though so she can’t have minded all that much. I recall this actually got played rather a lot so perhaps she liked it more than the books. 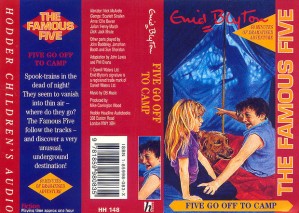 Oh goodness yes, this is the sound of my childhood. All the voices are so familiar, especially Mr Luffy’s. I’m looking forward to Jock’s Scottish accent, my favourite line of his being “Aye, I’m a ninny!”

As a child I don’t think I recognised how bad Timmy’s barking is, it doesn’t sound like a real dog at all.

Oh dear. Jock’s accent is actually quite bad. It’s very inconsistently Scottish. It doesn’t actually say he’s Scottish in the book but it’s an obvious assumption given his name. Mrs Andrews doesn’t sound overly Scottish either though she does have a slight accent and say ‘och’ at times. Mr Andrews does’t sound at all Scottish, until the very end when he’s protesting his innocence, either.

According to my other half the shepherd must be evil as he sounds it. Then, Mr Andrews must be evil also. Now, we know he’s right about one of them but if you say every adult is evil then soon enough you’re going to get it right, surely?

George is very stroppy and almost whiny in this. “I’m going to come too!” she says. “But you will let me come next time, won’t you Julian?” is a line I remember off the top of my head as well. She manages to sound more angry and less whiny when she calls them beasts and so on though. It’s great listening to the whole argument, I can remember lots of the dialogue – a surprising amount considering it must be well over ten years since I’ve heard it.

They do retain lots of quite old fashioned phrases as well. “I dare say the boys won’t deign to!” and “oh do shut your mouth up!” It’s nice that they haven’t been made more modern and the children’s voices haven’t been made any less posh.

There are a good range of voices in the story, Mr Andrews, the shepherd, Old Wooden Leg Sam, the railway station chap all sound different enough (though there are only two men listed for voices after the four children) and add a lot of depth to things, and the children’s voices are mostly well done too. As I’ve mentioned Jock’s accent is a bit hit or miss but the Kirrins are better, despite George’s occasional whining and Anne being a touch stiff.

This isn’t one of my favourite Five stories I have to say. It’s not one of my least favourites but it’s somewhere in the middle really. It certainly has it’s strong points and this audio dramatisation is a good adaptation of it. It’s only an hour long but because the narrator sets the scenes and then all we get is the dialogue I would say the majority of the book is there and very little has been cut.

I’m glad these have been put onto CD actually, as it would have been easy for the recordings to be left to languish rather like the 90s TV series.

This entry was posted in Audio Books and Audio Dramatisations and tagged Five Go Off to Camp, The Famous Five. Bookmark the permalink.

4 Responses to Five Go off to Camp: An exciting dramatised adventure