The Sea of Adventure 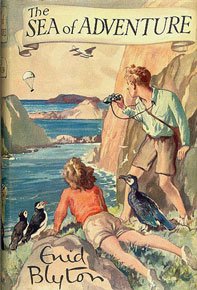 After realising that I had been extremely lax in getting The Sea of Adventure read for this week’s blog,  I started reading it on Friday but I didn’t get very far, so on my breaks at work today and after work, before dinner, I read quickly through my 320 first edition reprint in order to bring you a review this week.

The book starts off with quite a traditional Blyton beginning; all the children have measles and Mrs Mannering, under Doctor’s orders wants to send them somewhere to get their strength back before they go back to school. She tries to engage a governess, but unfortunately the children soon put an end to that idea when she meets the animals, and Kiki in particular.

Anyway after a very suspicious phone call from Bill, a misunderstanding, and Mrs Mannering getting measles, the children go with Bill on a holiday up to Scotland to the Hebrides for a bird watching holiday. This holiday is also a ruse for helping Bill disappear after his current mission went awry. They travel up to Scotland without problem and when they’re on the boat out to sea, Bill is sure he hasn’t been followed and loses his beard.

Soon they’re speeding along, coming to islands filled with birds, which send Jack and Philip into seventh heaven and before long the five of them and Bill have set up a base on an island filled with puffins! Philip, naturally, attracts two Puffins to them, a mating couple it would appear who get called Huffin and Puffin- named by Kiki, if you couldn’t already guess.

This first part takes up most of the book if I’m honest, but the setting is so beautiful that I’m more than happy to read these much of a set up to the main adventure. In fact it helps remind me, that one day I will need to travel to the west coast of Scotland and explore the vast number of islands and their beauty spots before I get too old.

However, just before halfway through the book, we get to really see the full extent of the adventure creeping up on us, when Bill is mysteriously kidnapped in the night and the children are left without him, and their boat. The fear of being stranded doesn’t really appear to overwhelm the children like it would do me, but they continue to make the best of a bad situation and do their best to send signals and such not.

It is rather hard to really review this book as in doing so I would give away a lot more than I meant. All I know is that it is one of my favourite books, the scenery, the storyline, and the heroism of the children really makes me wish I had read it as a child, because I do believe I would have easily been utterly captivated by the thrilling and daringness of the situation the children find themselves in.

However alls well that ends well and soon the children are reunited with Bill and are on their way home after a few false starts. If you haven’t read The Sea of Adventure yet, you really should! It’ll have you wishing you were with the children and gasping at their adventure yet again as Jack, Philip, Dinah and Lucy-Ann come out on top!

Next review: The Mountain of Adventure

1 Response to The Sea of Adventure