A review of Father Christmas and Belinda

I decided today that I wanted to do something more appropriate to the season instead of what I had originally planned for this week.

Over a year ago I reviewed Humpty Dumpty and Belinda one of two Collins Colour Camera Books with a story written by Blyton. I then received the other one, Father Christmas and Belinda for my Christmas last year. I only usually like reading Christmas stories in the lead up to Christmas, and not after, which is why I haven’t read it until now.

I won’t repeat the explanation of how the books came about as I went into all that when I reviewed Humpty Dumpty and Belinda.

This story begins with Jane taking her two favourite dolls, Belinda and Tod, out for a tricycle ride. The dolls fall off the handlebars and get mucky, Tod muckier than Belinda, and so only Belinda accompanies Jane to a party later. Presumably it is a Christmas party (though it isn’t specified) and Jane is given a lovely golliwog as a present.

This worries Belinda who thinks that Jane will forget about her and Tod and play with her new toy instead.

Unfortunately for her Belinda’s vision unfortunately comes true and she and Tod are relegated to the sidelines when Jane returns from the party. Jane even bans them from her bed at night as they are so old and dirty and she says she shan’t like them again until they have clean clothes again.

Her mother is a bit kinder it would seem and takes pity on the dolls but Jane won’t listen to her and leaves them on the window ledge on Christmas Eve while the golliwog comes to bed with her.

Belinda and Tod muse over whether or not Jane deserves to get her stocking filled with toys after her treatment of them, and watch out for Father Christmas arriving. Instead they see a light in Jane’s father’s workshop and go to investigate. They discover Father Christmas himself, searching for something and that something turns out to be them!

I had though Jane was rather cruel to her dolls, considering she is supposed to love them so much but it’s necessary for the advancement of the plot. If they weren’t on the window-sill they wouldn’t have seen the light on, and in fact, if she hadn’t been so cruel Father Christmas wouldn’t have come to find them.

They soon find themselves riding on Father Christmas’ sleigh, though not before he has magicked them to the size of a small child. There are only four reindeer pulling his sleigh curiously enough. Traditionally there have been eight (Dasher, Dancer, Prancer, Vixen, Comet, Cupid, Donner, and Blitzen  which are based on those used in the 1823 poem The Night Before Christmas by Clement C Moore. Rudolph was added in a story from 1939, so still before this was written.

The plan is to visit three or four unhappy children and give them presents before they go to Father Christmas’ home. In fact they visit five children in total.

First is Oolooloo, an Eskimo girl from the Land of Ice and Snow. There’s a bit of geography thrown in as Father Christmas explains that the sun never rises in winter there, and never properly sets in summer. Oolooloo’s mother has been ill and she has had to look after her brothers and sisters and so Father Christmas gives her a doll just like Belinda. It’s not all straightforward though as Father Christmas nearly gets stuck in the igloo and then Tod nearly gets eaten by polar bears.

Next they head off to Norway to see Sigurd who has been ill, and leave some ice skates hanging outside his window. (A Scandinavian tradition?) There is a lych gate into the garden of Sigurd’s house, which of course made me think of Old Thatch.

France is the next destination, to see Pierre whose mother has also been ill. Pierre is from a poor family and so he gets a pair of shoes! There are also flowers for his mother, but I wonder that they couldn’t produce a small toy for him as well.

Then they’re off to a South Sea Island to visit Rosamund who is afraid that Father Christmas won’t bring her a present as she isn’t at home in Australia. Looking rather out of place on a tropical island Father Christmas leaves her a teddy bear in her stocking, which is strung over a campfire by her tent. 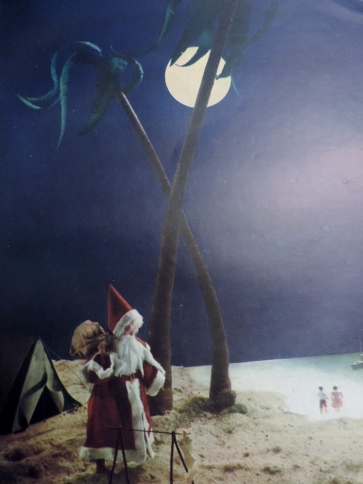 Lastly they make a trip to see Junior (Henning?) in New York. They land on a skyscraper where of course there is no chimney, leaving Father Christmas to take a ride down in the lift to deliver a present to the 50th room on the 50th floor. Junior gets a toy aeroplane as his mother is out at a party and he is worried Father Christmas can’t visit him without a chimney.

THE CASTLE OF FATHER CHRISTMAS

With all their visits complete they’re then off to Father Christmas’ castle to get new clothes for Belinda and Tod. While they’re there they get shown around some of the many rooms. They start with the Room of Dolls and pick up a friend, a sailor doll. They ride some rocking horses in the Room of Rocking Horses and make the teddies in the Room of Teddy Bears growl by pressing their tummies. Then they visit the Golliwog Room and Tod asks them if they ever wash. Of course we don’t, they say. Our faces have to be black. Hmm, perhaps not the best of conversations to feature.

Moving on and they visit the Hall of Trains before Father Christmas shows them his magic mirror. Sort of like the one in Snow White it can be used to show him other people and places, though he chooses to use it to see unhappy children so he can visit them with presents. This time it shows them Jane who is crying as she has realised Belinda and Tod have gone. She throws her new golliwog down and says she doesn’t want him any more, just her old dolls back.

Despite her poor treatment of them before there seem to be no hard feelings and Belinda and Tod are desperate to return to her. They tell Father Christmas not to bother with new clothes for them so they can hurry back. The reindeer aren’t quite ready to take them so there’s time for a look at the toy animals, the Humming Top Room and the Ball Room (not to be confused with a ball room which is for dancing).

At last Father Christmas takes them back to Jane’s house and makes them small again. They find Jane’s mother sitting making new clothes for Belinda and Tod and she talks quite happily to Father Christmas, not seeming surprised in the slightest to see him.

Father Christmas fills Jane’s stocking with toys and pops Belinda and Tod in on the top for her. He then rescues her golliwog and says he will give it to another child who will want him more. I rather feel sorry for the golliwog actually!

Jane is overjoyed to find Belinda and Tod back in the morning and vows she will love them from then on, no matter what.

I can’t say that I enjoyed this as much as I did Humpty Dumpty and Belinda. Although it is quite charming at times, with lovely illustrations and photographs I can’t like Jane and her fickle behaviour. Nor can I work out just what role Father Christmas is supposed to play in the world. Does he only take toys (one each) to sad children on Christmas Eve, and if so why does Jane get a whole stocking full? I’m sure young children – who this is aimed at! – won’t question any of this but I spent so much time wondering about it that it prevented me from really losing myself in the story.

5 Responses to A review of Father Christmas and Belinda