The Island of Adventure – How has Blyton’s original text fared in a modern edition? part 8

Yet again I didn’t get a chance to listen to an audio drama for the blog. So we’re back to looking at the changes to The Island of Adventure. Chapters fifteen and sixteen this time, taking us just beyond the half-way point in the book. Earlier posts are here: parts one, two, three, four, five, six and seven.

My own copy of the book is an 8th impression from 1955 (my mum’s before it was mine) and the modern copy I’m comparing it to is a Macmillan one from 2001 (borrowed from Stef). 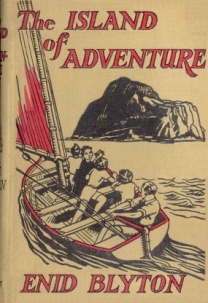 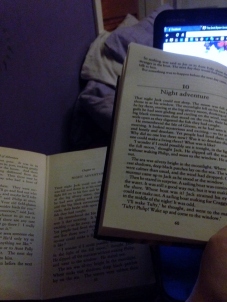 Reading two copies at once 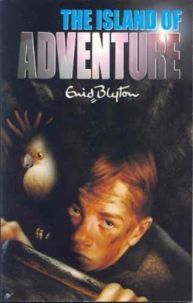 CHAPTER FIFTEEN: A QUEER HAPPENING AND A FINE TRIP

As noted in the first post this chapter title has had queer replaced with peculiar.

There are some very substantial changes made to this chapter – with entire lines being cut so I will start with the minor alterations first.

There are three instances of Jo-Jo being called a black man originally. Two are replaced with just man and one with handyman.

The only queer becomes strange, and Joe says lord knows instead of lordy knows. He also says making a disturbance, rather than a-making a disturbance. So many of his strange phrases and pidgin English are left in so it’s a bit odd when bits are cut. Originally Jo-Jo also says ‘less you tell me, the apostrophe indicating that the un has been missed from unless. In the new copy he just he just says less you tell me. That’s not really an accepted shortening, as far as I know – not like telephone became ‘phone then just phone.

Bill’s wireless set is now his radio set, though  both copies call it a radio the second time – providing the perfect context for children to learn what a wireless was.

I’m not sure whether or not this is supposed to be a correction, rather than an alteration as I can’t decide if the original line is ‘wrong’. Jack originally asks Lucy-Ann Why can’t you be like Dinah, and not worry me when I want to do something? That makes sense enough to me, if you take worry to mean bother. It has been changed to not worry about me. So it’s either an update to make Jack seem kinder, or the editor felt there was a word missing and ‘corrected’ it.

Now on to the first of the large alterations which occurs when the boys are planning their trip in Jo-Jo’s boat. Jack originally says I don’t mind risking myself – but I won’t risk anything with the girls. You can come of course, Philip. This becomes – but I won’t risk everyone. I’d better take you, Philip. I can see they’re trying to do away with the apparent sexism there, but it rather fails. By everyone he still clearly means the girls, as he still says he will take Philip and not them! If he didn’t want to risk everyone he could have taken Dinah or Lucy-Ann and left Philip and one girl as lookouts.

The next seven sentences get cut altogether, which has to be the biggest butchering I’ve come across in any book so far.

“I’m coming too,” said Lucy-Ann at once. She was not going to have Jack going off on a risky adventure without her by his side.

“Well you can’t come, so that’s that,” said Jack decidedly. “Don’t be an ass, Lucy-Ann. You’d spoil everything is you came. We’d have to be too careful if you or Dinah were on board. We wouldn’t dare to take any risks at all.”

The next line is Lucy-Ann tearfully saying that she doesn’t want Jack to take risks which at least makes sense whether or not the above paragraphs are included but it annoys me that so much text has just been snipped out. We lose Lucy-Ann’s bravery and strength when she stands up to Jack and demands to go.

While they are practising in Bill’s boat another piece of dialogue is cut. Jack tells Dinah to take the tiller, and when she doesn’t he orders her about.

“I’ll help old Tufty. Dinah! Did you hear me? Take the tiller and let me help Philip.”

For some reason he’s not allowed to repeat himself when he’s ignored now, and Dinah simply goes straight to rescuing Philip.

Lastly there are several edits to the children’s conversation with Bill when they’re discussing Jo-Jo. Philip had said Oh, he’s just a bit mad, and hates children, but he’s very stupid – and I don’t think he’d dare to do us much harm. This has become Oh, he’s just a bit grumpy, and hates children and their games, but I don’t think he’d really do us much harm.

So he’s no longer mad or stupid, but grumpy instead. I’m not sure why dare has been removed as well. Adding and their games is a bit strange as well. Philip then adds that we’ve had him for years. That’s possibly too servant-y so it becomes he’s been with us for years. That means Bill’s question have you really? had to become just really?

Two things that haven’t been removed are the idea that Jo-Jo will half kill the boys, or the rope-end that he threatens Jack with. The rope-end has been edited out in earlier chapters, however.

There are five instances of queer in this chapter. We get one each of odd, strange and peculiar as replacements, and two queers are left alone (presumably by mistake). Another mistake has crept in whereby trees are now tress. Landing-place is now landing place, also.

Instead of having Jo-Jo’s black face turned suspiciously towards them we have his sharp eyes watching them suspiciously. I seem to recall his face being described as lined earlier, so we could have had the original sentence with that instead of black. I don’t see why they had to rewrite it.

Kiki no longer says god save the king, she says queen instead. I know that post 1953 the original texts read queen and also later reprints of earlier books were updated too, so this alteration probably crept in quite early. It makes me wonder what will happen when Charles or William become king. Will the books revert back?

Another line gets cut in this chapter, though at least it is just the one. Philip tells Jo-Jo that It will be pleasant without you for a change when he is heading off into town. He doesn’t say this in the newer copy, though, or anything else instead. It’s established that the children dislike Jo-Jo/Joe so I don’t see why they can’t be a bit rude to him.

It is recognised now that Blyton got a few facts wrong about copper mining. There was a bit of a discussion on the Enid Blyton Society Forums so I’d been keen to get this far and see what this copy had in it.

The stream is no longer coppery-red but bright bluey-green. Likewise the rocks are green, not reddish. Lastly the rocks also look like sandstone instead of granite. As far as we non-experts can ascertain you can find copper in areas of granite.

As Anita pointed out in the above discussion the rocks were a curious red colour back in chapter 14. From her post we can also see that the alterations to the colourings of copper appeared back as early as 1988.

It’s difficult to know how to tally this lot up. Great chunks of text have been removed, but is that one change, or a change for every sentence? I’ve gone with counting it as one change per sentence removed, as I feel that they are too substantial to not be added to the tally. There are twenty-four in chapter 15 in that case, and another seven in chapter 16. That’s thirty-one altogether, adding up to a total of ninety-two!

This entry was posted in Updating Blyton's Books and tagged The Adventure Series, The Island of Adventure, Updated Text. Bookmark the permalink.

2 Responses to The Island of Adventure – How has Blyton’s original text fared in a modern edition? part 8