Famous Five 90s Style: Five Go Off in a Caravan 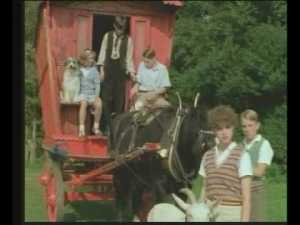 Five go off in a Caravan

In my humble opinion the 90s TV adaptation of Five Go Off in a Caravan is probably one of the worst one given that in our first glimpsed of the Five, we can clearly see that Julian is hobbling along on crutches.

Now if you were to watch this episode in the order in which it had been aired you would know that this broken leg had been worked into the story of Five Have a Wonderful  Time. In real life Marco Williamson did actually break his leg, playing football. I am reliably informed that the producers were not happy with him for this, as both boys had been told not to play football when they were home from filming.  This meant that certain episodes had to be altered to allow for the crutches to be incorporated into the story.

In some respects this gives the others, Dick (Paul Child), George (Jemima Rooper), Anne (Laura Petela) and many supporting members of the cast to flourish but at the same time, causes friction within the Five that goes beyond the three episodes that were changed to accommodate Williamson’s broken leg. The shift in dynamic does allow for the talent of the other actors to come out. Needless to say Jemima Rooper shines through as she brings a more mellow side to George Kirrin.

Given that the broken leg causes so many story issues can it be really surprising that there isn’t a lot about Caravan that still remains faithful to the book? Nobby is a lot older than he is in the book, possibly because they probably needed another older boy to take the lead. However Ben Brazier who plays Nobby is a very successful stand-in lead. He does throw himself into the adventure with the Five and gives a very emotional performance when the dog Barker is supposed to be poisoned.

Anyway I can’t come this far into the post without mentioning our villains, who are two of Blyton’s best and nastiest crooks. Lou the acrobat and Tiger Dan the clown. These two are parodies of themselves; they’re much too clumsy and stupid to be such skilled burglars. Lou is really slow and stupid which makes the whole thing farcical.

Once again the 25 minutes allowed for the episode don’t really let you get into the story, things aren’t explained. Plot points like the caravans being moved and the children going into town to clear the way for Tiger Dan and Lou stay the same, but many others become unrecognisable. Most importantly the chimpanzee, Pongo, in the book is replaced by a goat, Gertie. You can’t get two more different animals! Pongo is the saving grace in the book, coming to help the children and being a good friend to them, and even though the goat is a way for Nobby to join up with the children, it’s not the same.

This had the potential to be a really good episode, but unfortunately one broken leg, scuppered things. There is a nice little scene at the very end, the only thought towards violence perhaps, where Julian’s crutches come in handy as he and Dick use them to trip up the bad guys and then, Dick (you assume because the screen blacks out) wallops them over the head with one of the crutches to incapacitate them. Now that definitely isn’t in the book!

This has to be one of the worst episodes of the bunch and purely because so much had to be rewritten because of Williamson’s leg. It’s a shame because this is one of my favourite books. The notable points of the episode are mostly down to the skill of the actors Ben Brazier and our favourite Jemima Rooper. That broken leg had a lot to answer for, I’ll tell you that for free!

2 Responses to Famous Five 90s Style: Five Go Off in a Caravan