Five Go Off to Camp is one of my favourite adaptations of the books. Overall it doesn’t leave too much out and the acting is very good. There is the fact that Jock is probably older than I would have preferred, looking like he’s older than Julian rather than around Dick’s age, but that is perfectly minor. Again 25 minutes isn’t enough to make this as good as it could be: some of the history is missed out and so is the bit where Anne thinks she’s sitting on a volcano, but we’ll look into those in more detail a little bit later.

We start off quite atmospherically, with Wooden-Legged Sam walking the deserted railyard in the dead of night, with very creepy music to tell us that something is going to happen. Sam spots the light from the train coming out of the disused tunnel and rushes to hide. This has to be one of the best openings for the series as it sets you up to know there is a mystery going on, and when you’re small it is actually quite scary. I remember watching this when it first came out in the nineties and I was genuinely terrified of it. I think it is one of the better openings as I’ve said, and its one of the better books, within that first ten where Blyton was at the top of her game with the Famous Five.

Then we jump to the Five and Mr Luffy, walking the moors, looking for somewhere to set up camp. On the way they come across the farm where they will get their supplies for the holiday and if you’ve read the books, you’ll know how much the Five can eat, so a farmhouse with enough food to feed four starving children and a dog is essential.

I feel as though I need to mention this now, Dick has a new favourite word this adventure “smashing” it becomes a bit tiresome, and eventually gets put a stop to when Jock pinches it from him at the end of the adventure. The others get to tease him for it, so it’s not all bad.

Not only to go with the mysterious lights down by the railway track, there is also a mystery at the farm. The farmer has a brand new car that puzzles the children when Mr Luffy tells Mrs Andrews that the couple who lived on the farm before her could barely scrape a living out of the place. She seems momentarily stumped but then replies that her husband makes sure they all work very hard. You can see the adventure antenae twitching for Julian, Dick and George, though Anne doesn’t seem that bothered. I mean we all know Anne wishes for a quiet life.

The children then head off to set up camp, and Mr Luffy decides to pitch his tent a little way away from the children so they can be a little noisy and not have to worry about bothering him. Of course this means that later on when the adventure starts in earnest the children and sneak out in the night and not disturb him.

After a meeting with Jock’s stepfather, Mr Andrews, Julian and Dick are determined to go and visit the old rail yard that they have discovered and been warned off of by the watchman, Wooden-Legged Sam and then again by Mr Andrews. George is determined to go too, but as Anne doesn’t want to go, Julian forbids George to come along with them, causing one of the bigger arguements between them. Julian hardly covers himself in glory as he and Dick sneak out without George, and then tries to pull rank.

George is fuming that she’s been left out, especially as the boys start to include Jock, and storms off in a huff, with Timmy, determined to have her own adventure without them. In the meantime, Anne, Dick, Julian and Jock decide to explore the tunnel. Unfortunately they’re seen by Wooden Leg- Sam who calls the “gang” led by none other than Mr Andrews!

The gang corner  the children just as they find the spook train and are leaving the tunnel where it hides. Dick, Julian and Jock get caught but Anne, who didn’t walk back through the tunnel with them, is left waiting at the other side and sees the ruffians approaching. She then runs off to find Mr Luffy because she thinks something has gone wrong.

In the meantime, George has found her way into the tunnel through the air vents with Timmy and discovers the train first. Then she witnesses the boys being dragged into the secret hiding place and when the men have gone, she rescues them. The boys are glad to see her and she shows them everything on the train, which mostly seems to contain boxes of tea. (This is a children’s programme after all.)

Anne eventually finds Mr Luffy and then everyone is rescued by the policemen and the children (even Anne) get covered in soot. We end the episode on the traditional way in peals of laughter.

Overall I do think that this episode is very accurately adapted, and there isn’t much I would change. Again it comes down to it not having long enough to go through all the ins and outs of the details a bit more. I do commend them for keeping the short bit with Cecil Dearlove in, the son of Mr Andrews’ friend who is made to come and play with Jock to keep him away from the Kirrins, but only succeeds in pushing Jock more towards them and resenting his step-father more.

Overall, if recommend this episode as one of the strongest in the 90s catalogue. So if you only watch one episode, make it this one! As the acting all around is quite strong, even Marco’s facial expressions aren’t as bad as usual, and the boys teasing of George when she sets her trap to catch them when they go out to watch for spook trains, is easily one of the more memorable. A good strong episode. 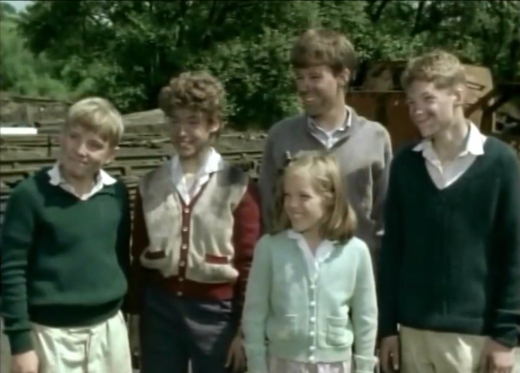 The children plus Jock at the end of their adventure