The Adventurous Four by Laura

~A bit of a reshuffle here at the World of Blyton for you today, we didn’t take into account our busy social schedules and Fiona realised that she wouldn’t have time to write a blog for today so we’re putting Laura’s review of The Adventurous Four up for you instead. Stef ~ 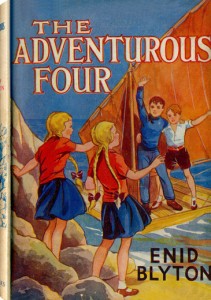 Around this time of year – it’s the middle of winter here in Australia and I woke up to snow a few weeks ago – I start reading books set in summer, preferably near the sea or on an island. This includes Famous Five books like Five Run Away Together and Five Have A Mystery To Solve, any of the Malory Towers books set in a summer term, and The Adventurous Four.

The Adventurous Four was published in 1941 and has a very patriotic theme throughout, especially once things go wrong (I’ll try to avoid too many spoilers) and the girls are reminded to be brave.

It starts in September on the northeast coast of Scotland, where Tom, his younger sisters Jill and Mary, who are twins, and their friend Andy are planning a sailing trip out to Little Island to camp and watch the birds. I like the four children – Tom is fairly obsessed with food, the twins have different personalities with Jill being more impetuous than Mary, and Andy is very much the older, take-charge character of the four.

After packing a huge amount of food, Tom’s camera (very important to the plot) and the gramophone (also essential) onto the boat, they set sail despite Andy’s concerns about the morning’s red sky. Things quickly go wrong with a storm blowing up, sweeping them past Little Island.

They eventually end up on the rocks of another, more desolate island. It’s the first of many islands and they’re all seemingly uninhabited. There is evidence that people lived on their island once – potato plants and ruined houses – which somehow always made the setting seem even lonelier to me.

Once they’ve set up house in the only building still standing – Mary becomes like Anne for a few seconds and wonders if there’s anything to use as a curtain – they decide to make their way to the next island, which has lots of caves. One of these is mysteriously full of tins of food, so the children help themselves and promise each other that they’ll pay the owner. I always wondered why they weren’t more worried about who was leaving food on a seemingly deserted island.

The next day they spot a mysterious seaplane near the second island and hope for a rescue, until Tom recognises “the sign of the crooked cross” on the wings. The enemy are apparently on these islands – they’re never named but I guess the readers of the time knew who Blyton meant – so the children uncover their plans and take some photos of what they’re really up to.

Tom and Andy also manage to steal a boat and the four hope remain hidden on their original island until they can escape, but the seaplane doesn’t help matters. Neither does Tom leaving his camera in the second island’s store cave, especially because he goes to get it and is made a prisoner.

The twins and Andy manage to evade capture using the seaweed trick (which I’ve come across in other Blyton books) and Andy frees Tom with the aid of the gramophone, but now the enemy know that someone is on these islands. The children have to escape the island and tell everyone about the submarines. After one attempt failing when the enemies appear on their island, Andy comes up with a more daring plan.

After a few more surprises, a couple of rather remarkable coincidences and several patriotic speeches, there’s one more surprise for the children when they eventually get home. It’s a good read, nearly as good as being on a sunny island.

This entry was posted in Book reviews and tagged E.H. Davie, The Adventurous Four, Written by Laura. Bookmark the permalink.

8 Responses to The Adventurous Four by Laura