A Review of The Bumper Blyton Improvised Adventure

This is a really hard review to write as I don’t really know where to begin. Going right back to the beginning makes sense I suppose – so, a couple of weeks ago we got a message on the blog from a member of an improvised comedy troupe. The title of the performance alone was enough to have me bouncing in my seat – The Bumper Blyton Improvised Adventure. And the best thing was they were performing at the Fringe Festival in Edinburgh. That’s only around 60 miles from me. Oh, and it was free! That was pretty good, too. 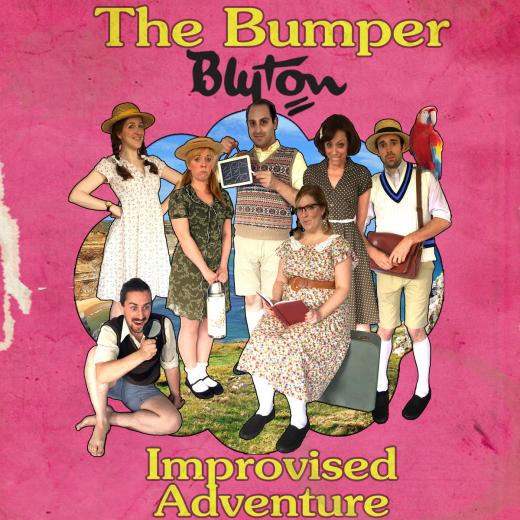 Straight away I set about wheedling my partner into coming along with me and he actually agreed despite liking Blyton about as much as taking the bins out. Terribly unfortunately for him he wasn’t able to get the time off work to come with me, but my mum (who is responsible for introducing me to Blyton) had already volunteered to accompany me so we were all set.

Train tickets were booked, the Fringe site was checked and double-checked for times and locations, Google Maps was consulted to find as many second-hand bookshops in the area as possible and then last Thursday we made the journey.

Stupidly I had managed to book tickets to Haymarket instead of Waverly and naturally there was a row of barriers instead of friendly station guards so we had to get off at Haymarket about a mile from where we wanted to be. Google Maps were again consulted (so much more convenient than trying to unfold and refold a paper map however good Julian was at it) and intrepidly we set off, heading for the Westport area behind the castle.

To cut a long boring tale short we browsed some bookshops (and were very restrained and well behaved about not buying anything), had lunch, wandered around the Royal Mile then headed over to our venue for the four o’clock start time.

There were several shows ongoing at The Counting House but there was a man outside with a barrel and leaflets directing people to the right rooms. We were told that we should join the queue on the stairs for the Blyton show. We didn’t need to panic as there were seats reserved for us but it was heartening to see a long and growing queue forming for the show. One gentleman took it upon himself in a particularly Julian-like way to check everyone joining the queue was indeed intending to see the Blyton Improv and weren’t looking for the comedian performing in the attic or such like. There were a variety of people from the very young to rather older, plainly-dressed and very fashionably dressed there.

The doors opened right on four o’clock and we headed on into the ballroom (pausing to help ourselves to the boiled sweets on offer) and found our seats. As with most improvs the cast needed the audience’s help to come up with various parts of the show. Pens and paper were passed around for titles, locations and drawings of “things”, and names were suggested via finding out our Blyton Names. You too can find out your Blyton name – all you need is the name of a grandparent (you can choose one that matches your gender or not it’s up to you!) and your first school. That makes mine Gladys Macalpine, a suitably Blytonian name I feel!

Ideas were picked at random and we ended up with The Farmhouse Five and the Adventure of the Champagne Case taking place in Porton Down which was illustrated by a map involving two pyramids by the sea.

Our two heroines began the story (typically Blytonian 9 year old twins called Jean and Edith) packing to go and stay with Aunt Fanny in Porton Down. Aunt Fanny didn’t manage to pick them up from the station but Quagmire turned up instead, and putting their luggage in his cart, drove off and left them by mistake. Porton Down being a modern and efficient place the cart was car-drawn and so the poor twins had no chance to catch up and had to walk all the way to Aunt Fanny’s wine shop.

The wine shop is in trouble though (mostly as I suspect Aunt Fanny drank half the stock) but the twins declare they’ll help paint and decorate and make it a success.

Scenes were changed by the dinging of a bell – rung by the other cast members who were either trying to save their fellow actors from a ridiculous situation or were simply eager for their turn.

Next we were introduced to a Lord whose name I just can’t remember – a recluse living in his castle. The third actress partnering him played the role of Susan, his maid, and to her horror and our amusement he suddenly brought up the song she sang all the time – the wine song. That left her with no choice but to come up with a wine song on the spot. Wine wine, it makes me feel fine! Our forgotten named Lord has refused to go out for 12 years after returning from Panama. His life his empty despite his twelve o’clock sherry and his two o’clock gin and his four o’clock port. That was because (cue flashback) he had met a beautiful woman in Panama and drunk the most wonderful champagne with her. He was unable to find a case of that special champagne ever since.

Finally persuaded to leave the castle the Lord takes the name Morton Dinkum (or Tinkum if you were my mother listening to the same performance) and heads to the local wine shop. Somehow he and our twins end up at the pyramids (which are completely normal and not out of the ordinary at all for the south of England). They house the tomb of Colinkhamun, obviously an important English-Egyptian character. The mummy is awoken when Morton Dinkum grabs the bottle of champagne it is clutching, and the walls begin to close in on them. In a bizarre twist the mummy is Daphne Spumante – the beautiful Texan lady from Panama.

Ding! The scene changed and somehow they had escaped the deadly pyramids, taking the champagne back to Aunt Fanny’s wine shop for a suitably happy ending.

Those are merely the bare bones of the fifty minute performance. I can’t possibly decide what my favourite part was.

Nominations would have to go to:

The cast clearly have a great rapport and really enjoy their performances. It was great to see them egging each other on and saying things that forced the others to have to come up with songs and poses and ridiculous answers. The miming was great, which it had to be as there were little to no props. Two chairs and a few hats were all they had to work with so everything else was to be imagined with waves of the arms and positions of the hands.(Saying that, my mum leaned towards me at one point and whispered what are they doing? I had to answer PACKING! as it seemed pretty obvious to me that they were folding clothes and putting them into a case.)

It was all done with a fondness for Blyton at the forefront. It gently poked fun at the upper class environments of her books without ever becoming unkind. The whole audience from the small children in the front row to the older adults at the back seemed to have a wonderful time if the peals of laughter were anything to go by. 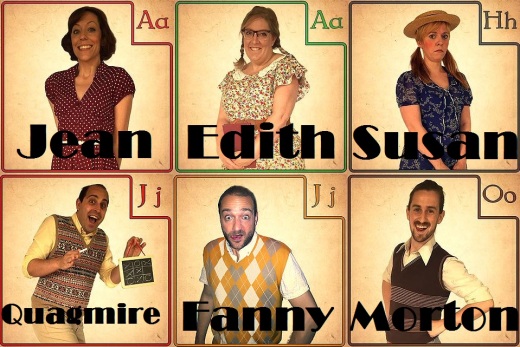 Alison Thea-Skot as Jean/Daphne Spumante, Amy Cooke-Hodgson as Edith, Heather Urquhart as Susan, Jonah Fazel as Quagmire, Justin Brett as Aunt Fanny, the hieroglyphics, the mummy of Daphne Spumante and Oliver Izod as Morton Dinkum and the Trip Advisor man.

I wish I’d been able to go back and see a second performance to see what they came up with using a different set of prompts but it wasn’t to be. I can only hope they’ll perform it again somewhere near me.

One final point – did you know that Enid Blyton is still alive in fact? She lives in a hut on Arthur’s Seat and is known as the crazy lady. Improvised Fact.

3 Responses to A Review of The Bumper Blyton Improvised Adventure