So Fiona did her favourite six books for you last week and I promised I would do the same this week, so here goes. It is quite hard doing six! That sixth favourite was quite a hard choice to make.

The first book on the list is: Five on a Hike Together. 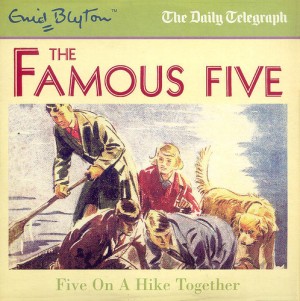 Hike has been one of my favourite Famous Fives since I came back to the books at about age eleven. I mostly think this was because I developed a bit of a crush on Marco Williamson who played Julian in the 90s TV series and the copy of Hike that I had, had him on the front. The story however remains one of my favourites, even after the crush faded, because its like a proper mystery, with the escaped convict, the treasure hunt and the villains, Dirty Dick and Maggie. A proper get your teeth into it, Famous Five adventure.

The second book on my list is: In the Fifth at Malory Towers

In the Fifth at Malory Towers has always been a fun story for me. I had it on cassette when I was little and used to listen to it over and over, and I would love the imagery of the pantomime coming together and the girls finally being old enough to see very grown up and sophisticated to little me. I loved the fact that Mary-Lou comes out of her shell and becomes the lead in the panto and that Alicia is finally humbled. Its such a colourful story that its my comfort reading. I love going back to In the Fifth, it feels like home. 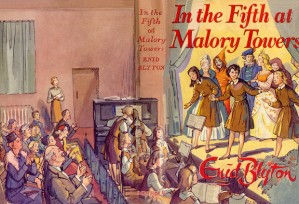 In the Fifth at Malory Towers 1957 reprint by Lilian Buchanan

My third book is: The Circus of Adventure

Now as you progress into the Adventure series people don’t seem to like them  very much, but Circus to me seems to have a real draw to it. Possibly because we get to really understand Jack Trent a bit more, and admire his absolute derring-do! What with Kiki on his shoulder he makes an amazing asset to the circus in which he travels and we have to follow Jack on his travels before everyone is reunited. The series could have ended there as River seems to pale in comparison to the others, and Circus could have been a very strong finish for the series. 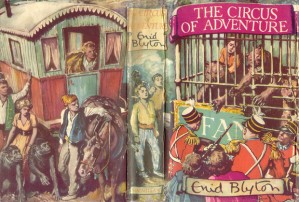 The Circus of Adventure Dustjacket

This is a book I love for the imagery. I love the idea of staying in a lighthouse, and the dramatic pictures of the wind and the rain against the windows of the light house and the dramatic ending. This is a five book that has it all, tunnels, treasure, escapes, rescues, thefts, in fact the only thing I think it doesn’t have is a kidnapping! With such a thrilling adventure with fun around every turn and plus the wonderful world of light houses at your fingertips, who can blame me for loving this story?

The fifth choice is: The Castle of Adventure

I enjoy The Castle of Adventure. I always imagine the whole story set in the Scottish borders, or up by Shropshire in the border with Wales, where ruined castles are the norm. In fact the old castle in the book is reminiscent in my head of Clun Castle in Shropshire (Can you tell I read Malcolm Saville as well?) The thrillingness of the story envelopes you, even though it all starts off a bit slowly, and at times stalls. Jack’s work with the eagles is wonderful to imagine and I’m jealous that he has the patience to sit in that hide all day and watch for the eagles. Again its one of Blyton’s best for scenery and imagination. The landscape in my head is of an unrivaled beauty and that, I’m sure, is what she was hoping for when she wrote her stories; that children could take her words and make the magic happen in their own heads. I’m sure we can all say, that is exactly what has happened.

My sixth and final choice is: Third Year at Malory Towers

Now this one I like because one my favourite characters is introduced, Wilhelmina Robinson, otherwise known as Bill. Bill is one of my favourite characters because she never becomes one of the silly girls. She’s a nice strong independent woman who knows her own mind and will think nothing of breaking the rules if she thinks something is unjust. The devotion between Bill and her horse, Thunder, is lovely to see as well. I’m one of these people who can appreciate the beauty of the horse from the right distance away, but I’m not any good up close and personal with them. I admire people who are though and who have that special bond with animals to make them fall under their spell. I also like this story because it has a nice dramatic ending which isn’t really seen in the last three novels. The late night dash through the rain to find the vet, is very much a vision of my dreams, especially as a child, such language and imagery created the perfect setting for a young, moldable mind.

So there you are, my six books! Do you agree with any of them? What would your six be and why? Drop us a comment or a blog and let us know!