We looked at Part One of Five Go Down to the Sea last week, and now I’m going to bring you part 2.

Last week we left off with the Five staring at the flashing light on the cliff at Tremannon. They then found themselves back at the farm and coming across a surprising thing! The Barnies’ Guv’nor hiding out on the barns! They knew that something fishy was going on and decided to explore that old tower where they saw the lights flashing from.

Before that can happen, there’s the Barnies’ show to watch and help out with. By all accounts it’s a hilarious show and the dinner afterwards is first rate. Now is the time for tom-foolery however as the boys discover that the precious head of Clopper the show’s big draw has been left unattended in the barn. They agree to take the Guv’nor over some supper and have a go with the pantomime horse. No one can work out why Clopper is so well guarded but the boys don’t worry about that as the find all the parts and climb into the suit.

Unfortatunatey for Dick and Julian the zip gets stuck so they have to manouver their way towards the kitchen to get some help. Mr Penruthlan comes out, thinking one of his horses is loose and manages to catch them and unzip them, much to the boys disgruntlement. They deposit the costume back in the barn with the Guv’nor and run back to dinner.

The next day the Five go to explore the tower and find nothing much but splashes of oil, presumably spilled from the lantern as it’s carried up the stairs. The funny thing is that Anne thinks she hears someone inside the old tower, and wants everyone to be careful, but as everyone knows, Timmy would bark if there was someone inside, and he doesn’t even growl.

Laughing at Anne for being scared, rather unkindly as it turns out, everyone makes a search of the tower for where the most oil has been spilt, hoping to find out where the secret passage is. Timmy eventually finds it in an old fire place and the Five find the passage and start to make their way down it. There isn’t a lot of jostling between the boys in this episode, it must have been before Williamson’s broken leg because Julian and Dick’s roles are still as they are in the books. Julian, unsurprisingly then, leads the Five through the tunnel, and tells George that she’s not to go back for Timmy as they think he’s run off to look for rabbits.

Alas, Timmy has gotten himself trapped by one of the smugglers and the Five, in an hope to rescue him get stuck as well. Desperate to escape but out of ideas how, all they can do is sit tight until the smuggler, whom they assume is Mr Penruthlan, lets them go when all the work is finished.

What they do not count on is Anne’s funny noise and feeling from the tower earlier. This turns out to be Yan! None other than the funny little boy who had latched on to them from the beginning. “No wonder Timmy didn’t bark!” they all exclaim when they work it out. Sometimes I wonder that they work mysteries out at all! With Yan having set them free, they follow the passage to the cove where they see someone signalling to the boat off shore and then creep back through the passage that takes them back to the farm.

One of my favourite scenes in the book, which becomes over acted and cringe worthy on screen is the one where Julian suggests to Mrs Penruthlan that her husband is a smuggler and gets a box around the ears by the lady of the house. In the adaptation there is no actual boxing of the ears but a short sharp scene where Mrs Penruthland gets very upset– and no wonder because then walks in her husband and puts them all to rights. He’s been searching for the smugglers, and not one himself.

Now there is still a mystery to solve, how are the drugs being transported and Dick comes up with the clever suggestion that its the Barnies! How can these happy, smiling people be in league with smugglers? Well, lets say the Guv’nor isn’t squeaky clean.

Now I won’t say much more because I’ll give away the surprise ending. Lets just say that the Five get their man and Yan, gets some well deserved sweets.

Overall, again not a bad adaptation; the format of the books is clearly more translatable onto screen through two twenty-five minute programs. They get a lot of detail in, but of course as lover of the books, even longer would have made a better episode. The cast are at their best here, older than they were in the first series, more settled in their characters and all this is pre-leg breaking, and the move away from the natural order of eldest first.

Five Go Down to the Sea has almost always been a favourite book of mine, with the scenes it depicts and the rugged Cornish coast, what could be any better? So I’m happy with these two episodes, they are quite true to the story, and definitely work well as  two parter.

What do you think? 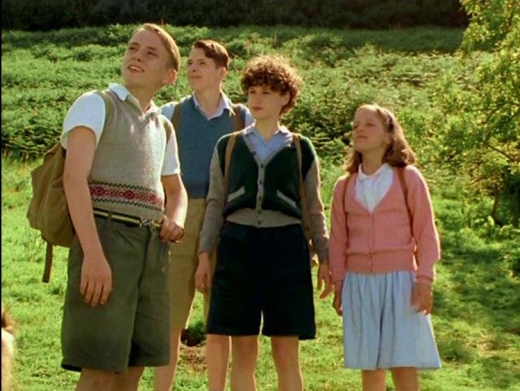