The Twins at St Clare’s – How has Blyton’s original text fared in a modern edition? part 4

I’ve compared three chapters this week, from the Egmont paperback from 2005 (on loan from Stef) and the Methuen 6th impression from 1945. Earlier posts are in parts one, two and three. 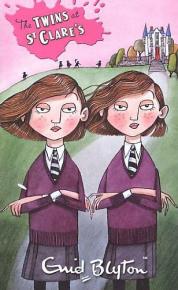 Egmont front cover of The Twins at St Clare’s.

CHAPTER NINE: A LACROSSE MATCH – AND A PUZZLE

For a large part of this chapter I thought the editors had either given up or fallen asleep – the text matched word for word except for a few missing hyphens which could have been pre-programmed with a nice ‘replace all’ command.

In the last few pages however, there are actually a few small changes. As with previous chapters pounds become shillings. The school maids are now staff (before they had been called messengers).

This is another very quiet chapter on the updates front. Two shillings become yours (as in your money), and a shilling becomes a pound. Lastly a printing error is corrected. Originally Miss Theobald had said p oo Kathleen [copied exactly, there is a space between the P and the OO]. She now says poor Kathleen, which I am sure is what she meant to say in the first place!

A couple of money references are not updated, strangely enough as they have been reasonably consistent and sensible so far. Kathleen receives only a penny a week from her old aunt, a rather stingy amount even for the early 1940s. Bizarrely in 2005 she is still getting only a penny a week! No wonder she [spoiler alert!] steals money from the other girls. After that Pat jokes about taking a hundred pounds from a bank account and gifting it to Kathleen. This remains at a hundred pounds, despite that being a far smaller amount now that it would have been then. For example an average house cost £750 and a new car could be bought for around £80. A thousand pounds would have made more sense and kept the shock factor.

A little more is altered in this chapter. The school’s sick-room (usually called the san or sanatorium at Malory Towers) is now the sickbay. Twice in the Methuen edition flu is placed in inverted commas (or apostrophes, I suppose, though they are the same punctuation which surrounds the speech), which looks a little strange. I have seen it as ‘flu as it is short for influenza, but I suppose that back in the 40s (or indeed, the ‘4os)they felt the need to indicate letters missing from the end as well.

The cat that is involved in the trick on Miss Kennedy has its name changed from Blackie to Sooty. Presumably they felt there was something racist about naming a cat after its colour. Likewise, later, Kathleen mentions the black cat, which is now just the cat.

Lastly some italics are removed. The twins say that Miss Kennedy was a silly, but the emphasis is removed. It’s left in the next sentence on the girls were wretches.

That’s only eight new changes over those three chapters, possibly a record for the least found so far. It makes a total of fifty three for the whole book.

This entry was posted in Updating Blyton's Books and tagged St Clare's, The Twins at St Clare's, Updated Text. Bookmark the permalink.

3 Responses to The Twins at St Clare’s – How has Blyton’s original text fared in a modern edition? part 4