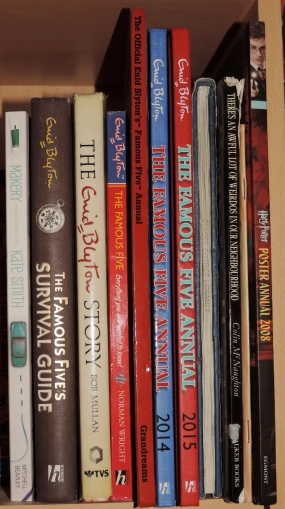 I can’t be the only one who collects many editions of the same books in their collection. I have spoken to a couple of people who indeed find it hard to pass up different editions of their favourite books and this is just as true with Blytons. In fact even more so, and I want to have a look at why this might be.

Now as Fiona will confirm I have many versions of the same books, mostly Famous Fives (And Malcolm Saville’s Lone Pine adventures) and she doesn’t really get why. The only time she had double copies were because of the comparisons she’s been doing for the blog or to replace her copy that has worn out through no fault of its own.

I on the other hand, tends to scoop up any copy of the the books even if I have a copy, perfectly reasonable and usable at home. I don’t really know why I do pick up the copies but I am up for examining options. So lets get on with this.

There we are then, five reasons why I have so many editions of the Famous Five! Sorry it wasn’t the promised blog about cake, but I forgot to make it. I hope you didn’t mind this improvised blog, please let me know what you think and why you have more than one edition of a Blyton book!

This entry was posted in Personal Experiences and tagged My Childhood Books, The Famous Five. Bookmark the permalink.

7 Responses to So Many Editions