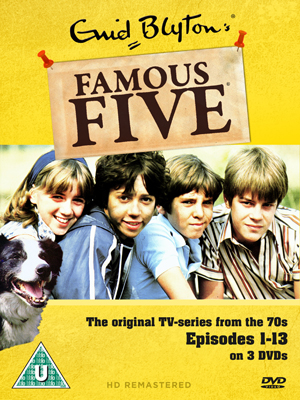 Last week I brought you part one of Five Go off to Camp, and this week it’s time for part two.

I suppose the question we’re asking this week is: can the second part of the adventure be as true to the book as the first? Shall we find out?

The start is strong, with a recap of the previous episode and then we start with the boys heading back to camp with Jock after they have been to spot the spook train for the first time. The nighttime filter at this point isn’t too bad, and you can see all three boys clearly as if the scenes were being shot at night, or at least early evening. I suspect by this point the idea is that it’s early the next morning and in the summer things might be getting lighter.

The row between the boys and George kicked off in the last episode, and comes to a head in this episode when Julian, Dick and Jock decide to give the string George has tied across the entrance to their tent a quick tug to wake her up. Poor George is furious unsurprisingly when she realises the boys have been and gone without her. Unlike the 90s episode we are not privy to the row that happens  between them, which is one of my favourite parts. Anyway George goes off in a huff and spectacularly manages to find herself in the tunnel with the spook train!

This second episode feels a bit rushed, as if the producers suddenly realised all they had to fit in, Jock for example is barely given any screen time, or lines, and just follows Julian and Dick around like a young kid brother – in fact the height difference does rather suggest that he was younger than the other two.

Most the the bits and pieces in the tunnel are hard to make out, I don’t know where they filmed that, whether it was actually in tunnels or a set, but the pitch black really doesn’t help the filming. However we do have some good acting from the cast, really working to make themselves look and appear afraid when the men come pouncing out of the tunnel. There isn’t a lot of actual interest in the train, as in the book they get on board to see what the gang are smuggling. That doesn’t happen here, almost immediately after the boys are captured, George frees them and the hunt to get out of the tunnel is on. As I’ve said before its almost as if the producers realised how much they had left to put in and just rushed through the ‘exciting’ stuff.

Overall its a neat little episode, some of the content however could have been used to better effect in the first episode, had some of the faffing around been taken out, but close to the book still, but none of the real excitement and tension you get from the book when the train is discovered and the boys are walking the railway tracks. Some of Enid Blyton’s best scenes (in my humble opinion) are in this book and they don’t seem to have made their way into this adaptation. Maybe it didn’t translate onto the screen, maybe it just wasn’t possible to recreate some of these bits and pieces, which is a shame.

Overall it’s a solid episode but not as good as the first part, which took it’s time, used the best scenes but may have just dallied a little bit when more important pieces of the story could have been used. Anyway, as I say, a solid episode, just a shame it felt so rushed.

1 Response to The Famous Five 70s Style: Five Go Off to Camp, part 2