And so I have reached the final book in the series. As with many of Blyton’s series the last book seems to be thought of as the weakest, yet I’m sure there will be some people who will hold this as their favourite. 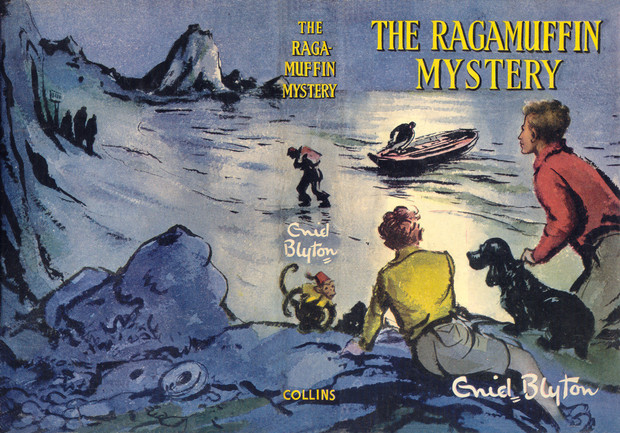 Roger, Diana and their mother along with Miss Pepper are going caravanning for three weeks. Mr Lynton was supposed to be joining them but had to go off to America instead (amazing how often parents and relatives have to rush off to the United States when it’s convenient to the plot) and his place has been taken by Miss Pepper. Surprisingly the children are actually disappointed by their father’s absence as apparently he’s ‘so much fun on holiday’. I can only imagine that for holidays Mr Lynton is replaced with a much more pleasant person, as he has only ever seemed grumpy, cross, impatient and, as Diana would put it – mouldy.

Anyway, man or no man, the holiday is on. Mrs Lynton and Miss Pepper are to share the driving. There is only enough room in the caravan for three, so poor Roger will have to sleep in the back of the car. They only manage a brief period of idyllic hols, eating, bathing, and so on before it’s rather spoiled. Mrs Lynton’s sister has been taken ill, and Mrs Lynton has to rush off to her. That leaves Miss Pepper, Diana and Roger with a caravan but no car.

Here the ‘girl power’ of Miss Pepper fails us entirely. We are used to her being no-nonsense and quite capable but now she quite falls apart. While she does make some contingency plans, the only reach as far as hiring a car and taking the caravan back to her own home for the remainder of the three weeks. They can’t go back to the Lynton home as it is shut up and – shock horror – cook’s away so they would have to fend for themselves. Probably one of the most upper-middle class bits of any Blyton story when a nanny can’t fathom taking care of herself and two children without hired help.

Then, Mr Martin (Barney’s father) steps in and Miss Pepper practically swoons at her knight in shining armour. He has a car. He will boldly and bravely drive them to a peaceful sea-side location for their holiday and then collect them at the end of it. He even makes telephone calls to check on Mrs Lynton and her sister, and gets everything organised.

As you may have noticed, someone, or rather two someones are missing. Barney and Miranda turn up with Mr Martin of course, but where are Snubby and Loony? For once they are not with the Lyntons for the hols. Don’t worry, though, Mr Martin even has Snubby and Loony’s whereabouts in hand.

He takes the three stranded carvanners into Wales and to a little place called Penrhyndendraith (which I cannot even try to pronounce) where there is an old, half-ruined inn (think Craggy Tops except less wind-swept) an ice-cream shop and lots of golden sand.

Here’s the next strangeness. Miss Pepper has now regained enough of her peppery-ness to argue with the owner of the inn. She demands to have the room she wants. To be fair, Mrs Jones’ arguments are not the most convincing (why she didn’t just say that room was reserved… well, we know why. It would have ruined the mystery.)

So by now we know there is something up with Miss Pepper and Diana’s room. Mr Jones tells them there are noises to be heard. (Twang dongs, perhaps?)

Barney and Roger are camping in the caravan outside, and soon Snubby arrives by train. Snubby had been staying with the aunt who was taken ill – and needed to be out of the way. Like his first arrival in The Rockingdown Mystery he gets a different train and arrives early. This time he arrives looking even more like  a dirty ragamuffin as he has travelled the rest of the way by hay cart.

And here, at last, the true mystery begins. His clothes are yet to be sent on and the ones he is wearing need washed so he goes to the shop and buys second hand fisher-boy clothing. Thus clothed like another boy in the area, who also happens to have a small black dog, he is ready to be involved in a case of mistaken identity.

Dai, the fisher-boy in question has been asked by his uncle – the terribly un-pc Morgan the Cripple – to pass on a coded letter to someone else.  This someone else is a bearded man who finds Snubby trying to decipher a perfectly innocent coded message from a school chum. Naturally he assumes Snubby is Dai and snatches the letter away.

Snubby is only baffled until he spots Dai and they work out what has happened. It’s all a little too easily worked out, and Snubby getting the letter from Dai is similarly overly easy.

By now two famous and important men are staying at the inn – one of them being the coded-letter recipient. Snubby manages to hide from him for a day or two but is finally spotted. The two men seem shady, and are proved to be so when the famous ornithologist is easily tricked by a few questions about made-up birds.

The two men also hold very loud conversations with Morgan about the missing letter which explains what will happen on Friday night. It’s all far too easy for the children to overhear this and go exploring on Friday night. In a scene almost straight out of Spiggy Holes they go into a cave and up tunnels, then get trapped by the tide. Going the other way, they find a trap door and end up back in the inn.

I think as my review/synopsis shows, there’s a great deal of inconsequential fluff at the start, then the actual mystery is quit short and lacking in depth. There are no real twists or turns. There was scope for the decoding of the letter perhaps or at least some sort of obstacle thrown in their way.

Barney has lost some of what made him different, too. He is now as bland as Roger unfortunately, a little too sensible and ready to squash Snubby’s enthusiasms. He also telephones his father very quickly to ask for help investigating the two men at the inn.

There are also little things clearly re-used from previous Barney books without anyone noticing. The little shop that sells everything is just like the one from Rockingdown, and not too dissimilar from the one at Ring ‘O Bells also, yet they are all amazed. Diana even makes her witches and fairytale comments, without any real merit.

Something I haven’t even mentioned is Dafydd – the little boy at the inn. He and his goose add little to the story other than to pad it out with scenes of Miranda and Loony chasing the goose. He does let Loony out of the caravan, making Snubby identifiable to the men, but Loony could have escaped due to a faulty lock. He also shows them where the tunnel is from the cave – but that’s something they were more than capable of doing themselves given the opportunity.

So yes, unfortunately this is rather a weak end to the series. It’s not a particulary satisfying mystery, it lacks a lot of the humour of earlier titles (Loony doesn’t steal a single mat, brush or towel at the inn) and it is padded out a great deal with the early caravanning to-ing and fro-ing and then the silliness with Dafydd and his goose.

3 Responses to The Ragamuffin Mystery