This week we’re following on from Five Fall into Adventure part one with part two. The question I posed last week was could it really be possible to fill episode two with all the bits and pieces that were left out of the first one? Well let’s take a look and see shall we?

As I mentioned last week, Julie Davis’ portrayal of Jo is sublime. She has the cheeky little ragamuffin done and dusted. The sharp wit and cunning comes across and even though she may be smaller in stature than the boys she gives as good as she gets. She gambols about like the Jo in the book and generally clambers and climbs everywhere. Even though the boys treat her badly at points, and Dick’s attitude is something we will look at later on, she still comes back to help them, and to rescue George. She could just disappear and leave them stranded in this house on the cliff but she doesn’t – and unlike in the book where we know that she’s fond of Dick, and why, that’s not so clear in the adaptation. Still, a good strong Jo is what we have and continues from part one to part two.

The episode in fact manages to cram an awful lot into it in the twenty-five minutes, the fact that bar one or two scenes at the end, the entire episode takes place in Red Tower’s house. It is a very bog standard house from what you can see, lots of it not in very good condition, but the children can just thunder up and down it without being seen. Jo uses the scaffolding to get onto the roof and then into the room where George is being held. The modern updates are a little odd to have  but they seem to worked it into the episode seamlessly. The motorised dinghy at the end of the episode where the children are all pinning down Markhoff is one of the only other references, apart from the clothes that are being worn, of the updated  time period.

Another good thing about this episode is that the rescue of George from the tower room is pretty much exactly how it appears in the book. Jo climbs up the outside of the tower, slips into the room next to George’s and lets her out. She also lets Markhoff catch her so George can make an escape. I think this more than anything else leads to George insisting that they have to go back for Jo when she hasn’t followed them down to the beach. This is one of the key scenes in the book, even leading to a mutual respect between George and Jo; this is clearer in the book because there was more animosity to begin with, whereas in the TV episodes the spats with Dick overshadow the whole group getting to know Jo and changes the way she interacts with them all.

Now like the first episode, this one is full of laughs, possibly some that you won’t remember as children, if that was your first time watching it. However they certainly stand out now when re-watching them as an adult.

As I mentioned last time Dick’s sarcasm is a big part of the first episode especially with the interactions to Jo are a huge comedic pull. At least from an adult point of view, the sarcasm is very apparent and isn’t going over my head like it did when I watched them at a younger age. (I did not, as you may be able to guess, watch them when they were first broadcast.) In the book, after the first meeting there is a touching scene where Dick wonders if he had given her a bruise, although this is reciprocated somewhat in the first episode, the warmth and trust between the characters is very much lost in the two episodes. Its some of the most touching and real interactions between two characters that I felt Blyton ever wrote. I wish that it had been translatable onto the screen.Back to Dick’s sarcasm however, when Jo mentions that climbing a wall is noting to her, as her father was an acrobat in the circus Dick lays on the sarcasm nice and heavily; 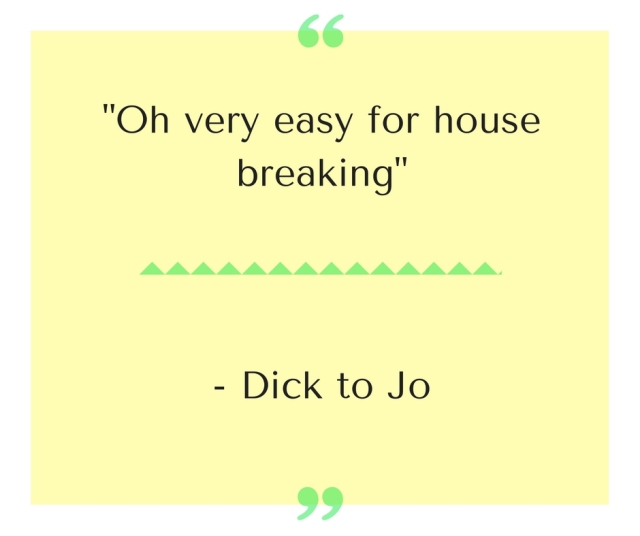 This happens before Jo insists on climbing up the front of the building to rescue George because she is the only one who can do it. The boys appear to disbelieve that she can do it, until she starts climbing. Then they begin to believe that she really is as good as she says.

Julian gets fed up of the exchanges between Dick and Jo, as Jo rescues them from the room where they have been tied up. Dick ends up blaming Jo for getting them into this mess and Jo says she’s getting fed up of saving them. For once you can really see Julian’s nerves fraying when he quite firmly says to them: 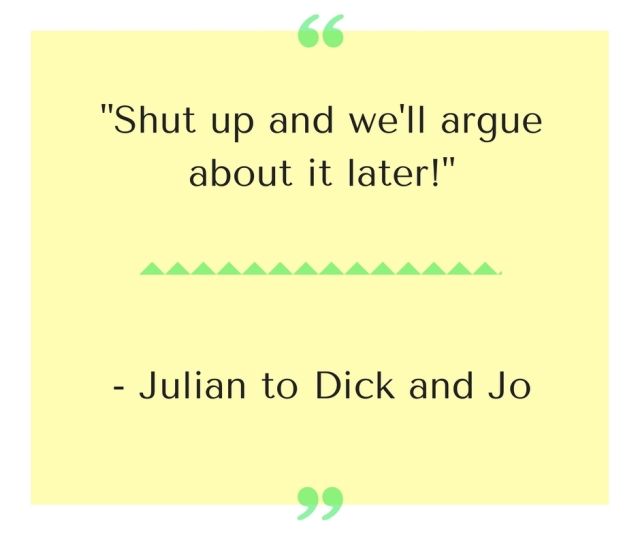 The interactions are overshadowed by the sniping between Jo and Dick, so we don’t get to see George and Jo, and Jo and Anne’s relationship and because they never shot Five Have Plenty of Fun, and Jo’s character never appeared in Five Have a Wonderful Time, so we don’t get the progression of their friendship.

They have to be mentioned: the baddies. The bad guys, Markhoff and Red Towers are scary but not convincing that they could actually control the children and over power them when needs be. There is a scene at the end where Markhoff is trying to stop the children leaving the island but as soon as Timmy is revived, he is over powered by the dog and the four children. In fact even the girls could take him out. In my mind the Markhoff in the book is huge and overbearing and not really able to be taken down by a group of children.

One last thing: the boat. They don’t actually disguise the boat when they go off to find George in Red Towers house, so actually the fact that they’re surprised the boat is still where they left it, is genuine, because I’m pretty sure Markhoff would have actually found it and smashed it up.

So, did writer Gail Renard manage to deliver a show stopping second half of Five Fall into Adventure? She did! Were all the important parts shown? They were! Was it true to the book? As much as it could have been within the constraints of time and TV. Is Gail Renard possibly the most talented script writer? Without a doubt; Yes!

If you haven’t watched these two episodes, you need to. The hilarity of Dick’s sarcasm is something that really stands out in these episodes. You really do need to watch them for the brilliance of Gary Russell’s sarcastic one liners. You will not be disappointed.