If you like Blyton: Arsenic for Tea by Robin Stevens

Having started to read this book I am wondering if perhaps I should have made the title If you like Agatha Christie… as this book has moved away from the Malory Towers backdrop to a secluded country mansion where a party-guest is poisoned.

But to return to the beginning, for a moment. This is the second Wells & Wong Detective Agency story. The first book was Murder Most Unladylike, set at Deepdean school where Daisy Wells and Hazel Wong investigated the murder of one of their teachers. Everyone else believed the teacher had just left the school, only the two detectives knew that there had been a dead body and so were the only ones properly investigating.

Now Hazel is visiting Daisy at Easter for Daisy’s birthday, in her huge old house. Daisy’s parents are Lord and Lady Hastings and seem to be of a familiar archetype: ditsy, helpless mother and jolly father, with not quite enough money to keep the house up to its old standards.

There are perhaps less parallels to Blyton in this story, now we don’t have the familiar boarding school setting. It really is more of a Miss Marple or Poirot-style mystery, though there are shades of the Find-Outers, perhaps.

We start with a great many people arriving at Fallingford for Daisy’s birthday weekend. 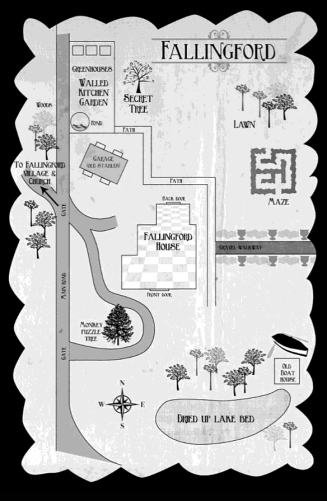 THE CAST (AND SUSPECTS!)

Aunt Saskia: an eccentric and badly dressed woman who seems to have an issue with kleptomania. She sneaks silverware into her handbag and is always eyeing up shiny watches that belong to other people.

Mr Curtis: Daisy’s mother’s friend, an arrogant art and antiques dealer who is there to appraise some of Fallingford’s items for sale.

Stephen: A friend of Bertie’s, also from Eton.

Uncle Felix: Much younger than the visiting aunt, Felix has an air of mystery about him. There are rumours that he is a secret agent.

Beanie and Kitty: two of Daisy and Hazel’s friends from Deepdean.

These people added to Daisy’s mother and father, Miss Alston the slightly odd new governess and the few members of staff makes for a real houseful!

The murderer is inconsiderate enough to wait until the middle of Daisy’s birthday party to strike. One of the guests complains that the tea tastes funny, and within ten minutes they are choking and retching and have to be carried off to bed. The doctor is called, and diagnosis dysentery, but cannot do anything.

Daisy and Hazel (and also Uncle Felix) don’t believe that it’s dysentery. Daisy and Hazel reason that nobody else is sick while Uncle Felix demands samples be sent off for testing. The Wells and Wong Detective Agency are ahead of him in their investigation though, as Daisy has recently read a book where it says arsenic poisoning is often confused with dysentery…

There are a whole cast of suspects roaming Fallingford – and none of them can go anywhere due to the storm causing flooding in the surrounding areas.

Daisy and Hazel conclude that everyone (apart from themselves and their school chums) must be put down as suspects.

Almost everyone has motive and everyone but the staff had the opportunity. All the guests were around the party-table and could have doctored the tea-cup.

Not even Daisy’s parents escape scrutiny. After all, Lady Hastings was caught kissing the victim and her father was seen demanding he leave Fallingford immediately. Then again, it could have been Aunt Saskia who had been greedily coveting that golden watch or Bertie with his famous temper. It could even have been the governess who has displayed some suspicious behaviours of her own (not least with that handbag of hers that she never, ever puts down).

It’s a big job, and it seems only logical that the two other Deepdean girls end up involved. Poor Beanie and Kitty were shoved aside several times in the early chapters while Daisy and Hazel snuck around. It turns out they knew all about the secret detective agency anyway.

RULING OUT THE IMPOSSIBLE

Various things are looked into over the next chapters but it isn’t until Lady Hastings is pushed down the stairs that they are truly able to rule anyone out.

Unfortunately the more people that are ruled out, the more likely it becomes that someone dear to Daisy is the culprit.

Finally the police arrive and move straight for the person that Daisy is most determined to protect, and it’s only thanks to a couple of genius realisations from Hazel that the girls work out who the real murderer is.

Much like in the first book I was rarely much ahead of the girls in their detectings, and I did not work out who the killer was until the last possible minute – a sign of a very good murder mystery.

As I said at the start this is an Agatha Christie style whodunnit, and it plays it like that the whole way through. Though of course, we have four fourteen-year-olds doing the investigating. These children are of comparable ages with the Find-Outers, the Famous Five, the Mannering-Trents and so on, and yet are rather more worldly when it comes to grown-up problems. They may feel very awkward when they see two grown-ups kissing (especially when it’s a married woman kissing someone other than her husband) but they are able to discuss it without any giggling or hysterics. They also touch on topics such as suicide, guilt, loyalty and honesty in a mature way for the most part.

On the whole it was a satisfying read – with which I only had one small niggle. If you were an undercover agent you would NOT bring with you a letter detailing the nature of your mission.

It may be a bit of a departure from what is considered traditional Blyton fare, but if you appreciate good children’s writing then you’ll probably like this.

This entry was posted in Book reviews, Other Authors, Reading Recommendations and tagged Agatha Christie, Arsenic for Tea, Daisy Wells, Hazel Wong, If you like Blyton, Robin Stevens, Wells and Wong Mystery. Bookmark the permalink.

4 Responses to If you like Blyton: Arsenic for Tea by Robin Stevens