The Mystery of the Burnt Cottage: How has Blyton’s original text fared in a modern edition? part 4

I’m determined to keep coming back to this every third week or so, purely so that it doesn’t take me a whole year to get through it! The other parts are here, here and here.

As always my own copy is a Methuen from 1957 – a 12th reprint/impression of the original. The new version is the most modern of any paperbacks I have looked at so far,  which is an Egmont copy from 2014. 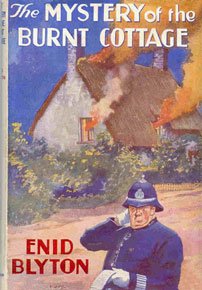 CHAPTER EIGHT: WHAT MUST BE DONE NEXT? 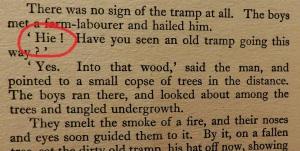 This chapter starts off quietly on the updates front. Hie, when the boys greet a farm-labourer has been changed to Excuse me. Perhaps they thought this sounded more polite. Talking of politeness, when Mrs Hilton is talking about Fatty, that fat boy has been cut to that boy, twice.

As previously, italics are just been chopped out whenever they appear. This time in we must get in first, and so he changed the subject quickly too.

Bruises have gone the way of italics too, it seems, and a few lines from Bets are cut. “No. He’s got some lovely bruises though,” said Bets. “The best I’ve ever seen. I guess he’ll boast about them till we’re sick of hearing about bruises.”

And then, after that fairly mild set of updates, the editor simply went mad and chopped out an entire page. That’s not even an exaggeration.

“Do you want to see my bruises?” asked Fatty.
“I’ve seen them,” said Bets. “But I don’t mind seeing them again. I like bruises best when they begin to go yellow, really. Pip hasn’t seem them, have you Pip?”
Pip was torn between wanting to see the bruises, and not wanting Fatty to boast and show them off.
Fatty didn’t wait for him to answer, however. He began to strip off various garments, and display bruises of many sizes and shapes. They were certainly good ones.
“I’ve never seen such beauties,” said Pip, unable to stop himself admiring them. “I never have bruises like that. I suppose it’s being fat that makes them spread so. Won’t you look lovely when they go yellow-green?”
“That’s one thing about me,” said Fatty. “I’m a wonderful bruiser. Once, when I ran into the goal-post at football, I got a bruise just here that was exactly the shape of a church-bell. It was most peculiar.”
“Oh, I wish I’d seen it,” said Bets.
“And another time,” said Fatty, “some one hit me with a stick -just here – and the next morning the bruise was exactly like a snake, head and all.”
Pip reached out for a stick. “I’ll give you another snake if you like,” he said. “Just tell me where you’d like it.”
Fatty was offended. “Don’t be mean,” he said.
“Well shut up about snakes and church-bells then,” said Pip in disgust. “Bets has only got to say ‘Oh, how wonderful,’ and you make up the tallest stories I’ve ever heard.

That’s a whole page, nearly 300 words, just chopped right out of the middle of a chapter! Having looked at a lot of updates I think I can see why this page might have given them a few ‘problems.’ Saying that, it could have been handled much, much better, with Fatty simply pulling up his sleeves to show off some bruises if they didn’t want him stripping off. I can’t see much wrong with the rest of it. There are countless current books about bottoms and bodily functions out right now, so I don’t see why a few bruises have been considered so offensive!

The first update in this chapter makes Fatty sound lazy and entirely uninterested in their investigations. Originally, he really was too stiff to want to do anything more that day, and so is left in the garden with a book. After his fall from the hay-rick, that’s quite understandable. The newer version is that Fatty really didn’t want to do anything more that day, with no explanation as to why.

Mrs Minns sister is described as a very large woman instead of a very fat woman. Is large significantly kinder than fat?

Mr Hick’s threats to the kittens has been cut again – Unless they are out of the house by this evening, I’ll drown the lot! This is despite the fact that a paragraph earlier the cats entered the kitchen as they flew through the air, landing on the floor with mews and hisses. And they were thrown by Mr Hick, no less.

There is one change here that I actually don’t mind so much – Blyton has capitalised Suspect in the middle of a sentence, seemingly at random, and this is ‘corrected’. If that had been the case throughout and it was a stylistic choice to have Suspects, Clues and Motives etc, then it would be fine. And as one correction is made, a mistake creeps in elsewhere. Generally hyphens have been removed throughout these updates, so I was surprised to see dis-heartened appear in the paperback. Checking the hardback, it is rendered as dis-heartened too, but appears at a line-break. I don’t know if it would have originally been hyphenated to start with.

Mr Goon no longer calls Mrs Minns Mam, he calls her Madam instead. This is a strange one, because although usually written as ma’am, mam – to rhyme with ham – is how the title is usually pronounced (if you are talking to the Queen, for example). I imagine that’s how Goon would have said it, so as a manner of speech it should have been left alone!

And lastly, the italics have all been removed again.

While chapter seven certainly should win an award for ‘most text cut’ I’m choosing to count each sentence – rather than each word! – and so, while it may seem like many more, it is only 34 changes. Added to those from previous chapters and we reach 103.

This entry was posted in Updating Blyton's Books and tagged The Five Find-Outers, The Mystery of the Burnt Cottage, Updated Text. Bookmark the permalink.

1 Response to The Mystery of the Burnt Cottage: How has Blyton’s original text fared in a modern edition? part 4