If you like Blyton: Dead Man’s Cove reviewed by Fiona

This is the first in the Laura Marlin series by Lauren St John. Stef read and reviewed it a while back, and when I spotted it in my library I thought I might as well give it a go.

OF LAURA MARLIN AND ORPHANS

Laura Marlin, our heroine, is an orphan. There are a number of orphans in Blyton’s stories, and even more children who lack one parent. Jack and Lucy-Ann Trent are orphans, being raised by an old uncle and housekeeper at the start of The Island of Adventure. And of course Philip and Dinah’s father has been dead a long time by then. Snubby, cousin to Roger and Diana is also an orphan, sent from aunt and uncle to great aunt and so on during the school holidays in the Barney series, and Barney himself has no mother. Other orphans, like Fenella in Come to the Circus also end up with an aunt and uncle. Tinker Hayling of Five Go to Demon’s Rocks and Five are Together Again has no mother, and I could go on for ages with more examples.

In Blyton’s stories, however, our orphans (and half-orphans) are past the stage of mourning their parent(s). There is a sense of stiff-upper lip about it all, and characters only occasionally give in to a moment of mild jealousy when they see others with loving parents. It’s all handled very stoically, though I wouldn’t say the subject was treated coldly or uncaringly.

Laura Marlin has been without her mother for her whole eleven years, five months and x days by the start of the book. While she doesn’t mope excessively about that fact, it is at the forefront of her mind as she prepares to go to live with her newly-discovered uncle. So instead of a fairly speedy Blyton-style first chapter before an adventure starts we have a slower build up. And that’s fine.

When I first picked this up and read the first few pages I was gripped with that slight melancholy feeling of there’s nothing really like Blyton. No matter how many books come out with that promising sticker saying if you like Blyton, you’ll love this, I have never found anything that’s truly like reading a Blyton. I even put this book down momentarily to ponder this more. And I came to the conclusion that this too, is fine. Blyton is Blyton and there’s nothing else out there that’s truly like Blyton. Instead there are great books that you and I will also enjoy if we stop analysing it for, to make up a word, ‘Blytonness’.

So I picked up the book again and kept reading. I can’t say that I stopped being aware of similarities and differences to Blyton, because I knew I was about to write a blog about it. But I did get quite lost in the story, enough that the not-Blytonness of it no longer mattered.

Anyway, as I said at least two rambles ago, Laura goes off to live with an uncle she’s never met. After that, we are fairly quickly immersed in the slightly strange world of St Ives, Cornwall. Uncle Calvin is kind, genial and generous, but hardly ever around. Mrs Webb, the housekeeper, is alternately falsely-over-nice and nasty. Mrs Crabtree, the neighbour, is always full of gossip and has a strange thing about seagulls. The kids at school are mostly non-entities as far as the story is concerned, apart from Kevin, who picks on Laura. Then there’s the Muhktars who run the local shop. Mrs M seems vapid and vain, Mr M comes across pleasant to your face and horrible when he thinks you aren’t looking, and their son Tariq who hardly speaks English and is what Mrs Crabtree calls ‘slave labour’ in the shop.

I don’t think there’s any great conspiracy going on in Laura not having any real friends to turn to but she is pretty isolated in St Ives. It doesn’t bother her too much (though she is quite upset when a fledgling friendship with Tariq ends prematurely) as she is just happy to have freedom, trust and a family at last.

The Dead Man’s Cove of the title is a little way along the coast from Laura’s Uncle’s house, and he expressly forbids her to go there as it isn’t safe. In fact the only rule of the house is that she is not to go there. This all makes it rather surprising that he then takes her to Dead Man’s Cove, saying she is allowed there as long as he is with her. He also points out the smuggler’s tunnel that is only rarely accessible at very low tides.

This would all be quite unusual in a Blyton book. Usually if you’re banned from going to that dangerous place you’ve been warned about you’ve got to find a way of sneaking there in the dead of night (without telling any direct lies about going. And without endangering any girls that might be with you).

It takes away some of the immediate mystery about Dead Man’s Cove for the moment, though. Well, I was wondering if the other end of the tunnel really was blocked up, but Laura wasn’t.

The real mystery then appears quite suddenly, literally in the middle of a footpath. It’s a message in a bottle, one that’s never been in the sea by the looks of it. Who put it there? And why?

Laura corresponds with the mysterious letter writer a few times, but meanwhile, she starts digging into her uncle’s past. She follows him out at night and discovers that one familiar face and an unfamiliar one are also following him.

I’m not sure how to explain all the rest of the story, but the mystery around Tariq (who ends up going missing), the letter writer and Uncle Calvin’s past all turn out to be smaller parts of the big picture.

With so many of Blyton’s reprints losing their illustrations it’s nice to see new books that are illustrated. Every chapter in this book has a picture at the start of it. They are by David Dean but are rather in the style of Brett Helquist who illustrated the Lemony Snicket books. 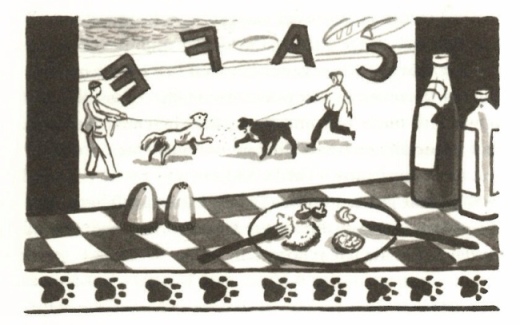 Unsurprisingly, I have quite a few thoughts. I enjoyed the start and middle of the book, while we didn’t know what was happening – though Uncle Calvin’s vague references to secrets were quite annoying. Usually adults deny all knowledge, but he would admit to having secrets and ask for patience and understanding etc.

It all got a bit silly towards the end, though. After the big reveal of Uncle Calvin’s secrets he and Laura start working together to solve the mystery and he pretty much tells her everything about his job and enemies.

Then there’s the problem with the bad guys plans and motives. If you’re going to ship in a secret cargo in the dead of night you want to do it as cleanly and quietly as possible. You might use a secret tunnel – sure – but not if you have to dynamite your way out of the end of it. That’s going to give the game away, rather. Especially when some of you get off the boat and get into a quiet, unobtrusive car and drive away. Realistically, they would just have used a van! The rescue of Laura and Tariq at this point also sounds kinda ridiculous – a dog leaping down a flooded mineshaft, down a tunnel and dragging two kids to a dry ledge. (It’s told as an afterthought the next day too, which doesn’t help.)

I also had a problem with the letter writer, as they had a dozen or more ways they could have communicated their problem. Instead they chose Laura to tell, and set up an elaborate series of secret messages in the hope that she would find them.

There’s also the problem of the timeline around finding the last message. Laura has two routes to school: the straightforward ten minute one or the meandering 30 minute one via the beaches. On the morning in question she gets up extra early so she can walk Skye (the dog) along the beaches, drop her off at home then get to school. She’s delayed for a while waiting for peace and quiet to pick up the message, then ends up running all the way home after Skye who’s run off. (Never mind that two pages previously, at the start of the walk she’s limping on a sprained ankle and then jumps down onto a beach and runs…) She thinks to herself that if she took Skye to the house and explained how to look after her to Mrs Webb she would be an hour late for school. So she takes Skye to school instead, and is still nearly an hour late. It just doesn’t add up!

And it irritated me that Laura waits for a document to upload when she’s trying to read a newspaper article online. Her uncle has a top-of-the-range laptop so a simple news article should appear very quickly – even if she had to download it.

I don’t mean to give a really bad impression of the book, honestly! Over-all I did like it, I just felt several flaws managed to creep in over the last third or so. If you don’t over-analyze motives and clues like I do, then you’ll probably enjoy this even more.

It has hints of Blyton at times – a storm was nature’s way of doing the laundry, thinks Laura, and after the waves have frilly cuffs. There’s the secret passage, of course, (though it’s a shame that Laura doesn’t get a chance to do any exploring of that before she’s dragged along with the smugglers), the faithful canine companion and so on. It’s probably more like Helen Moss’ books than Blyton’s, though, thanks to the modern setting. I hope that in future books Laura isn’t doing all her crime solving with just Skye for company, as I think I do prefer children’s detectives/adventurers to work in a group.

This entry was posted in Book reviews, Other Authors, Reading Recommendations and tagged Dead Man's Cove, If you like Blyton, Laura Marlin, Lauren St John. Bookmark the permalink.

1 Response to If you like Blyton: Dead Man’s Cove reviewed by Fiona