I know we’re only just inside the Christmas barrier but I thought that if I didn’t do this blog now, we’d run out of time and you’ll all be sick of Christmas things by then! I found the audio book of the Christmas Stories when I was working at different library a few weeks ago and thought I would give it a go. I know Fiona  reviewed the book last year but we agreed that another review wouldn’t be a bad thing as we do tend to focus on different things.

The main story – A Family Christmas

Susan, Benny, Anne and Peter are the three main characters who the main bulk of the Christmas stories revolve around. These little snippets bridge the gaps between all the little Christmas stories that Blyton writes for us to enjoy.

As you can imagine there isn’t much character development in these snippets as the CD case suggests that it’s good for children aged 4 and up. Well I’m certainly on the side of the up, but I think my brain demands for a more complex story in places. The sibling dynamic is pretty much exactly like any other Blyton family set up, the oldest who are the best at things and then the youngest, asking the strange and more babyish questions and causing the grown-ups and the older children to laugh at them.

It’s hard to tell who is the youngest, but my guess is that is Anne as she is the one who believes most in Santa and the stories that her parents tell the children. She is also the most excited by the traditions the family partake in.  She loves the mistletoe, the Yule log, the Christmas carols and has lots and lots of questions to ask about all of these things. Anne is also the one who seemingly believes the most in of the magical things that happen at Christmas.

From wondering why mistletoe doesn’t touch the ground and grows upside down in trees, to wanting to know the story of Santa Claus, the children pester their parents with intelligent questions to get to the bottom of this Christmas ‘mystery’. Their father tells all the children all he knows about Christmas, which is a lot more than their mother knows.

Blyton doesn’t only cover the purely Christian traditions but also some of the Norse myths and legends which adds variety and a change of pace to the narrative. We also get a lot of mentions about before the birth of Jesus, which is refreshing in a way, even though we don’t quite get into all the evolution story, it’s nice to have it acknowledged. For anyone who knows their Blyton, you’ll know as well as I do, that Blyton was a Sunday school teacher at the beginning of her adult life, which suggests to me that she had a fundamental belief in God. In fact a lot of this shows through, not only, in her Christmas stories but in her adventure books and everything else she wrote. Kiki for example does say ‘God save the King/Queen’ (depending on which edition you have) and the children in all the books always attend church and sing hymns.

The final result of the parts of the family Christmas conclude in the children meeting Santa Claus and hearing about how he came to be. They wake the next morning to find it wasn’t a dream and that he has left them lovely presents. So all’s well that ends well!

The Christmas stories that surround the family Christmas are many and varied. The range from little spoilt kittens and mice to Santa Claus himself. Children play a huge part in these stories, as in the main narrative, and each time someone learns something new or gets rewarded for being such a good person.

Although there are some funny stories in the mix, the ones that stuck with me the most are the ones that almost made me cry. There were lots of little stories about children who had been going without, whose mothers were ill, or had lost their purses and their fathers were away for Christmas. As I was listening to some of these stories while driving, I don’t recommend it unless you are really hard-hearted because the writing is beautiful, tender and pure in only an Enid Blyton book can be, so much so that it made me want to cry. The poor little children who were so brave to go without for Christmas, who were unselfish to give all their presents to other children even though they wanted them so!

If reading Blyton had ever taught me anything as a child it was to be unselfish is the best thing of all, and these stories really drive that home. The rewards the children get for being unselfish and caring are far greater than the ones who behave badly. As a young child, that strikes up a strong firm, life long message to live by and in this selfish world that we live in now, that is something we have lost. I do thoroughly recommend these stories to everyone, they are well worth your time to read and enjoy.

Jilly Bond I believe to be a voice I have heard from childhood as well. I think (though I am finding it hard to confirm) that she did a lot of unabridged recordings of the Blyton books, so when her voice floated over my sound system in the car, I was right back in the arms of a friend in a way. Her smooth, level soft voice takes you on the highs and lows of the stories like a dream, and you’re transported to the place of the stories, and feeling emotions you never really thought possible.

Bond certainly makes an excellent narrator and does a range of voices to go with the characters as well, which keeps anyone interested, let alone the children. The beauty of her is that there never seems to be any rush and her voice cradles you like a big fluffy pillow.

It is totally worth you finding this unabridged recording of the Christmas Stories by Blyton as they are simply terrific. I’m sure Fiona would still say the same about the book even this far down the line. Check with your local libraries if you can’t find a copy to buy, they might be able to lend it to you! 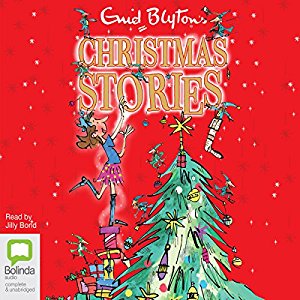