The first review of the new satirical Famous Five novels. These novels have been out for a while now but Fiona and I have asked for them for Christmas – luckily for me I got given a copy of Brexit as a early Christmas present from a family friend. How could I not take the chance to review it before the festive period just for you?

To start off the book starts in a very un-Blytonish way –  with an excerpt of a speech  that will happen later on in the book. We see Julian, giving a speech or rather, practicing his speech to an audience, which turns out to be Timmy. We then have a little flashback to the reason why Julian is giving this speech  and we find out that in a fit of post Brexit blues George declares Kirrin Island independent from Britain and part of the European Union. George and Julian take opposite sides on the argument with Dick and Anne playing the swing voters. We follow the rigmarole of the ‘campaign’ which only takes place over four or so days having been announced on Twitter after the Brexit vote had come in. Krexit becomes a media storm and the worst thing for George is the island becomes besieged with reporters who want to get the news of the story and its progress straight from the horses mouth –  so to speak.

The first impressions left me a little surprised I guess; it made me rather hopeful for a decent comical parody. The writing was in the style of Blyton, even if the speech between the characters is a little tongue in cheek, and some of the description is a little exaggerated. Then the changes start creeping in, the new technology and the new social media usage. These things aren’t traditionally Blyton –  as I’m sure you can tell –  but they are necessary in these books I think because otherwise you wouldn’t have them!

So to begin with the book appears to be a kindly poke at the original five but as I found out, it doesn’t really last that long!

As we dig deeper

For this lover of the original Famous Five the hilarity of the book soon begins to wear thin. There hardly seems to be a plot for a start; there is just a sudden declaration of independance and then it all sort of goes away when we get to the end. 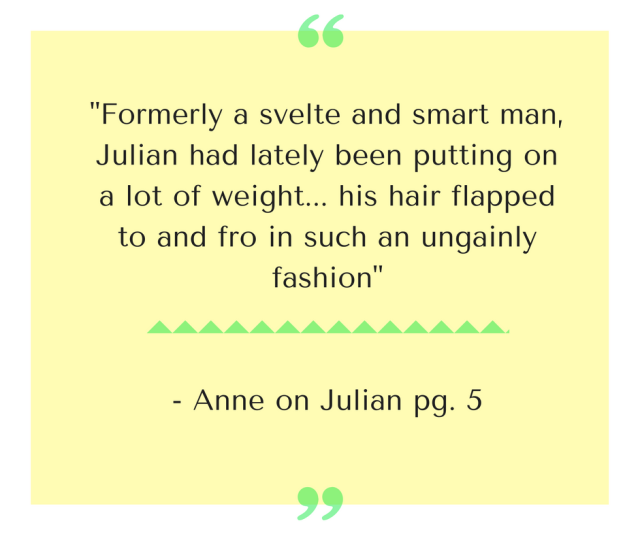 Julian, my beloved Julian, is turned from a svelte, suave young man into a BORIS JOHNSON lookalike, along with the disastrous media stunts that Johnson gets himself into. There is a parody of the zip wire moment, Julian gets stuck on the line in front of reporters. He tries to play them like an experienced politician but more often than not ends up coming off with a rum lot. It turns out that Julian is a Euro-skeptic and voted to leave the EU during Brexit. Later on the book we’re given a glance into him doubting his decision a little. My soft spot for Julian does not really extend to him becoming a bumbling buffoon like the ex mayor of London, Johnson. This does mean that I do find it hard to believe in the tongue in cheek manner in which this is taken. It became very personal.

As with the Brexit campaigns, there was no real flow to the story, no clear cut arguments to make your mind up on, but as a Stay voter I came down heavily on George’s side of the Krexit (gosh who thinks up these words?!) debate.

George’s character was perhaps the most well written of the seven main characters (six if you exclude Timmy, but we don’t). Possibly because she was Blyton’s best loved and well written character it is easier to write her and her feelings toward things than it is to write for the others. Poor old Dick barely gets a look in, while Anne skulks around the sidelines. Aunt Fanny and Uncle Quentin make an appearance but again they are nothing like the book, and Aunt Fanny even takes to showing Julian the cricket bat she hid on the island to stop Uncle Quentin when he got too amorous.

The last thing to really look at is the language. Now in the TV spoofs with Dawn French and Jennifer Saunders even though they are poking fun at the Five, the language is basically the same, just born of innuendos. This isn’t. As soon as Bruno Vincent starts bringing in the modern language, and having George swear and shout at her parents in a non-respectful manner, this book stops being funny for me. It it was more in the style of Blyton I could laugh, but unfortunately this detracts from the fun for me.

Who the Blyton is Rupert?

We have a new character to explore in this book, though I suspect he appears in the other parodies as well. I don’t strictly know if these are supposed to be read in any order, and I suppose we will find out.

Anyway, welcome to the fold Rupert Kirrin! He appears about half way through the book, an apparently the cousins aren’t very pleased to see him; they’ve come across him before and he is a dodgy character and they have tried to put him in prison but that has failed. With this said and the promise of adventures needing to be told hanging in the air, you do not trust Rupert at all, especially when he tries to become a PR and Media manager for the five and their Krexit campaign .

In this book we never do work out who he is related to the Five, apart from the link of cousin and lets face it, us in the Blyton community know how to debate the idea of cousin very well (google the Kirrin/Barnard discussion on the Enid Blyton Society forums if you don’t know what is going on). I hope that Mr Bruno Vincent does expand on this in is other spoofs, not that I can say I’m looking forward to reading them much.

Basically, not impressed. I’m sorry but there you are. The book was funny enough I suppose, up until my pet peeve of the band language slips into gear, but I just can’t find this funny. Not when Brexit and the devastation of the result swept over me is still quite a nasty reality for me to wake up to every day. It could have been less political, and a bit more light hearted. Topical, yes very, but it won’t age well. In a few years this will be consigned to the scrap heap just like other topical parodies.

One quote from the telegraph, doesn’t sit right with me:

A “Gentle Parody”?! GENTLE? This is nothing but a cleverly disguised political romp in places. The other spoofs may not be so bad, but Brexit island, for me, goes to the bottom of the pile.

Looking for something else to read? More Famous Five for Grown-Ups reviews can be found here.