Famous Five for Grown Ups: Five Go on a Strategy Away Day

Stef has already reviewed Five on Brexit Island and Five Go Gluten Free. She did not heap praise on those titles, and I’m afraid my review is likely to be equally negative. To save you reading further if you don’t have a lot of time: I didn’t think it was very funny, I didn’t think it was particularly good. 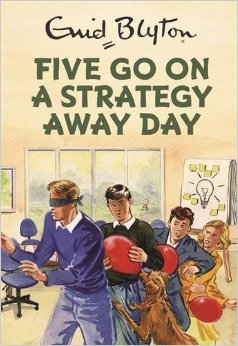 As is clear from the title, the Five (including Timmy) are going on a strategy away day. Julian is a manager in a company called Lupiter Funkstein, and has managed to wrangle Dick, George and Anne into taking more junior positions there. What’s more, they’ve all landed in his team.

They take a train to a country hotel where the strategy day is being held, and join the rest of the acquisitions staff in their designated room. The Five (well, four, as Timmy’s left outside) do a few team-building exercises and fail miserably at them all, before the final challenge is revealed.

The last thing they have to do is follow a map to a designate point, collect a flag and return first. Despite all their experience the Five bollock this up too, but manage to randomly overhear a critical piece of information while sheltering in a barn. Someone’s out to sabotage Lupiter Funkstein and the Five are able to scupper them now and somewhat redeem themselves.

I had problems with quite a few things along the way.

First, to make it clear, I have no problem with having a grown-up Five doing grown-up things. I myself have written lots of stories about some of Blyton’s characters in their older years. And there is drinking, bad language and other adult content.

My issue here is that the adult things seem to be thrown in simply for ‘shock’ or ‘humour.’ “Remember that bossy lad, Julian? Well har-de-har he’s now an unpopular, hung-over middle-management fellow.” It’s cheap and pretty tasteless. If you’re going to make them grown-up and dealing with grown-up issues you have to have context, and there has to be some feeling behind it. Not just transposing a familiar character into a new situation.

For example, it starts with Anne saying she loves a good train journey. Immediately we think of the steam trains and beautiful countryside of the original books. Then we have Dick extricating himself from a sweaty armpit and it is revealed they are crammed into a tube carriage at rush hour. Not a bad idea – a bit of bait and switch. I don’t know if it’s the particular language that’s used (the word frottage comes to mind) or just the relentlessness of unpleasant moments but it just ends up seeming… tawdry? Seedy? It’s just not nice.

Anyway, that aside, there are other issues.

The Five have somehow lost all their smarts, skills, and what made them the Five in the first place. They can’t navigate a simple map, they seem to have lost their fondness for each other somewhere, and don’t seem to have any sense of fun any more. Particularly when they are asked to suggest ‘roles’ for each other, and what those roles can represent. i.e. Julian, the boss, someone who doesn’t listen to anyone else, is impatient and domineering and so on. It’s rather unpleasant seeing them being rather nasty to each other like that. Especially with no context as to why their relationships might have soured.

There’s a random cousin who crops up, who we’ve never heard of before.

There were some moments I thought which did have potential. They stumble across the Secret Seven at the hotel (though it’s not clear if they work for the same company or are just attending the same event) and there’s a strong rivalry there. That was slightly amusing, but again was rather spoiled by the nasty and jaded attitudes of all involved. The ending where the Secret Seven manage to foil an even bigger plot than the Five (caused by the Five sabotaging their hike) was a nice idea – but nobody likes to see their favourite characters trashed quite as thoroughly as our Five were, so it also felt like a bit much.

I also thought that in a different universe, the minefield challenge could have been funny. This task involved Julian blindfolded and having to lead the others across the room, avoiding the paper mines. The followers have to direct him, but they are not allowed to say left, right or forward. It starts off OK, but as they then get banned from consistently using east and west it descends into a bit of a farce.

I think with a bit of physical on-screen comedy that could have worked well on a sit-com. In a book it still fell a little flat.

The humour around the pointlessness of these team-building days wasn’t bad over-all, but it has already been done to death really. We’ve all seen jokes about how out-dated thinking outside the box and blue-sky thinking are, and it’s not really enough to sustain a whole book.

It wasn’t offensive (at least not to me) and it wasn’t dreadful. It just wasn’t very good. It raised a small smile from time to time and I’m sure there’s somebody out there who will find it very funny, but it didn’t do much for me. It lacked any affection for the Five which was its biggest downfall.

And I really do disagree with the idea that Enid Blyton would have loved them. I can’t imagine she would have particularly liked what I write about her characters (but then again, if the naked tennis is true… she might!) but I don’t proclaim that she would.

This entry was posted in Book reviews, Other Authors and tagged Bruno Vincent, Famous Five for Grown Ups, Five Go on A Strategy Away Day. Bookmark the permalink.

1 Response to Famous Five for Grown Ups: Five Go on a Strategy Away Day