The second part of Five Are Together Again, makes for interesting viewing. In this blog I will look at the differences and changes from the novel  and as usual we will find out whether the changes are good or bad. You can catch up with part one, here.

As we already know Five Are Together Again is one of the least favourite Famous Fives written, and it’s easy to see why. It should have been a really good story as the actual plot has some good parts to it, but there is something about it that falls flat. The last episode proved to be a good one however, with the writer Gloria Tors appearing again to take all the handy little details and turn them into a well planned episode.

You can’t fault Gloria Tors for keeping as much of the story arc as possible, and the best bit was the copying of the secret papers to take over to Kirrin Island and I enjoyed the fact that they still allowed George to row out to Kirrin Island with the papers and not changed it to one of the boys going. A subtle win for the girls there – I’m sure Enid Blyton would have been happy with that.

The scenes with Tinker are some of the most amusing, he’s a very unique character and retains some of his idiosyncrasies from the earlier book and episodes. In the 90s series the young, hyperactive Tinker was replaced with a much older an grown up Tinker, so having Tinker significantly younger and still car mad and a blabber mouth is all that more pleasurable for a true Blytonian. Another fact being that between the chimp, Charlie and the monkey, Mischief, half the time the small frame of Wayne Brooks is lost under those magnificent apes and its quite funny to see him struggling along, trying to carry them.

The focus moves away from the Five somewhat in this part of the story, which isn’t too bad a thing, and Tinker has his starring role. It does lead to some interesting dialogue between Tinker and the others and between the Five about him. George for example keeps having a go about Tinker’s tendency to blab about his father’s secret work to anyone, and Tinker gets very annoyed at one point. However when he is told to go and blab to Mr Wooh and Sam to smoke out the bad guy, the Five are worried he might not be able to remember everything, but George reassures them with this:

This means at least they have faith and confidence in Tinker to help them out when they need him to!

We start the episode by Jenny being awoken in the night by the sound of someone or something climbing the tower where Professor Hayling does all his experiments and keeps his papers. Jenny rouses the household and for a moment the professor doesn’t believe that there was anyone actually trying to break into the tower and Jenny dreamt it all when they discover Charlie the Chimp in the bushes by the tower – this isn’t something that happens in the book, they don’t spot Charlie in the bushes and they don’t suspect him of being up the tower until the very end. Overall the idea of Charlie being able to steal the papers is a strange one, even in the book, because as Julian and Dick point out: 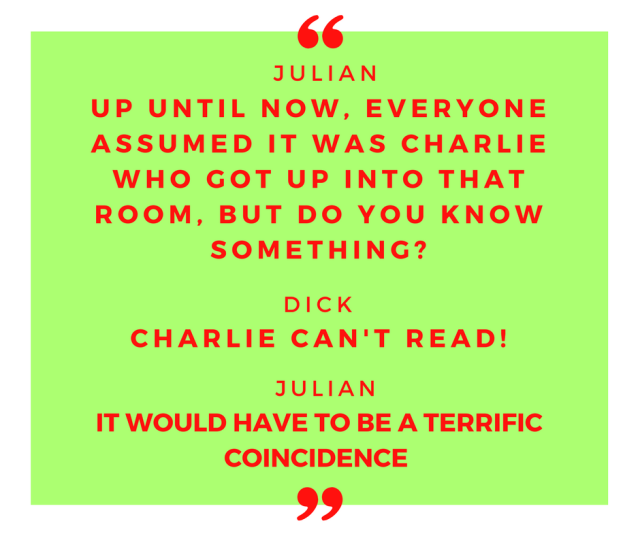 It is a fair point, Charlie wouldn’t have known what to take and the suspicion then moves onto Mr Wooh’s nameless assistant – eventually. This was a good addition to the TV show and shame it wasn’t thought of to go in the book.

The ending of the story was a bit rushed however, whereas the rest of the episode was well paced, even if it was a little slow which led to the rushed ending. I think we are more than established with the fact that 25 minutes is not long enough to either condense a Enid Blyton into for the telly and even two parters sometimes don’t get the balance right and this one left a lot to be desired. The dramatic ending where George is caught by the men and is thrown into the dungeons with a captured Sam, and they escape, not to mention the whole rescue with the rest of the Five and Uncle Quentin.

There really isn’t too much to fault on this episode as with the other one, they are literally only little things but I am beginning to think that this might be down to me not having read the book as much as some of the other Fives. I do wonder if that has a bearing on anything I’ve been saying.

Do you think the fact that I’ve not read the book as many times could lead to a less critical analysis of the TV shows? I think it might be a possibility.

Anyway as I was saying, this episode apart from a few bits and pieces which are mildly frustrating this episode of Five Are Together Again comes out quite well overall.

This entry was posted in Blyton on TV and tagged 70s Famous Five TV Series, Charlie the Chimp, Five Are Together Again, Mr Wooh, The Famous Five, Tinker Hayling. Bookmark the permalink.