Well this is embarrassing. I was tidying up all the images I have saved on my laptop from various blogs (I know, I know, I should save them in the right place in the first place instead of just dumping them wherever…) and spotted a folder marked Round Up. I was momentarily stumped. Then I remembered we had been doing these round up posts. Huh, I thought. I don’t remember doing one recently. And as it turned out, we haven’t. The last one was in December, talking about what we did in November. Whoops!*

In my defence I am the organisational force behind the blog (read that as big bossy control-freak if you like) and I have had a lot on my mind what with being pregnant, feeling fairly lousy with it, and also writing a lot of extra posts for my maternity leave (I have done about 12 posts in a month).

Anyway, as I know you are all dying to know what’s happened in the past months here it is:

WHAT I HAVE READ IN THE PAST FEW MONTHS

Unfortunately not an awful lot, as I have been very tired! 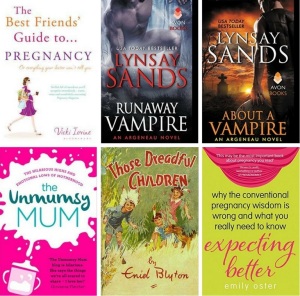 Didn’t do too badly in December actually even if a few of those were very short.

I’ve got a few more books on the go at the moment as well.

WHAT I HAVE WATCHED IN THE PAST FEW MONTHS

I can’t even pretend to know what month I watched what in, so I’ll just put them all together.

There have been other things on in my house – like How to Get Away with Murder but I’ve been tired in the evening and haven’t paid enough attention to really say I watched it.

WHAT I’VE DONE IN THE PAST FEW MONTHS

Well that was pretty long, so Stef’s round up can have its own post now!

*Language made more suitable for the blog. What I actually said is unpublishable.

This entry was posted in Personal Experiences and tagged December, Doing, February, January, Monthly round up, Reading, Round Up, Watching. Bookmark the permalink.