As we know, I managed to lose the track of which Famous Five episodes I had reviewed, which is why we have come back to Five Run Away Together. I completely skipped it for some reason! Anyway shall we get on and have a look at the episode?

Adapted by Gail Renard, Five Run Away Together starts with the arrival of Mrs Stick and Mr Stick and Timmy being less than pleased. Mrs Stick mentions that she’s usually quite good with animals and George doesn’t exactly trust his instincts which she usually does without a shadow of a doubt.

The reason that Uncle Quentin and Aunt Fanny are going away and taking Rogers with them is because Uncle Quentin’s mother has been taken ill so they need to look after her and Rogers will be tidying the garden –  a big difference from the book where Aunt Fanny has to go to hospital and have an operation and Joan the cook has a broken leg, I think. Anyway, the fact that Uncle Quentin is supposed to be the brother of Julian, Dick and Anne’s father rather begs the question that, if the Ju, Dick and Anne are being sent to Kirrin, doesn’t that mean that Quentin’s brother can go to their mother instead of Uncle Quentin rushing off? I know that would mean no adventure because the parents would be around to stop the Sticks in their dastardly work, but don’t you think that there’s something in that? I mean makes sense for them to take turns I suppose. We’re not actually told what is the matter with “Granny” only that she’s not very well but judging by the reactions of the cousins when Aunt Fanny apologies for leaving them so soon, they know what’s going on and are worrying as well. All very tricky!

Almost as soon as Aunt Fanny and Uncle Quentin have left Mrs Stick starts laying down the law and after Timmy has had an apple thrown at him by Mrs Stick’s son, Edgar, he is locked up in a shed and the key hidden. A midnight excursion sees Timmy set free and the decision to leave Kirrin cottage and live on the island is formed. We don’t have the wonderful build up of the Five packing and deciding to get the fresh bread from the bakers and piling the boat up high with rations. In fact the whole thing is rather less thrilling, and down to the discovery that Mr Stick is trying to move the boat and the decision to leave as soon as they find out that Timmy is going to spend the rest of Mrs Stick’s visit in the village.

The last change I want to share with you is the lack of a kidnapping, and little Jennifer Armstrong. We actually have a whole change of plot and its down to an escaped convict being housed on the island until the Sticks can get him away. So its a complete change of situation really, and I’m not entirely sure why!

Without a doubt the special guests made it for this episode, especially when the gentleman playing Mr Stick turned out to be none other than the second Doctor himself, Patrick Troughton. Barely recognizable as the second Doctor, Troughton makes a perfect crook, though probably not the right kind of Mr Stick –  who is a sailor in the book, or at least thought to be one. Without a doubt, Troughton was one of the ones who could turn his hand to anything. Long ago in the dim and distant past, somewhere on the internet there was an article written by Gary Russell, who played Dick, talking about his memories of the time he spent filming and even though I can’t remember exactly what he said, I remember him talking about how much he liked having Patrick Troughton on set. I wonder whether this gave Russell the first big buzz to get into the Doctor Who production family – how I wish I could ask!

Anyway, moving on, I also liked the inclusion of Edgar –  the Stick’s son – who is thoroughly nasty and sings those horrible songs at George. He’s a much more lively Edgar than that of the 1990s TV series who always seems lethargic and bored. The fun part is finding out that Julian and Anne swapped Edgar for Dick and George, who had been imprisoned by the Sticks in the dungeon.

For such a slow beginning, all the adventure rushes to the end, and when the Five trap the Sticks and the convict in the dungeons and head for their boat once more, the unexpected appearance of a new boat on the shore and a figure no one can make out, puts them all into panic stations and they make to pounce on this new stranger. Who then turns out to be Uncle Quentin! Whoopsie!

Some of the dialogue that was inserted into the episode was very much in keeping with what we have come to expect from these Famous Five episodes. Renard’s adaptions don’t carry as much of this as some of Gloria Tors’ for example, but when she does insert it into her script it is amusing.

Upon their arrival at Kirrin station and Rogers picking them up in the car, Dick greets Rogers in a rather friendly way, knowing that the gardener is hardly ever happy to see them, where as Julian is the one who makes the silly comment. Rogers looks less than impressed but for me it is one of the only lines that stood out in the episode. 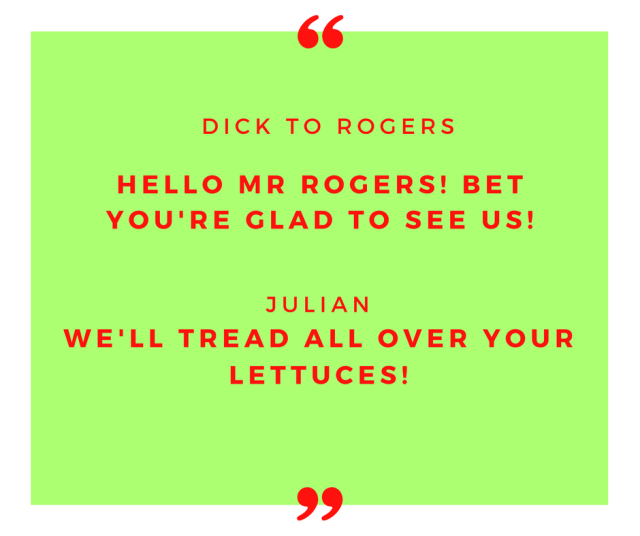 Now tell me that’s not amusing!

So it’s not word for word what it is in the book, but show me a TV episode of either series that is. The problem with this one is that because it changes so much from the book, it’s trying to become its own story while being true to the original. As a stand-alone, it would have been a brilliant episode and I think whoever decided not to allow the writers of this TV series to write their own episodes for a third series shot themselves in the foot, because all the writers – even if I haven’t liked the episodes – did a wonderful job with their episode whatever they did to it. Renard’s Five Run Away Together would have been a very good stand alone story with a few names changed and maybe the odd plot tweak here and there but as a version of Run Away,  it doesn’t come anywhere near Enid Blyton’s original, which is a shame because its actually one of the stronger episodes!

Anyway, please let me know what you think of this episode!

3 Responses to Famous Five 70s Style: Five Run Away Together