The Children at Green Meadows

The title of this book doesn’t give much away, and it could be a story about just about anything. It would probably be classed as one of her ‘family’ books, I have it on the shelf beside The Family at Red-Roofs and House-at-the-Corner.

It could also be considered as an animal book, as that is the other main theme. I like family books, but I’m one of those strange people who doesn’t particularly love animals. I mean I don’t go around kicking puppies but I wouldn’t want a cat or dog myself and if you ask me what my favourite animal is… well, I don’t really have one. I visit zoos and aquariums occasionally and I like to spot squirrels and buzzards when I’m out, but I really wouldn’t call myself an animal person.

Because this book is about the family and the animals I still enjoy it though, but Blyton has the ability to have you enjoy a book even if the subject isn’t something you would normally read.

I’m not sure if I’ve read this more than once before. I certainly had a 1992 Dean edition when I was younger, it’s possibly one I read later on when I had nothing else new by Blyton as the cover didn’t really appeal to me. I have a hardback now (second impression) but I’m not certain if I read that edition when I got it. 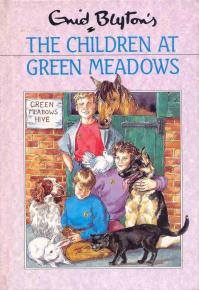 Before reading this week I jotted down my recollections just to see if I was right:

And that was about all!

CHAPTER ONE – A LOT OF EXPOSITION

It turns out that it was Daddy in the wheelchair, but they do live with Granny as it’s her house so I obviously muddled the two. The cause of Daddy’s disability – a back wound in the war – is explained, and how they came to live with Granny, how the house is run down and yet she won’t sell and so on. This is all explained by Francis, the eldest boy, and Mother having a conversation with a lot of ‘and you knows’ in it. It unfortunately does come across as exposition as there’s no need for two people who have lived through all that to stand and explain it all in great detail to each other.

Anyway, apart from the unfortunate exposition my lasting thought from this chapter is that Granny doesn’t seem very nice! OK, so she allowed the family to live in her house for a long time (while she was elsewhere it seemed) so that would have saved them money perhaps. But now she has moved back in and refuses to sell. No ‘decent’ daughter would move out and leave an older lady struggling in a large house so Mrs Marshall is forced into over working herself caring for an invalid husband, three children and a large house.

It’s honestly like a conversation you would read on Mumsnet.

“Am I being unreasonable?” asks MotherMeadows. “My mother let us live in her home free of charge for a long time, but now the house is too big and unmanageable. My husband is wheelchair-bound and we need a more accessible property but she won’t sell. Can I move out and leave her alone after all she’s done for us?”

There would be two distinct types of response,

YANBU (you are not being unreasonable). Yes your mother did you a kindness but you don’t owe it to her to stay forever somewhere that isn’t suitable for you. Have you made it clear she would be welcome to join you in a new house?

And on the flip-side,

Yes, you are being VU! (very unreasonable). Your mother let you live in her house free of charge for years and now you want to leave her in a house she can’t afford on her own?

I think I may have strayed into Duncan McLaren territory now – making up imaginary scenarios so I will move on.

Housing aside, Granny is the sort to pick faults with people and be quite difficult to get along with. It’s said a few times that she is really kindly though, and would do anything for anyone, but I don’t often find that having one good quality negates the effects of nastiness. She also wears ‘many chains’ and thus jingles when she walks. Very odd.

Mother does seem to work very hard though, and the poor children have quite a lot put on their shoulders too, and not just from Granny. Even Daddy wishes that Francis were older so he could act as the man of the house. 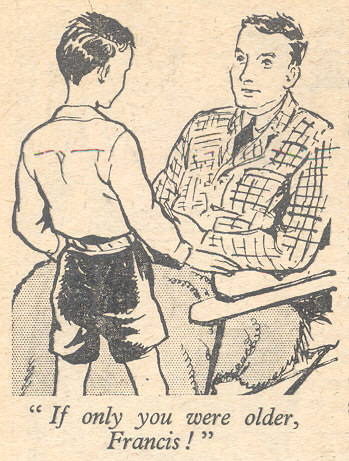 CHAPTER TWO – THE (DISHONOUR) OF SCOUTS AND CATS

A lot is made of the fact that all three children respectively belong to the Scouts (Francis) the Brownies (Clare) and the Cubs (Sam). For those of you unfamiliar with the idea, all three are groups inspired by Robert Baden-Powell who was involved in the Boys’ Brigade and then wrote his own books on Scouting. He trialled the first scout group in 1907 (on Brownsea Island no less, which may be why Scouts are the only folk allowed to camp there now) and then lots of others were modelled on his work, and in 1910 his sister began the Girl Guiding movement which includes Brownies and Guides.

They both instil the idea of doing a ‘good turn’ every day, and of putting others before yourself. It’s interesting as in many Blyton books the moral compass is defined by Christianity. They do pray a few times in this book but for the most part their good and selfless behaviour is attributed to their scout groups.

Francis lets the Scouting side down by allowing himself to be goaded into a fight with another boy. He had been wandering around pretending he had a dog (as he longs for one) and when this bigger boy teased him and tried to ‘steal’ the imaginary pet Francis ends up fighting.

Blackie (Granny’s cat) also gets himself into a fight in this chapter and it shows a slightly nicer side to Granny as she worries about him.

After the fight Francis’ imaginary dog just won’t reappear for him, so it’s really somewhat ironic that the unkind boy from earlier then turns up at Green Hedges begging them to take his own (real) dog in.

This is because new blocks of flats have gone up near Green Hedges, on what used to be farm land, and the landlord has declared no pets are allowed. You would assume this would be made clear before any tenancies were signed, but no, everyone has a week to get rid of any animals. So the boy, Dan, wants Francis to allow Rex somewhere to stay but he will come over to feed and walk him.

Being a Scout and therefore a good person, Francis puts aside the fight and agrees. I’m always astonished how quickly Blyton’s children forgive and forget real nastiness.

It’s not unusual for Blytonian children to keep a secret from their parents or whichever adults are responsible for them. However it is generally stated that they mustn’t outright lie, and you may only say “I don’t know where he is” if you genuinely don’t know his exact location because he carefully didn’t tell you before he went. It is also acceptable to say “I can’t tell you where we have been because it is a secret,” as long as you accept the punishment with grace.  Usually they get away with it as the parents never ask the right questions and not admitting something isn’t the same as lying.

Here, however, the children choose to keep the dog a secret as they believe that the adults would tell them they couldn’t keep him. They blatantly get asked where they have been after constantly disappearing to tend to Rex and they never seem to use the “I can’t say.” They just mysteriously manage to not answer.

Considering they are keeping a reasonable-sized dog at the bottom of their garden it isn’t too surprising that Granny finds out. She is quite happy though – she misses a dog she had a long time ago – and agrees to keep it a secret from Mother and Daddy.

Mother still finds out though – when Dan’s mother, Mrs Oldham, comes to thank her for keeping Rex. Mrs Oldham then insists on doing something in return – by coming in a morning a week to clean and work around the house.

There are a few interesting insights like that in the book – showing us the differences to people’s lives when they moved out of older homes and into new flats with all the mod-cons. Mrs Oldham suddenly has a lot of time on her hands – perhaps she has a washing machine and tumble drier now, instead of having to hand wash and ring out all her clothing and linen. A small new flat would also be easier to keep clean and tidy.

Of course there were drawbacks at times, when close communities were separated and moved to different new homes where there wasn’t a community spirit at all.

This chapter also sees a kitten arrive. A little girl’s family have also moved into the new flats and her new birthday kitten has to go – again this seems slightly poor planning!

I think I have written enough for one day now! But so far we have a very promising menagerie and various problems still to be dealt with.

The Children at Green Meadows part 2

4 Responses to The Children at Green Meadows