So I have worked out where I would put ten of the books, my top eight and bottom two (you can read earlier posts here and here and so now I have reached my ‘middling favourites’.

THE MIDDLE OF THE ROAD

I found it harder to put these books into categories. I love the whole series so it seems mean of me to put books I like in a lower category. I just have to remind myself I’m saying I like these less not that I don’t like them at all. They are all favourites in a way.

So those would be Five Go Adventuring Again, Five on Finniston Farm, Five on Kirrin Island Again, Five Fall Into Adventure, Five Have a Wonderful Time, and Five Get Into Trouble.

Having broken them down into a smaller group I can quite confidently and easily say that Five Get Into Trouble will be next on my list. It probably wasn’t far off being in the previous post, actually. It is perhaps even on an equal footing with Fix but something had to come first.

While I very much dislike Richard (but I think you’re meant to) it doesn’t colour my perception of the book too much. He certainly redeems himself fully at the end. Rooky is a frightening baddie, and Mr Perton and Hunchy are certainly enough to threaten the Five once they are trapped inside Owl’s Dene. Owl’s Dene itself is a good setting, after we had fun with the freedom of their cycling tour, it works as a place to have them holed up. The kindness of Aggie, and the children’s in return is a nice touch too. And while there isn’t a secret passage, there is a good hidey-hole instead.

I think I will put Five on Finniston Farm next then. It’s a great book but perhaps not as exciting all the way through. They are on the farm much of the time and although in a bit of danger at the end, it is fairly tame the rest of the time. The Five v. Junior is amusing, you just want to smack Junior most of the time, don’t you, so George getting her own back is great, and I love the old story of the castle. And of course there’s a secret passage, they always go down well. 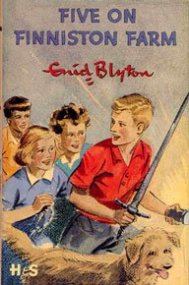 THE PROBLEM OF VAGUE TITLES

I do find some of the titles in this group can be confused – as they are rather vague. Ones like Trouble and Fix I have no trouble identifying but Wonderful Time, Fall Into Adventure and Plenty of Fun often need a moment to figure out.

But for the moment I’m having trouble ranking Wonderful Time, Adventuring Again (which I don’t have trouble identifying) and Fall Into Adventure.

I have plumped for having Five Go Adventuring Again next. I like the addition of Kirrin Farmhouse to the history of the area (even if it isn’t utilised again in the series), and it has not only a secret hidey-hole but also a secret passage. Whilst, naturally, I dislike Mr Roland and the fact he manages to ostracise George, it is worth it in the end when she turns out to have been right all along.

And then I will have Five Fall Into Adventure. Not only is it based in Kirrin (which can often help a book edge above an alternative) but there is far less adult help in it. Ok there’s Joanna – and although she’s tough enough she lets the children deal with all the adventuring themselves. I like Jo (but as she appears in each of the books I was choosing between that didn’t help much), and she’s quite an enigma in Fall Into Adventure. You’re never sure whether to really trust her or not. The end section of the book, with them going up to Red Tower’s place is exciting (and we can laugh at how useless the henchmen are). Oh and there’s also the absolutely priceless part with Sid, who is partial to chocolate mould, being temporarily kidnapped and ‘forced’ into playing happy families.

That means it’s Five Have a Wonderful Time next. Jo crops up again, saving the Five just in time from the difficult fair-folk. I like the setting and the rescue of the scientist but it’s a bit annoying that the Five have so many adults along so that ultimately pushes it lower down the list.

And that just leaves me with Five on Kirrin Island Again. This ranks fairly low for a Kirrin-based adventure. I do like it – mostly thanks to the end portion with George and her father and the escape from the undersea tunnels – but I don’t really like poor Martin and he rather drags the book down in my opinion. As does the fight between George and her father over the island. I have to say I’m entirely with George on this one. Quentin has all term-long to use the island, so to commandeer it while George and her cousins are home – without any sort of “I’m so sorry,” just seems selfish. He doesn’t seem to understand or care he is being an imposition there, and his (and Fanny’s) attitude irks me. 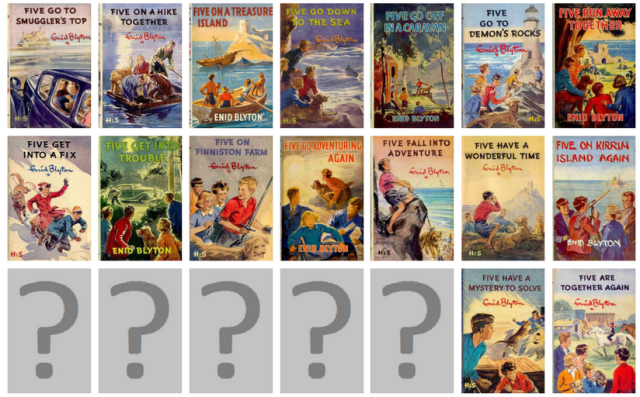 How does my list compare to yours? Have I still missed anything you think is a cracker of a story?

This entry was posted in Personal Experiences, Reading Recommendations and tagged Five Fall Into Adventure, Five Get Into Trouble, Five Go Adventuring Again, Five Have a Wonderful Time, Five on Finniston Farm, Five on Kirrin Island Again. Bookmark the permalink.

4 Responses to Putting the Famous Five in Order, part 3