For those who are unaware – I have a shameful secret. I have never read The Enchanted Wood or any of the other Faraway Tree books. Take away my Famous Five Club badge and don’t tell me the next password for the Secret Seven’s shed, that is how heinous a crime I have committed.

But here I am about to put it right! I have all three in early(ish) hardbacks – one of them even has a dustjacket! – but I never had them as a child so that’s my excuse.

WHAT DO I ALREADY KNOW?

I may not have read the books but I have a rough idea what they are about. Three children visiting a magical tree called The Faraway Tree, and at the top they can visit whichever magical land is there at the time. I believe sometimes they have wonderful fun and other times get themselves into trouble. I have read many a mention of the tree’s features like the slippery-slip, and its inhabitants like Dame Slap, Moonface, Silky the Elf and the Angry Pixie so let us sally forth and meet them properly!

Jo is not short for Josephine as in other Blyton titles, as Jo is a boy and the older brother to Fanny and Bessie. The three are typical Blyton children from the outset – they can’t wait to move from their smelly, dirty town and into the countryside.

You won’t have any more adventures in the country than you will have in the town. I dare say you’ll find it all very dull.

Well, I expect he will be proved very wrong, don’t you?

Its name is actually The Enchanted Wood, that’s not just what the children call it.

A week after moving, they finally get to visit the wood with their packet of sandwiches and a bottle of milk. They supplement this with some wild strawberries and as they sit to eat a very strange thing happens. Six toadstools grow out of the ground before their eyes. They may be town children but they know that this isn’t normal. The wood doesn’t just feel magic – it IS magic.

This is proven without a doubt when along come a group of brownies.

They stumble upon the tree when they chase an ugly gnome up it, having stopped him stealing the brownies’ bag. The brownies are afraid of the tree and warn the children not to climb it – as you never know where you will end up.

Naturally the children ignore this! Jo, as the boy, worries about keeping his sisters safe but he reasons they can’t get into too much trouble if they only look at the land at the top of the tree.

Only it isn’t that easy to find the tree! I’m desperate to know what land they visit first but first they get stuck because the trees are too close to get through, then they find a pond with yellow water. I can only imagine that either grown-ups never venture into the woods or they somehow can’t see the weird things that go on in there!

They end up calling on the brownies for help – and we get a funny but unusual bit of humour from Blyton.

I didn’t think rabbits got the measles said Bessie, astonished.

They more often get the weasels, said Mr. Whiskers. Weasels are even more catching than measles as far as rabbits are concerned.

He grinned as if he had made a huge joke, but as the children had no idea that weasels were savage little animals that caught rabbits, they didn’t laugh.

The measles/weasels joke is a funny one on its own, and I’m sure Blyton just wanted to explain what a weasel was to her audience but it ends up as quite dry humour ending on ‘the children didn’t laugh’. 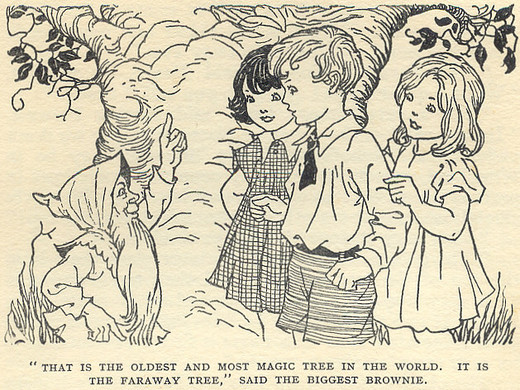 As soon as they climb the tree they discover it’s not an ordinary tree – beyond the fact it branches into magic lands, I mean! It grows acorns but also conkers. And it has windows!

THE FOLK OF THE FARAWAY TREE

Behind the window is our first denizen of the Faraway Tree – the Angry Pixie. As his name suggests he is not happy to find three children climbing past his house. He throws water at them and complains that people are always peeping into his window when they pass.

Undeterred they decide to knock at the next house, which has a little yellow door. That’s brave of them!

It is Silky who lives there so they are quite safe. She invites them in and offers them pop biscuits, which actually go ‘pop’ when you eat them and fill your mouth with honey.

Silky tells them about other inhabitants like Mister Watzisname who doesn’t know his own name and Dame Washalot who does a lot of washing and pours water down the tree. On their way up they see the former asleep and snoring and the latter pours her water right down on Bessie.

This is such an important book that I’d like to do it justice and therefore I’ll split my review into a few parts. So far I’m intrigued to see what lands the children will visit and to see more of the characters whose names I’ve heard so many times.

This entry was posted in Book reviews and tagged Faraway Tree Series, The Enchanted Wood, The Faraway Tree. Bookmark the permalink.

6 Responses to The Enchanted Wood