If you like Blyton: Mischief at Midnight by Esme Kerr, part 3

Last time I left you with lots of questions, and hopefully now there will be some answers. But first, another question…

The protesters all have crazy names and Edie ends up at their encampment. Janet’s supposed to be there but isn’t, and only Edie’s worried.

Edie goes off in search of her and finds her chained by her neck to a tree, in a camp that’s clearly abandoned as she’s the only one there, right beside a raging and overflowing river. Well, that’s smart, isn’t it? Clearly there’s some point proving going on, actions not words, referring back to her argument about the Suffragettes but it’s all so idiotic. What’s worse is that Edie’s initially horrified but holds off on unlocking the chain long enough to interrogate about who release the ferrets. As if that’s important when one of both of you are about to be drowned by a burst dam!

She does get rescued and they rejoin the main protest in time to see Miss Fotheringay get arrested for assaulting a police officer. She’s not protesting, but she believes that Edie and Janet are in the midst of the protest and is insisting on getting to them. She seems an intelligent and shrewd woman throughout the book so I don’t find it that believable that she would lose her cool and hit a policeman in that situation.

MEANWHILE BACK AT KNIGHT’S HADDON…

Anastasia has trapped the ferret-man in the pet shed. An entirely baffling conversation ensues, but he does admit he’s Josie/Janet’s father.

Janet and Edie then return and get grilled about the events in the woods, and we get the rest of the story described by them rather than reading about it ‘live’.

Not that much happens, they just got driven back to school by another teacher. What’s more interesting is a sudden new story-line whereby Miss Fotheringay is in bother with the school board. Unfortunately all we get is that little bit of gossip (perhaps it will become important in the next book?) Also thrown in randomly is the school apprentice finding Janet’s father asleep in a ditch and taking a shine to him.

Most of the various plotlines get resolved neatly in the last chapter. Janet gets moved up to the third form to stop her getting bored, and that means Edie and Anastasia have each other to themselves (though Anastasia is more accepting of Janet anyway) a few teachers get told off for giving Edie a hard year, and the tower is saved as the developers have withdrawn their plans and the school manage to negotiate a five year lease for it.

WHAT DID I THINK?

I really liked this book at the start. It had a nice Blyton-ish boarding school with lots of promising plotlines.

However, it took me over a year to finish as it rather got bogged down with ferrets and protesters which isn’t at all where it started out. Lots of things seemed like important points, or clues almost, which weren’t mentioned again.

The main dramatic scene is rather ridiculous. Janet’s ‘clever’ enough to leave the key a distance away so that the police couldn’t easily unlock her but stupid to chain herself up by the neck, in the entirely wrong place. All of a sudden we have ‘it’s been raining for weeks’ and ‘the river is incredibly full’ and ‘there’s a bridge with might get washed away and a dam that  could burst’ which all seem like very convenient things to help along a dramatic chapter. Blyton did it far better when Mary-Lou falls over a cliff and is rescued by Daphne, in my opinion! The whole story is told from Edie’s point of view so we don’t really get to understand Janet or her actions which doesn’t help. And don’t get me started on Edie interrogating her over the ferrets when she’s supposed to be in a life-or-death situation.

The ending was a bit of a let down too, with everything neatly resolved in a brief narrative with no explanations given about how the tower was saved. Nor was there any resolution between Janet and her father, but again, that might be a plot for a later book.

I might still give the other books a go, especially as the first sounds like a good story. 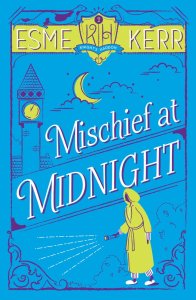 This entry was posted in Book reviews, Other Authors, Reading Recommendations and tagged Esme Kerr, If you like Blyton, Knight's Haddon, Mischief at Midnight. Bookmark the permalink.