This really is the blog idea that just keeps on giving. Every so often I browse the search terms that have led people to our blog and there’s always something interesting or amusing to see.

Here’s the best of the latest ones!

Book review on the Sixty Form at St Clare’s by Enid Blyton. That famous book when Pat and Isabel are in their senior years, and by that I mean they are in their sixties. Or maybe the sixtieth form – either way they’re probably grey haired and a bit harder of hearing by now. But still at St Clare’s! 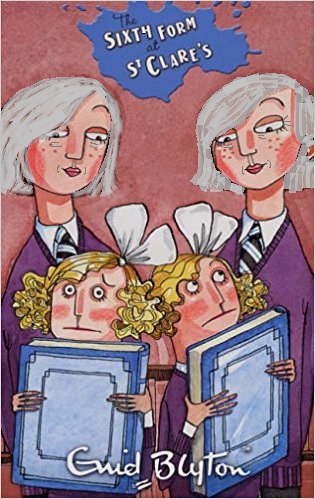 Enid Blyton karavan family book online read. This one’s perhaps about the Karavan family, Klare, Kelsea, Kraig and Konnor who go exploring kaves, kastles and korner shops. In a similar vein someone (perhaps the same someone?) wanted to know where is Karin Cottage from the Famous Five. That would be Karin Cottage in Karin Bay. Owned by Fanny and Quentin Karin. Naturally.

Sinipsis about Secret of the Moon Castle. ‘Sinipsis’ aside, this one’s pretty close!

Main characters of the book Mystery of a Missing Necklace.

The Twins at St Claires review. St Clare’s is often misspelt. But not as often as Malory Towers is!

YOU JUST MASHED THE KEYBOARD, DIDN’T YOU?

These ones are just completely baffling. Three strings of letters and numbers. Which definitely have never featured on our blog. If you Google them, google tells you that there are no matches. And yet someone googled these and landed on our blog… so in an attempt to lure these unsuspecting keyboard mashers to our blog they are now online, and so if they search again for them, they’ll definitely come here!

Rockingdown Mystery did Mr King have a beard? – the answer being, most likely, no. He is described as having a firm mouth in the text, and the illustrations show a clean-shaven man.

Updated Secret Seven any good?– I don’t actually know, but I suspect not. The Secret Seven are one of the few main series I haven’t examined in regards to updates.

What happened to Fatty from Five Find Outers? Good question. Did he become a police detective? Did he start a red-headed boys disguise agency? I don’t suppose we will ever know!

i m a well known enid blyton’s character .i m made of wood who i am ?? answer. This maybe isn’t a great question, grammar aside, but I would guess it’s Noddy.

What kind of dog was Timmy in the Famous Five?Well, in the text he’s described as a mongrel, and that it would be quite impossible to say what kind of dog he was supposed to be. I’ve seen a suggestion that he could be at least part Podengo Grande.

NODDY ALWAYS THROWS UP SOMETHING OF INTEREST

I suppose the moral of the Noddy series (not sure I’d call them novels) is to be good and honest, otherwise you’ll get your comeuppance. I’m not sure I have read any book where Noddy’s head grows, but there are a lot more books about him than the 15 original ones. And Noddy gets quite cross a few times in those, so I’d need more to go on there!

Someone always gets her name wrong!

Five Go Parenting Enid Bkytin. That’s not her name, and funnily she didn’t write that 60-something years after her death! 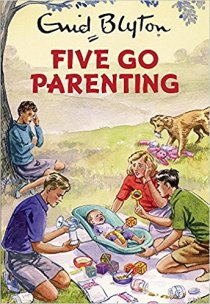 Above: How the book looks, how that person thinks it looks and how it should really look.

The Famous Five sparknotes – Sparknotes seem to be something life CliffsNotes – short summary guides to books, designed to help someone understand a book. I think they’re mostly used by students who didn’t read/finish an assigned book for school!

And of course there are a whole host of search terms containing the phrases read free online, pdf, synopsis, summary and guide.

I think need to stop putting ‘TV’ and ‘movie’ in sentences with Blyton books, I fear I am misleading many people, as we had a few searches for things that unfortunately don’t exist.

Yes I know there was an episode of the Secret Series in the 90s based on Spiggy Holes but frankly it was rubbish and I’ve managed to mostly scrub it from my memory.

I just want to add that I’m not intending to seem malicious in poking fun at these search terms or the people that used them. I’m aware that many may not have English as their first language, or they may be very young given Blyton’s target audience. I fall into neither of those categories and I’m forever using the Google feature “did you mean…?” when I search, mostly due to fat, clumsy typing fingers. I always click the correct version when Google offers it too… especially now I know that somewhere someone can see what I entered!