Every time I look at our search terms there is something interesting, strange, or just completely baffling. Here’s the latest collection! (As usual all capitals are mine, and this is done is gentle jest meaning no malice to whoever is unfortunate enough to have had their search(es) land here.)

Review of Secret of Lost of Necklace novel, that’s a lot of ofs. I wasn’t sure what book this referred to – it’s closest to The Adventure of the Secret Necklace, but it turns out that there’s an omnibus edition of that story plus Mischief at St Rollo’s and The Children of Kidillin. The title (with or without the extra of) makes no sense unless the first story is also renamed inside.

Famous Five on Kirron Island review. I’ve seen Karin Cottage, Kitten Island and Kirren Island (the official 70s annuals made the Kirren mistake, and the font made it look like Kitten, which some people then put into eBay listings etc), and my phone wants it to say Kieron when I type it but I’ve never seen Kirron until now. 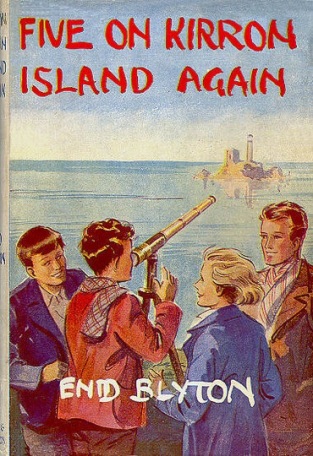 The Dreadful Children by Enid Blyton. I feel bad including this as it’s so close, but it’s just not right.

What is the average yearly mileage driven by an RSPCA inspector?I have absolutely no idea, and I have no idea why this would land anyone on this blog!

Change the end of the Noddy and His Car story. To what? And why? What’s wrong with the real ending? Or is this referring to the fact that golliwogs are changed to goblins even though it happens throughout?

How do Noddy keep himself neat and clean? and the similar yet more specific What steps do Noddy and Big Ears take to became beat and clean in Noddy in the Toyland? can surely only be answered with ‘they wash’? I mean there is running water and soap in Toyland.

How old are Uncle Quentin and Aunt Sally? Who is Aunt Sally? (There is one typo in Five Have Plenty of Fun where Aunt Fanny is called Aunt Sally [Sally being Berta’s poodle] but she’s called Fanny every other time). And to attempt to answer I would assume that they are in their early to mid thirties at the start of the Famous Five series, given that George is 11. I don’t imagine they had her in their teens certainly, but they could be as old as 40 in Five on a Treasure Island. It’s very hard to tell as they aren’t described in terms of age or lack thereof.

CLOSE BUT NOT QUITE

My dog found a mysterious necklace The Five Find-Outers and Dog found a missing necklace, and that sounds a bit like something that could happen in a Blyton book but as far as I know, it isn’t.

An exciting adventure with mountain drawings I suppose the Mountain of Adventure or The Secret Mountain would fit the bill, though there are only a few illustrations showing the mountains in full.

Not eat your story. No, well, I don’t think that books are all that tasty.

Amous Five style stationery and Famous 5 stationary both appear. I’m not sure who the Amous (Amorous?) Five are, but I know that the Famous Five wouldn’t have solved so many mysteries had they stayed stationary. 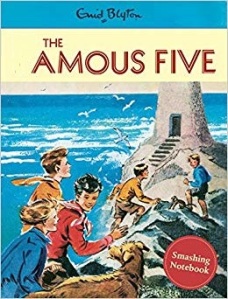 Well done Enid Blyton ending. Is that supposed to be about the ending of Well Done Secret Seven, or is it a congratulations for the ending of something else?

EVEN FATTY WOULD BE BAFFLED

The strings of incomprehensible nonsense have continued: dhn7hirgef5bxbat1jpotfccea7y3yggz1zyeufzenyvowoqn… etc, and afcrcxew_6ksw4w47yud0arf7eajwrpz5wph1p4dhcbrkfg0hokextwrnnsqcqzqos-zww…etc plus several more.

Corrector of Five on a Treasure Island any one corrector, who or what is a corrector?

Caillou taught my child terrible behavior, well Caillou is a TV programme for children and many people do say that his tantrums and bad behaviour are negatively influencing their children, but how that links to our blog I do not know.

DO YOUR OWN HOMEWORK

In the Adventures Series of Enid Blyton, Dinah, why did you like this character of favourite and what is the best thing you like about this character. Why I like Dinah is irrelevant, it should be about why YOU like her.

Four words to describe the character Saucepan Man in Magic Faraway Tree. He isn’t a cheater.

Why I liked book Enchanted Wood. We’re not psychic, we don’t know why you liked (or didn’t like) it!

The summary of Enid Blition’s, the name is wrong not to mention that the request isn’t finished!

Poems of Enith Blyron kids, both names are wrong here!

THE RARE SENSIBLE AND INTERESTING ONES

Enid Blyton’s Fatty gets a 21st-century makeover. I’m always interested in moving characters into different times, especially seeing how 1940s/50s characters would work in the modern day. Bill Cunningham would have a mobile phone instead of a wireless to keep in touch with his work, and the Famous Five could Google map their route for their Hike to Two Trees and Gloomy Water. What would Fatty be like in the present day? Well I think he would be fairly similar, though better equipped, ordering disguises and things from Amazon Prime. He would take photographs on his smart phone of things like footprints and there would probably not be a single local bobby in a police house in Peterswood.

Famous Five books from best to worst – I can help you with that, or my opinion on that anyway.

Where is Kirrin Village located? We never know, really. On the coast somewhere in the south of England, of which my geographical knowledge is sorely lacking.

And that’s all, until next time!