There are many sorts of homes in Blyton’s books. Many of them are perfectly average (for the times they were set) rural or village cottages, farms, suburban houses, boarding schools and so on. There are also the slightly more unusual – caravans, narrow-boats – and the very unusual such as castles, palaces and the insides of mountains. And then there are the places that in ordinary view would never be classed as a home, and yet are turned into wonderfully comfortable places to live when the need arises.

There are also lots of temporary lodgings and camp-sites such as the cellar below Two Trees (Five on a Hike Together), the rooms in various farm-houses, bed and breakfast type establishments and relative’s homes and tents galore, but I want to look at the semi-permanent cosy little homes created out of what would not normally be considered a reasonable place to live.

Caves often come in handy in Blyton books – they are the perfect place for a secret smuggling tunnel (The Secret of Spiggy Holes, Smuggler Ben, The Island of Adventure, Five Go Down to the Sea to name but a few), storing stolen goods (Five Go Off in a Caravan) and they can be a good place to hang out, or explore (Secret Seven Win Through, Five Go to Demon’s Rocks). They’re not really designed for living in (not these days anyway), yet a few groups of Blyton children make some remarkably comfortable homes in caves…

As the title suggests, in the third Famous Five book they run away – from the Sticks at Kirrin Cottage but it’s not the whys we are looking out, it’s the wheres.

Well, of course they head to Kirrin Island, but then they have to find somewhere to live for however long it takes Aunt Fanny to get out of the hospital. They consider and veto the dungeons (too cold and dark), the only room in the ruined castle (but the roof has now fallen in) and even the old wreck (too rotten, dark, slimy and smelly) and they are stumped for a bit. George is adamant there is nowhere else, she knows every inch of the island, and yet, they then spot a dark hole in the cliff behind the wreck that looks suspiciously like a cave.

And a cave it is! So secret, even George had never set foot in it before. It has all the mod-cons for a cave – a soft sandy floor, a rocky ledge which makes a good shelf for their cans and things and a hole in the roof which is part skylight, part chimney and part doorway. It lets in light and fresh air, it lets smoke from the fire escape and with a rope tied to a gorse bush it provides a quicker way in and out than clambering over the slippery rocks and low tide. Best of all – nobody is ever going to spot it!

The Valley of Adventure

There are two cave-homes in this book. The first we see is the smaller of the two, known as Fern Cave. Fern cave is cool and mossy, located near the waterfall which provides the children with fresh drinking water. The large overhanging fern at the entrance keeps out the noise of the waterfall, and the misty spray as well as hiding them from view. The floor is softly mossy and there’s a handy rocky shelf just like in the Kirrin Island cave.

It doesn’t have a skylight, but it does have some other nifty features. At the back is a narrow tunnel which leads to the Cave of Echoes, and then on to a ledge behind the waterfall. It also leads to the other cave(s), but that’s discovered from the other end much later.

The other cave(s) are inhabited by glowing stalagmites and stalactites, statues wearing fine jewellery, old paintings, old books and maps, fine golden treasures and then finally a little old couple and Martha the hen.

This set of caves is well hidden, with the entrance a hole halfway up a rocky wall. There are doors between some of the caves, the first being an enormous studded thing, and the last being the little door which leads to the old couple’s kitchen. They have a whole little house in the caves, and they never leave but when it is fine weather they can go out another hole onto a large, sunny ledge.

The old couple’s cave is certainly the best furnished of all the cave-homes as it has a proper bed and a kitchen table and so on, so it is probably the homeliest if a bit oppressive being stuck inside so much! 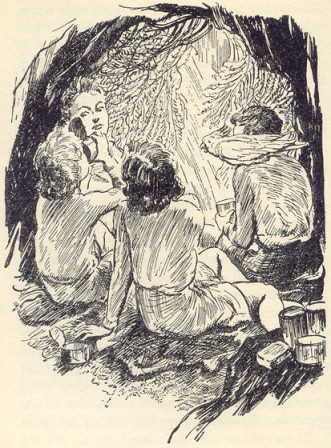 Inside the fern cave 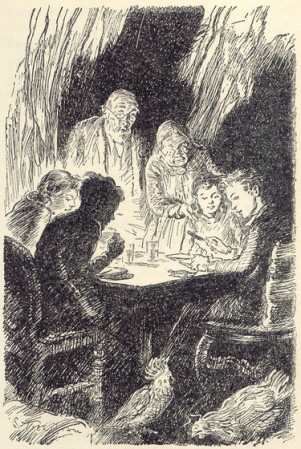 The Arnold children and Jack have a few places to live on their secret island, but when winter comes it is the caves they turn to.

The first cave is a larger, open one which becomes the sitting room and bedroom, with a cheerful warming fire at the entrance. Then the little cave at the back, accessed through a narrow passage is the store-room and hiding-place should anyone come to the island. They make it comfortable by hanging a lantern from the roof and rigging up some wooden shelves for their books and games. Jack fashions wooden stools from bits of tree trunk and a wooden table too, while Peggy sews together rabbit skins to make a blanket they take turns having on their beds of bracken. They even bring up fine sand from the beach to spread on the floor.

Trees are mentioned in a few books as fun things to climb (Those Dreadful Children), useful for getting in windows (The Secret Room, The Secret of Cliff Castle) and as places to build a tree-house (Well Done Secret Seven). Some Blyton characters even live in trees.

In addition to the caves, the children make their very own house out of some willow trees. They bend the trees over so they meet as a roof, then they plant cut pieces of willow into the ground for the walls. They stuff heather and bracken in the gaps to keep it weather-proof and even hang a door and make a partition wall in the middle. The best part of Willow House is that planted willow branches start growing again so the walls all sprout leaves! 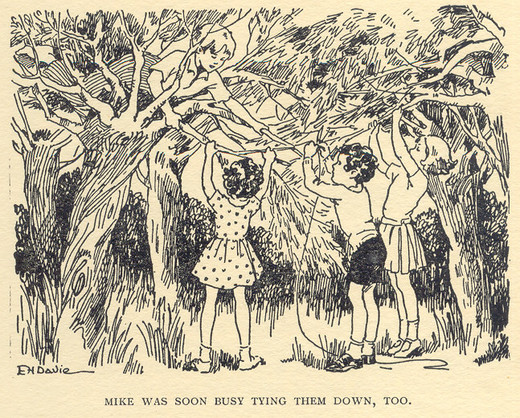 When Susan, Peter and Amanda found a huge and hollow tree in the middle of some woods, they visited it a lot to play as it was great to climb up into the branches and hide, pretending it was a ship etc. When Susan and Peter run away, though, they turn it into a little house. There’s a ridge in the trunk inside that forms a natural shelf for their clock and other small belongings, and it’s quite dry and warm inside. It gets a bit stuffy sometimes so they cut a hole in the most rotten part of the trunk to form a window, draping it with a curtain of leaves and moss.

Many people (none of them human, as far as I know!) live in the Faraway Tree. The Angry Pixie has a little house, as do Dame Washalot, Silky and Moonface to name a few. Moonface’s is one we see the most of, and is a round little house with the usual home comforts, and also a door leading to a slippery-slip which is a slide taking you right to the bottom of the tree very quickly. The children also visit Silky’s home quite often for google buns and pop biscuits. 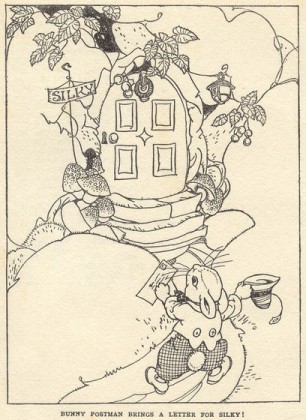 Josie (a doll), Click (a clockwork mouse) and Bun (a rabbit) live inside a tree too. It is a hollow oak tree in which they discover a door with a knocker which leads to a little hall.It has a round kitchen with a little window, and some tiny stairs leading to a round bedroom with another little window. They furnish it with furniture bought at a goblins’ market and Josie sews up curtains and bedding.

The six bad-boys of The Six Bad Boys initially use an old cellar as a meeting-place, and end up spending a lot of time there – escaping various unpleasant homes. Bob even ends up living there for a time when his mother goes away. Usually it is girls who spend time prettifying their surroundings in Blyton’s books but the boys do what they can to make it homely. They bring in candles and an oil-stove, and at Christmas there are decorations and food. 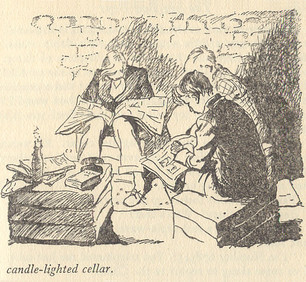 This entry was posted in Locations and tagged Caves, Five Run Away Together, Hollow Tree House, Josie Click and Bun, The Enchanted Wood, The Faraway Tree, The Little Tree-House, The Secret Island, The Six Bad Boys, The Valley of Adventure, Tree Houses. Bookmark the permalink.