Noddy and the Case of the Toyland Mischief Maker

A while back I watched an episode of this show Noddy and the Case of the Broken Crystal Memory Game and wrote a bit about the series in general. Then this week I happened to be browsing the children’s channels to find something for Brodie and Noddy happened to be on. So naturally I chose that, and we watched it. I thought I might as well review it too!

When Big Ears’ teapot goes missing, Noddy is surprised to find it hanging from a lamppost. And when Bumpy’s kennel goes missing too, it’s clear there’s a mischief-maker in Toyland. Noddy needs to investigate before Toyland descends into chaos.

This is episode 29 of the series but I don’t think I will have missed too many important plot points in skipping 27 episodes.

As Channel 5’s episode description says the episode starts with Big Ear’s losing his teapot. He and Noddy are baffled, and briefly distracted by some very annoyingly voiced unicorns (my little pony-like creatures) who want to play a game with them. 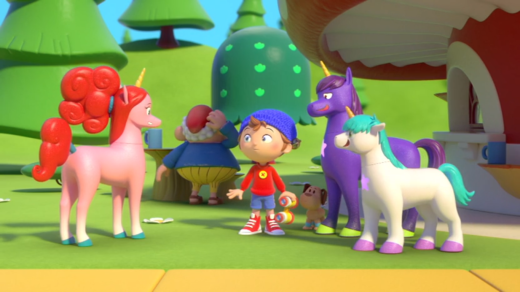 They decline and Noddy breaks out his binoculars and spots the teapot at the top of a lamppost. Big Ears in the books is a sensible and mature voice of reason against Noddy’s silly youthfulness so it’s jarring to hear him say ‘Huh, I don’t remember putting it there.” Of course you didn’t put your own teapot on the top of a lamppost and then forget about it!

They then notice that Bumpy Dog’s kennel has been moved on top of a playground roundabout.

They ponder who could have put the hat on the lamppost; someone very tall, or perhaps very good at climbing. Noddy uses his tablet to examine and rule out a few possibilities before landing on the ninjas. 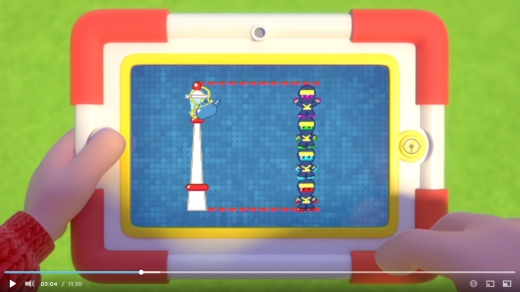 Yes, the nostalgic world of Toyland is now home to some ninjas. The ninjas, being ninjas, hear they are being talked about and turn up to deny they are the guilty party and retrieve the teapot and kennel.

Noddy then spots a builder’s hard hat on another lamppost and decides they are the next suspect. After that, his next suspect is Deltoid as his bike pedal is found beside the builder’s site, and a wall which has had bricks removed to form a smiley face.

Just like the ninjas and builders, Deltoid denies being the mischief maker.

Honking horns draw Noddy’s attention outside where the mother of all traffic jams has formed with hundreds of identical vehicles (apart from his own car and one driven by a cat). The mischief maker has ramped up his or her reign of terror. Dun dun dun. 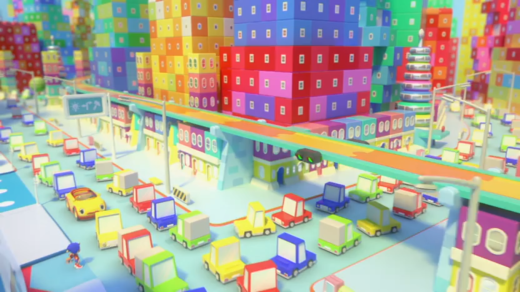 The traffic lights have been covered by some sticky putty, sticky putty with hoof prints in it. Can you solve the mystery?

Noddy can – and actually he solves it when the Clockwork Mouse says Who would dare do such a thing? and Noddy remembers the unicorns saying something about a dare game earlier. But he still examines the putty with his magnifying glass and takes a photograph with his tablet, which analyses the shape of the print and matches it to the unicorns.

The unicorns have been playing The Dare Game. They are surprised and dismayed that they’ve upset anyone. Noddy ‘solves’ the problem by inviting everyone to join in the dare game with more sensible dares.

It turns out the unicorns are called Naughticorns which pretty much seals their fate as trouble makers! If I’d known their proper name (and had seen the first minute of the episode) I would probably have identified them as the mischief makers right away.

At least Brodie seemed to enjoy it!

Brodie sat and more or less watched the whole episode, unfortunately he wasn’t able to offer a better review than boof. If he had, it would probably have been along the lines of it had lots of bright colours and interesting sounds so I liked it.

Mummy, however, is a lot fussier.

I knew what to expect having seen an episode already, but I still get disappointed by the smooth, shiny computer animated nature of everything, and the inane stupidity of all the characters. I know it’s aimed at very young kids but there are programmes who manage not to infuriate me – Hey Duggee and Ben and Holly’s Little Kingdom for example.

Some parts of Toyland look good (I like Deltoid’s house in the first episode) and in this one we see ‘downtown’ Toyland with lots of building block buildings. However the cars are completely uninspiring and don’t even look like toys, they look like cheap computer animated cars.

Big Ears at least still has a toadstool house, but it’s not a real toadstool anymore. 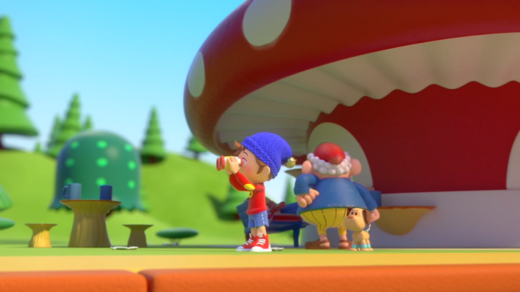 The general story-line was fine, though, with a reasonable series of suspects each getting ruled out.

I think I will have to learn to love it if Brodie is going to like it – I’m keen to foster a love of Enid Blyton in him, even if that means watching lots of Noddy: Toyland Detective.

This entry was posted in Blyton on TV and tagged Noddy, Noddy Toyland Detective, The Case of the Toyland Mischief Maker. Bookmark the permalink.