If you like Blyton: The Lone Pine Series by Malcolm Saville

I will start with an honest admission – I didn’t like this series the first time I tried it. I had heard that Malcolm Saville was like Enid Blyton and if I like the Famous Five etc then I would like the Lone Pine books. I dutifully borrowed the first one from the library and I gave up after about one chapter. I gave up so early that I didn’t even recall the start of the book when I came to try again as an adult. 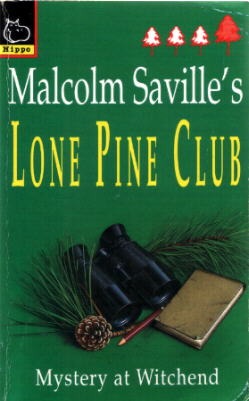 I feel it’s important for me to stress that as an adult I very much like them, and if I had given them a proper chance as a child I probably would have ended up devouring the series. (Side note: I didn’t like Harry Potter when it first came out. I read the first chapter or so of the second book and abandoned it again quickly. Then years later I saw the first films, read the whole series and now I’ve read them dozens of times. I was a harsh and hard to please reader sometimes!)

I’ve only read sixteen of the Lone Pine books so far, as I had trouble getting the 17th for a long time.

There are 20 Lone Pine books in total, as well as one hard-to-get-hold-of short story (The Flower-Show Hat (1950).

The books feature a group of children who have formed a club called the Lone Pine Club – named for the solitary pine tree which guards their den/club house in Shropshire.

Interestingly (to me anyway) Saville clearly liked to vary his titles – he didn’t use the same format or even include Lone Pine in more than a couple of titles.

There are nine human members of the Lone Pine Club plus the obligatory dog. However, it is rare for all nine members to appear in the same story (this only happens in the final book, in fact). This is mostly because they don’t all live in the same place(s) and so some adventures only involve local members.

The core of the club, and in every book, are David Morton (the Captain) and David’s younger twin siblings, Dickie and Mary plus Mackie, (short for Macbeth) the Mortons’ Scottish Terrier.

David and the twins move to Witchend – a house in the Shropshire hills – as evacuees from the Second World War in Mystery at Witchend. They meet Peter, who lives with her father on the Long Mynd where her father is in charge of the reservoir. The other founding member is Tom Ingles from the Ingles Farm down the lane from Witchend. Peter and Tom feature in most of the Shropshire-based stories but don’t often travel to the other locations.

Jenny Harman first appears in the second book, she lives near Peter’s aunt and uncle by the Stiperstones (not too far from the Mynd).

Cousins Jonathan and Penny Warrender join in the third book, when the Mortons visit Rye.

Harriet Sparrow is the last member to join, in the tenth book, when Jonathan meets her in London.

Several of the books are set in Shropshire, many featuring the Long Mynd and the Stiperstones (Mystery at Witchend, Seven White Gates, The Secret of Grey Walls, Lone Pine Five, The Neglected Mountain, Wings Over Witchend, The Secret of the Gorge, Not Scarlet But Gold, The Man With Three Fingers, Strangers at Witchend and Home to Witchend) as that is where the Mortons, Peter, Tom and Jenny live.

They also visit Sussex several times, in particular Rye (The Gay Dolphin Adventure and Rye Royal), and the Romney Marshes (The Elusive Grasshopper and Treasure at Amorys).

Blyton used some real places in her books, others were very loosely based on real places and most were just made up, but I think all of Lone Pine Locations are real (bar individuals’ homes/farms etc). Saville really brings his locations to life with rich (and accurate) descriptions of each place, and many of them can be visited today and immediately recognised.

The best part (in my humble opinion) is that each book has a map of where the story is set, highlighting all the important landmarks and locations.

There are a lot of familiar ideas between Blyton and Saville. Both authors’ books have a group or groups of children who camp out, solve mysteries and catch criminals. They are both of the same period (at least the start of the Lone Pine books are contemporaneous to Blyton’s works, but Saville continued writing into the 1970s) where boys take care of girls and children can run rather wild without parental influence.

The Lone Piners as a group are like a mixture of the Famous Five, The Adventure Series lot, the Five Find-Outers and the Secret Seven. They are an organised club with rules, passwords etc like the Secret Seven, and they often ‘formally’ investigate mysteries like the Five Find-Outers. Yet they also accidentally fall into adventures while camping, holidaying and travelling like the Famous Five or Adventure Series children do.

Saying that, they are not so similar that you would confuse one for the other. Blyton’s writing and Saville’s are somewhat different. Blyton, in my mind, is a more straight-forward writer. She generally writes what she means and her characters are similarly straight-forward. She does of course feature secrets, liars and plot twists but for the main part people come out and say what they mean and say it clearly. Saville prefers to make allusions, uses more metaphors and his characters do more ‘beating around the bush’. I find that a bit frustrating sometimes, actually, that instead of just saying something, a Saville character will keep quiet and we will waste time going in the wrong direction until they decide to speak up.

As I’ve said above the Lone Pine books don’t feature the same characters each time, unlike Blyton’s major mystery/adventure series which have the same line up each time. Saville’s children also grow up more obviously. The Famous Five do age, but not greatly. They mature a little, it is mentioned they are older and more responsible. The Lone Piners go through more development as they age – for example they begin romantic entanglements (David and Peter, Tom and Jenny in particular) and tire of their rural home life and long for a more cosmopolitan existence (Tom). Saville also moves with the times – his 1940s books are set in the 40s, and his 1960s books definitely have a nod to 60s vehicles, fashion and ways of life. It’s quite bizarre actually, as the Lone Piners are perhaps one year older but life has moved on by a decade!

Both Blyton’s children and Saville’s age a lot less than they should, the Famous Five age a few years over 21 adventures / 20 years, and the Lone Piners age around the same over 20 adventures / 35 years.

So there you have it. I would have liked to go into more details about the plots of each book but a) that would have made this post far too long and b) it’s been ages since I read them and I wouldn’t be able to do them justice. I will need to re-read them some day and perhaps review them too.

Let me know if you are a Malcolm Saville fan too!

This entry was posted in Reading Recommendations and tagged David Morton, If you like Blyton, Malcolm Saville, Shropshire, The Lone Pine Series. Bookmark the permalink.

10 Responses to If you like Blyton: The Lone Pine Series by Malcolm Saville