Allegra McEvedy is a Blyton fan. I hate reading that when about to read or watch a work based on Blyton’s books. I hate it because it always gives me hope that this one will be good, and inevitably it just increases my disappointment. But anyway, Allegra McEvedy loved the Famous Five and Secret Seven but her favourite was the Naughtiest Girl.

As is the case with many non-fiction books this one has a contents list. I always read this to give me an idea of what’s to come, to whet the appetite. But often, like today, it just leaves me with a lot of questions…

When did any Blyton character ever eat fluffy puffy cheesy pillows or triply cheesy straws? Do you remember garlic mushrooms or rainbow veggie skewers? When did they drink fruity smoothies? What version of The Secret Island has them eating strawberry, mint and spinach salad? What on earth is a sticky piglet?

I think most of the answers will be along the lines of nothing even remotely resembling those dishes ever appeared in a Blyton book.

I was expecting this as any Blyton fan I know who has perused this has said it was nice but half of it wasn’t very Blytonian. I suppose they wanted a certain length of book and had to pad it out but surely they could have found some less anomalous dishes?

There are some genuinely Blyton sounding recipes amongst the strange ones, though. No Blyton cookbook would be complete without a recipe for ginger beer, jam tarts, google buns and pop-cakes and this one has all those. It also has ones for lemonade, gingerbread, soft-boiled (or indeed ‘dippy’) eggs, macaroons, porridge and cherry loaf; all suitable Blyton-fare. I can also understand the drop scones, scrambled eggs (without the aforementioned garlic mushrooms!), bloomer loaf (you’ve got to have something to make your sandwiches out of after all), meringues, quiches and peppermint creams.

Not so much the kedgeree, melon boats and honey-onion sausage rolls!

Having read through the recipes I’ve noticed a lot of ingredients that I suspect wouldn’t have been used in Blyton’s writing heyday. I’ve had to research some of them though, as it’s hard to always know what’s accurate. Blyton wrote a lot of her books in the days of rationing, so much of the food featured in her books were either unavailable or in short supply such as sugar, cheese, meats, sweets and so on. Foods like bananas were available before the war, and again after yet they rarely appear in her books (for example they only appear once in the Famous Five books as the favourite food of Charlie the Chimp in Five Are Together Again) so it’s hard to tell based just on her books what was actually available and what she included because she was familiar with it. She included lots of delicious things as she knew what her readers would be longing for, so perhaps anything too exotic wouldn’t have elicited the same response from them. Many children would have been too young to remember or know what bananas were.

Correct me if I’m wrong but I suspect the below examples are unlikely to have been commonly available in 1940s and 50s Britain:

The ‘fluffly puffy cheesy pillows’ turn out to be potato things, not pastry as I initially thought.

The mackerel pate recipe makes enough for ‘a small bowlful, enough for a round of sarnies each for the Famous Five, and Timmy can lick the bowl.’ Since when did any of the Five eat one round of sandwiches on a picnic?

Sticky piglets turn out to be cocktail sausages with a 1/4 date and 1/2 a slice of streaky bacon wrapped around them. Yuck!

I wanted to love this book. I don’t.

It has some good bits. The best bit is the Faraway Tree recipes. I (and I’m sure lots of others) would love to make google buns and pop cakes (though the books have pop biscuits in actual fact – thank you to Ilsa for reminding me of this).

The google buns are little scone-like things (I’m no baking expert!) while the pop cakes have a honey and white chocolate filling.

The toffee is also a fitting inclusion and makes sense compared to a lot of the other recipes. I won’t be trying to make it though as MOLTEN TOFFEE IS AS HOT AS LAVA AND VERY DANGEROUS!

I also liked the fact that the gingerbread recipe is to make a gingerbread shed for the Secret Seven. That nicely ties together a common foodstuff and a Blytonian icon.

There are actually six sections to the book, each with recipes that are supposed to be themed to the series. As above the Faraway Tree section is quite good. The other are for The Naughtiest Girl (breakfast foods), The Secret Seven (elevenses), The Famous Five (picnics), The Secret Island (suppers) and Malory Towers (midnight feasts). Each has a few recipes that to me fit in with a Blyton theme, but also several (examples at the top of this post) that don’t fit with the specific series let alone her greater works.

There is a short extract from each series at the start of each section, each focusing on a foody moment. It would have been nice, though, to also have a brief quote or reference to when a recipe was or might have been eaten by Blyton’s characters.

Instead the bulk of the recipes don’t mention Blyton, her books or her characters. They could be any old recipes. For example the midnight feasts at Malory Towers has some things that would have been impossible for them to eat. While muffins and biscuits would have appeared in their tuck boxes they would not have been oven-cooking sticky piglets or chopping melon to make melon boats.

Illustrations are similarly awkward. If you look closely the Naughtiest Girl recipes have children in school uniforms (but Mark Beech’s ragged looking illustrations make them look like urchins rather than boarding school kids), and the Malory Towers girls are in similarly ragged pyjamas. The Secret Seven shed appears on one recipe, and some children who may be the Famous Five are there too (though only properly recognisable when all together), and a fairy that’s probably Silky is featured as well. A lot of pages have random kids bouncing and climbing over photos of the food, though. 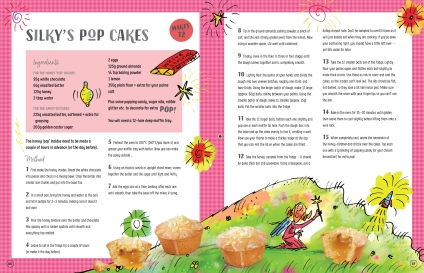 So in short; nice idea, poor execution. Not enough Blytonian recipes and not enough links between the recipes and her influence and inspiration.

If I ever try the Faraway Tree recipes, I’ll let you know.

This entry was posted in Book reviews, Food and recipes and tagged Allegra McEvedy, Jolly Good Food. Bookmark the permalink.