Five Run Away Together, part 2

Part one of my review can be found here.

The Mystery of the Black Trunk

While on the wreck they find a curious thing – a little black trunk, well locked. They guess it has something to do with smugglers, and are ready to investigate. There are other signs that someone has been on George’s precious island – rocks have been piled over the dungeon entrance and a fire has been lit. Someone visits the wreck in the night and the locker then contains tins, crockery and blankets. Very strange things to smuggle! When they get their hands on the trunk later, it contains girls’ clothing and some teddies and dolls.

The Five Vs The Sticks

Next the Sticks appear on the island bringing with them half the contents of Kirrin Cottage, so they clearly haven’t come looking for the Five.

Now begins a funny few chapters, almost farce-like in tone. The Five know the Sticks are there, but the Sticks don’t know about the Five.

The children sneak into the dungeons and terrify the Sticks with animal noises (who knew George made such a good horse?). They Sticks hunt around the island but find no-one, not even the boat. While Ma and Pa are on the wreck the Five scare off Edgar with cow noises and by throwing clumps of earth, then gather up all the things stolen from the cottage and take them to the cave.

Edgar foolishly embellishes this story to include hundreds of cows with antlers like reindeer, all a-mooing and throwing clods of earth at him. The Sticks go hunting for the Five again and Edgar finds them entirely accidentally by falling through their cave skylight, and becomes their hostage. 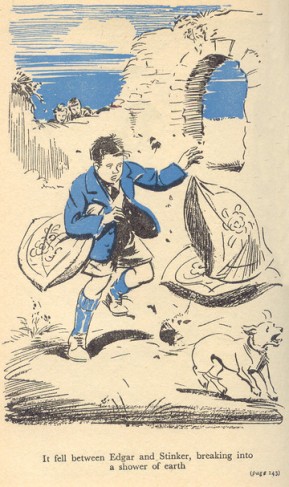 The solving of the mystery

It’s Anne that puts two and two (a girl’s scream in the night and the contents of the trunk) together and comes up with what the Sticks have done.

Ma Stick is terrible worried about her little lamb Edgar so she and Pa Stick row off to Kirrin to look for him. This gives the Five time to head into the dungeons to rescue Jennifer, the red-haired kidnap victim (I don’t think I’ve ever noticed that detail before actually) and swap her for Edgar.

I actually feel sorry for Edgar here. Yes he’s irritating, badly behaved and foolish but he’s not had much of a chance thanks to his parents. From what we can gather he knows very little about what his parents have been doing and certainly hasn’t taken any part in the kidnapping.

They take Jennifer to the police, of course, and run into Quentin. He’s come back as nobody answered the phone at Kirrin Cottage and has found it ransacked and empty.

The policeman is shocked silly when the child the whole country has been looking for just wanders in casually, and is even more amazed that the children say they can provide them with the kidnappers too. This is done by Julian telling Pa Stick where to find Edgar when he sees the man skulking around Kirrin Cottage. It’s just a matter of the police following them over to the island and arresting them.

My usual nitpicks, questions and observations

The first time Timmy enters the cave he jumps down into it and George is worried he might hurt himself. There’s no further mention of him entering the cave and not a single mention of how he gets from the cave back up onto the cliff!

Also, George does a piercing whistle that Timmy ‘always obeys’ to call him back from Tinker on the island – why doesn’t she do this when they’re fighting in the garden instead of jumping in and gabbing them with her bare hands?

Sticking with Timmy, we start the book with Timothy then he is Tim, and then Timmy for a while, back to Timothy then it chops and changes. As I noted he was Timothy for the entire first book. It’s both the children and Blyton as the narrator who use all three names. Not that it’s a mistake or anything – just interesting to see the change as I believe he is more or less exclusively Timmy later on.

Continuity detail-wise; we have Alf the fisherboy (not yet renamed James), Joanna is still Joanna and not Joan. The only whole room in Kirrin Castle has fallen in (it will reappear whole-ish in Five On Kirrin Island Again, I believe). The draping the boat with seaweed will appear again in Five Fall Into Adventure (and is also used in The Adventurous Four).

George mentions Kirrin getting snowed in – explaining why Aunt Fanny has a cupboard full of tins and says it has happened once or twice, you know. Yes, of course they know. It happened at Christmas when they were there!

Interestingly Julian, Dick and Anne were also at Kirrin for Easter, so presumably have barely seen their parents in a year! I always find that strange. Fair enough if there’s a 6 or 8 week summer holiday a week or so out of that isn’t much but to be away more or less every holiday when they don’t see them at all during term time?

What’s more shocking is Jennifer’s parents. They’ve been besides themselves since their daughter was kidnapped and yet let her stay the night at Kirrin Cottage while they stay in a hotel, and then they let her spend a few days and nights on Kirrin Island with the other children. Your daughter has literally just been saved from kidnappers and you instantly let her spend time away from you, with some children you’ve never met before!?

Meanwhile Uncle Quentin shows his more human side. He’s terribly worried about his wife, showing loves her a great deal. He tries to make a few jokes at the dinner table as he actually notices the children are looking a bit glum and doesn’t like to see that. He also worries enough about the children to phone them daily to keep them updated, and to return home when nobody answers the phone (more on that in a moment). In order not to worry George unduly, he keeps information from her. He says a few times that they won’t know anything about George’s mother’s prognosis for a day or two, and then later tells George her mother has had an operation. I suspect he knew all along that there would be an operation but didn’t want George worrying about it.

I do wonder where Quentin is most of the time, though. Hospitals in those days were even more restrictive in visiting than they are now. He might have been allowed an hour in the afternoon or evening, maybe both if he was lucky. Was he sitting in a waiting room 24/7 for several days?

So, back to the phone calls. There’s a flaw in the children’s plans, there. They are on the island, but want the Sticks to believe they have gone to Julian’s house. Surely if Quentin called and spoke to Mrs Stick, she would relay that information, and he would call his brother’s house to either inform George of the latest, or more likely, rage at her for disobeying orders. He would then find out that they weren’t there and get worried.

What else? Oh yes. George is supposedly the only one who can land on her island, and there’s only one landing spot. But the Sticks row up and land elsewhere without bother. (I know Pa Stick is a sailor, but still.)

I know I’ve gone on for ages now but bear with me, we’re almost there. There’s a typo in this copy – his clear boice when it’s meant to be voice. At one point ‘teens is used, what’s the apostrophe for? I’m familiar with ‘phone etc with the apostrophe signifying omitted letters but teens isn’t short for anything, surely?

Also the illustration on page 160 (of Jennifer being rescued from the dungeons) is a bit of a spoiler considering that doesn’t happen until page 171. Unfortunately my copy turns out to be missing a couple of pages, including the illustration of George slapping Edgar.

Finally, I noticed in this book particularly how weird some of their meals are. I know they ran away with what they could gather but still. One is  cold ham, bread, pickles and marmalade. Surely not together? Not even Dick would eat that. Another is tongue, tinned peaches, bread and butter golden syrup and ginger beer, and also tinned salmon, peaches, milk, bread and butter and cocoa.

One last point about the Sticks

The Sticks are absolutely godawful. As above, Edgar can’t entirely help it so I’ll let him off the hook. As Blyton says, perhaps he will stand a chance if he is kept away from them and set a good example instead of a bad one.

Mr and Mrs Stick are happy to kidnap a small girl, much younger than Edgar, and lock her in a dungeon. They probably mean her no real harm, and would return her once a ransom is paid but it’s still an abhorrent thing to do for money. The worst part is that they just can’t see how awful they are and how hypocritical they are. Mrs Stick is fearful and Mr Stick angry when Edgar goes missing – knowing fine well they’ve got a kidnapped child in their dubious care.

And when they find Edgar in the exact dungeon room Jennifer had been in:

“Who put you here?” demanded Mrs Stick. “You tell your Pa and he’ll knock their heads off, won’t you Pa? Putting a poor frightened child into a dark cave like this. It’s a wicked thing to do!”

She is so spectacularly unaware of her hypocrisy there. As the policeman tells her, Edgar knew he wouldn’t come to any harm, he just had to wait for his parents to come back.

I despise people like this. The ones who can’t see past their own lives to see what effect they are having on others. People that allow their children to bully others/steal their possessions/throw rocks at buses, but would be violent in their anger should anyone say so much as a bad word about their precious child. 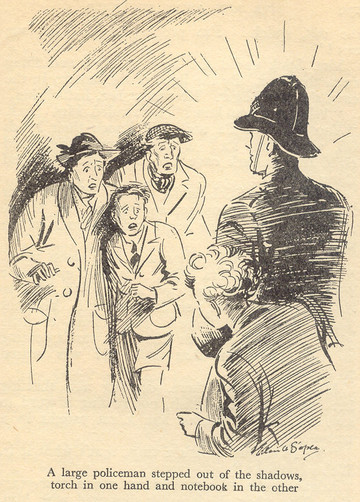 I have made a lot of criticisms but honestly I do like this book! It’s my seventh favourite, in fact. The Sticks are marvellously bad villains. Although they are rather stupid at times they are also sinister in how they take over Kirrin Cottage and leave the Five almost prisoners in their own home. Any time spent on Kirrin Island is good time, in my opinion, and there’s plenty of that here.

We also have another review of Five Run Away Together

This entry was posted in Book reviews and tagged Edgar Stick, Five Run Away Together, The Famous Five. Bookmark the permalink.

1 Response to Five Run Away Together, part 2