Noddy and the Case of the Hiding Pirates

Noddy and the Case of the Hiding Pirates is a soft cover children’s book, based on the latest TV series. It was published by Hodder in 2017, and is the second Noddy tie-in book for that series, though it is based on episode #3 of the series. I haven’t watched that episode, but when I spotted the book in the children’s department of my library I ended up grabbing it. I actually put it on Brodie’s card, but I’m not sure he will be interested. His favourite books are mostly lift-the-flap or touchy-feely ones except for Hairy Maclary and Each Peach Pear Plum.

It’s a short book, but very attractive and brightly coloured. The characters and scenery actually look better in the book than in the show, perhaps because they aren’t moving you can see them better and they actually look a more like real objects rather than computer graphics. 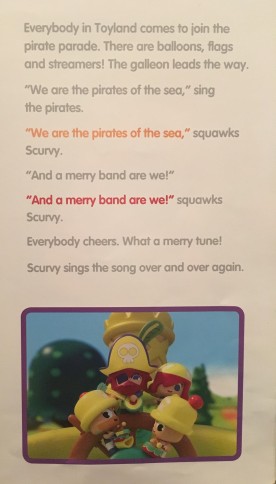 The text is short and punchy, and there are a variety of page layouts. Some pages are entirely an image, other are a mix of text on white with inset images, and there are a couple of text on image pages too. Some of the words and phrases are in colour to add even more interest. The strange thing is that it’s told in first person from Noddy’s point of view. The TV series centres on him, but as there’s no ‘he said/she said’ as you would get in a book it’s then a surprise to read Noddy saying I did and I will etc. Especially if you’re used to reading the original Noddy books where Enid Blyton’s ‘voice’ is the narrative.

It’s a simple but effective story. There is to be a pirate parade, but the pirates are missing. As Toyland’s detective it’s up to Noddy to find them. With the help (and sometimes hindrance) of Scurvy, the pirates parrot, Noddy and Deltoid go searching. On the pirates’ ship they find and empty music case and a map of the DareDale caves. In the caves they hear faint singing, but Scurvy is so loud they can’t work out where it’s coming from. Deltoid takes Scurvy away and Noddy find the pirates who apologise – they just needed somewhere quiet to practice away from Scurvy. They have got their song down now, and so the parade goes ahead.

However there’s one further problem Noddy has to solve – the pirates have rather tired out their voices with all the practicing. Noddy has them sing the song one time, and then Scurvy makes himself useful and repeats it over and over for the parade.

Well, I had to see how they compared didn’t I? I looked for the episode on Channel 5’s catch up but they are on to series 2 now and so it doesn’t go back as far as episode 3. Luckily it’s still on Netflix (even if that does mean listening to the American voice acting).

I have to say that the book is pretty similar to the TV episode. Some of the dialogue is cut and some of it is simplified. For example instead of Deltoid saying I, Deltoid, am determined to aid in their discovery, he says I am determined to help. I assume this is because the book is aimed at young children, and while they can watch an 11 minute show and follow it, they might struggle with the same content in book form. Certainly for the purpose of reading it themselves, the book is more accessible than a full repeating of the TV script.

The mystery itself is simplified a bit and actually makes more sense in the book. In the episode the pirates can be seen hiding on the ship then heading for the caves as Noddy and Deltoid are looking for them (they’re barely seconds ahead of them). In the book it’s implied they’ve been hiding in the caves practicing all along. Also, in the book Noddy only properly discovers the reason for the pirates hiding when they tell him. In the episode he works out that they’re hiding from Scurvy before he finds them.

Some of the bits that are cut are a shame, for example the drive to the pirates ship and the one to the caves, partially as it adds more understanding to the sheer irritatingness of Scurvy but also because the scenery is so good. Though, perhaps, in book form the scenery would be hard to appreciate in full.

This entry was posted in Blyton on TV, Book reviews and tagged Noddy, Noddy Toyland Detective, The Case of the Hiding Pirates. Bookmark the permalink.