As it is April Fool’s day today, I had thought about opening this post with a false story about a brand-new and never- before discovered Enid Blyton book. But I wasn’t sure that I could carry it off convincingly.

Andy made the girls lie down together, and then he piled sand high over them, leaving a space over their noses for breathing. Then he dragged handfuls of seaweed from the rocks and threw it over the sandy mound. When he had finished, the girls looked exactly like the seaweed-covered rocks nearby! It was really marvellous. 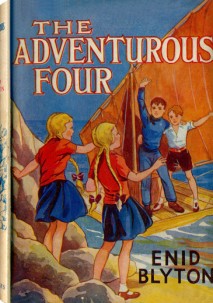 Mr Twiddle is one of the most foolish fools in any of Blyton’s books. In Hello, Mr Twiddle, the foolish man ‘loses’ his hat by hanging it on the horns of the cow he is leading, mistakes a snowman for a burglar, and loses his mackintosh by putting his coat on over the top of it. What’s worse is, he can never work out why things have gone so wrong for him! His poor wife is always in despair.