Enid Blyton in The Child and the Book

SORRY NOT TO SEE YOU THESE HOLS. HAVE GOT A MYSTERY TO SOLVE IN TIPPYLOOLOO, AND AM LEAVING BY AEROPLANE TO-DAY. ALL THE BEST! FATTY

Fatty sends the other Find-Outers a false telegram as a joke a the beginning of The Mystery of the Spiteful Letters.

Tinker Hayling is, at first glance, rather an irritating child. He is only a year or two younger than Anne Kirrin, yet he is obsessed with cars, and specifically with pretending to be a car. He is often to be found running around making engine noises, gearbox noises, squeal of tires noises, and requesting biscuits or cakes in lieu of petrol. His redeeming qualities are that he owns a pet monkey, and also a lighthouse. Tinker appears in two Famous Five books, firstly Five Go to Demon’s Rocks where they stay in his lighthouse and then in the final book of the series, Five Are Together Again. 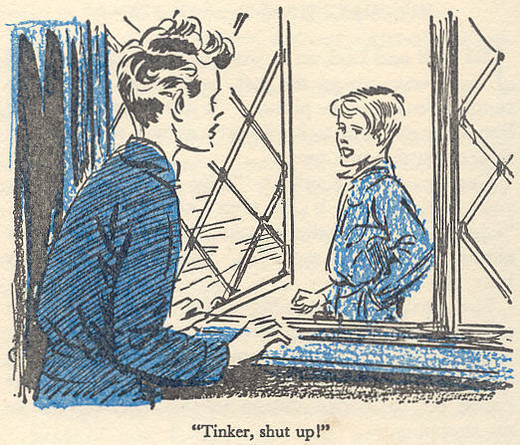 This entry was posted in Blog talk and tagged April, Five Are Together Again, Five Go to Demon's Rocks, Monday, The Mystery of the Spiteful Letters, Tinker Hayling. Bookmark the permalink.