Five Go Off to Camp

This is the seventh book in the series, a series which was only meant to run for six books! Children loved the Famous Five so much, however, that Blyton wrote another six. And another six. And then a final three. 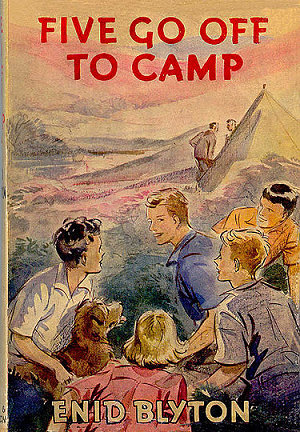 My sister and I had this book on cassette tape and used to listen to it all the time so I find bits of the book playing in my head as I read it. Not everything as the cassette was highly abridged but many of the lines of dialogue stand out in my memory – Blow, I’ve sprained my ankle! – But you will let me come next time, won’t you, Julian? – That’s let the cat properly out of the bag – Aye, I’m a ninny – Cecil Dearlove! and loads more!

A story in three parts

Usually I split the stories into three bits – the start where nothing adventurous happens, but they arrive somewhere and settle in, the adventurous middle and an exciting conclusion.

This one I’ve split a bit differently:

Usually the first discovering of a mystery/adventure would start part two, but I feel it fits more into part one here. Once they meet Jock the dynamics of the group change a bit and the real adventures begin, starting from Mr Andrew’s OTT warnings to stay away from the spook trains.

All about Mr Luffy

Mr Luffy is one of Julian and Dick’s school teachers, and is also a friend of their parents/ Due to all their previous adventures their parents aren’t keen to let them go off on their own again, so they arrange for Mr Luffy to go with them to supervise.

Only Mr Luffy is more likely to need supervision! He is a bug enthusiast and is happy to disappear for hours on end, forgetting about meals and everything else, including friends he was out with.

Two chaps I know once went out in his car with him for a day’s run, and he came back without them in the evening. He’d forgotten he had them with him, and had left them wandering somewhere miles and miles away,” – Julian

On form, he arrives late to pick them up, and then drives too fast as he forgets he is pulling a trailer. The last time he took it he lost half the contents through bad driving! Later he almost drives off with the empty trailer still attached as he forgot about it – and says he’s always taking it without meaning to. 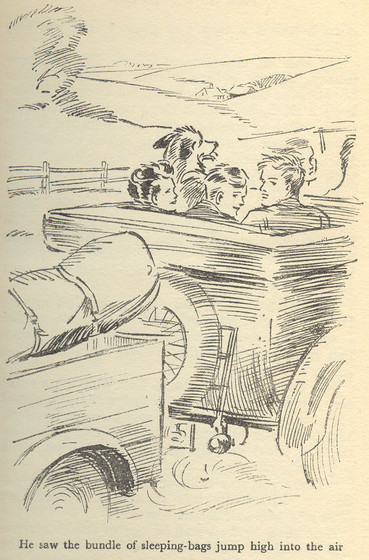 He’s almost like a very genial version of Uncle Quentin – though he seems to pay a bit more attention to the importance of regular meals.

Blyton describes him as an odd-looking fellow. He had very untidy shaggy eyebrows over kind and gentle brown eyes. He had a rather large nose with looked fiercer than it was because, unexpectedly, it had quite a forest of hairs growing out of the nostrils. He had an untidy moustache, and a round chin with a surprising dimple in the middle of it. His ears… were large and turned rather forward, and [he] could waggle the right one if he wanted to. To his great sorrow he had never been able to waggle the left one. His hair was thick and untidy, and his clothes always looked loose, comfortable and too big for him.

I just love the extra detail about the ear waggling, and especially his sorrow about not being able to waggle the other one. I almost know how he feels as I can raise one side of my upper lip in a marvellous sneer, but not the other!

Initially, when we’re told that the Five are going to have to put up with a supervising adult for their holiday you imagine that they’re not going to be very happy about it. As a reader we also are not that happy, unless we think they can be quickly disposed of with an emergency at home or something. But as soon as we hear about Mr Luffy I think we relax, and understand why the children are quite happy to go off with him. They like him, and also know that he’s not going to be bossy or cramp their style. It turns out he’s great fun anyway. He had wanted to camp near the children but was tactful enough to camp further away when he realised they would prefer that. He lets them do their own thing, but joins them for the odd card game and he’s also a great swimmer, even faster than Julian.

Still, imagine going to boarding school all year then going on holiday with your teacher as well! Not sure what modern safeguarding would make of it.

I love Soper’s artwork as always but she just doesn’t draw Mr Luffy like I imagine him. I picture him as having much bushier hair and stronger features. I think I also imagine him as quite a bit older than Blyton and Soper do. He looks around 40, maybe, but in my head he’s more like 60.

Mr Luffy comes through for the Five a couple of times in the book, proving they were right to go away with him. First he stands up to Mr Andrews and allows Jock to stay with them at camp, and then he reports the missing children to the police and escorts Anne on a rescue mission.

Jock is an important sidekick in this book. Often the Five adventure perfectly well all by themselves, but it’s also nice when someone else is included (especially when he doesn’t make idiotic car noises all the time…).

Jock Robbins lives at Olly’s Farm with his mother and step-father. Mrs Andrews explains they have different names, rather apropos of nothing, as Jock was her first husband’s son. Maybe she thought they looked the judgemental type.

Olly’s farm is a smallish place where you would expect them to be scratching a living by working all hours. Surprisingly, though, it’s full of shiny new mod-cons, equipment, machinery, lorries. It doesn’t quite add up. Mr Andrews is no farmer, he hires men who are rubbish farm-hands.

It doesn’t add up from the perspective of a reader who knows what’s going on. Spoilers to follow!

So Mr Andrews is running a side operation in black-marketeering. I say side operation, it probably accounts for 95% of the income. So why pour so much money into an unprofitable farm? Anyone with half a brain could tell that farm couldn’t produce enough profit to sustain that sort of spending. I suspect a lot of it is just to please Mrs Andrews who seems like a lovely woman. I do wonder though how much she suspected and whether she was burying her head in the sand. She knows how to run a farm, surely she could tell the figures didn’t add up?

Also, I know he needed labourers for moving the stolen goods but why for goodness sake does he hire them as farm hands then let them skulk around doing very little? It’s all very stupid if you’re trying to pretend nothing out of the ordinary is going on. But then again maybe he’s just very stupid. His massive over-reaction to hearing the children talking about spook trains proves that. He rambles about Bad things. Accidents. – possibly the Comic Strips inspiration for the Robbie Coltrane speeches. He even insists that the spook trains are real – a sure fire way to make sure the boys go to investigate. His attempts to keep Jock from the children also seems heavy-handed and I’m surprised the children don’t see through that earlier and suspect him of being involved.

Anyway, the end is a bit strange too. Mr Andrews is arrested and Mrs Andrews is a bit upset but also very pragmatic about it. She blames his friend for persuading him into his criminal activities, saying her husband is very weak. He’s also a liar and a bully not to mention a member of a criminal gang. He doesn’t merely do a bit of black marketeering, he then kidnaps three children, hits one of them, ties them up… Not a nice man at all. Mr Luffy seems to think being arrested and perhaps jailed or fined for his crime will set him on the straight and narrow but I’m not so sure. Being the 1950s step fathers (and some fathers) were probably not expected to be particularly close with their children but he shows such little interest or regard for Jock that I think they’d be far better off without him.

I will stop there for the time being, next time I will go over the exciting spook train and tunnel events at the end of the book, and do all my questions, comments and nitpicks as well.

This entry was posted in Book reviews and tagged Five Go Off to Camp, Jock, Mr Luffy, Spook Trains, The Famous Five. Bookmark the permalink.