I’ve thought before about the possibility of Malory Towers being adapted for screen, small or big! It’s something that appears in our search terms now and again, and I’ve written about various adaptations that could be made, which included Malory Towers.

And now it seems that it’s actually going to happen!

Well, I can’t guarantee anything. A Faraway Tree movie has been in the works for about the past five years, apparently, but with no sign of anything actually happening. This could, obviously, go the same way, but I’m hoping it doesn’t!

Me falling out of my chair in shock at the news.

So what do we know?

So far, not an awful lot.

Perhaps most importantly, it is going to be set in the 1940s! 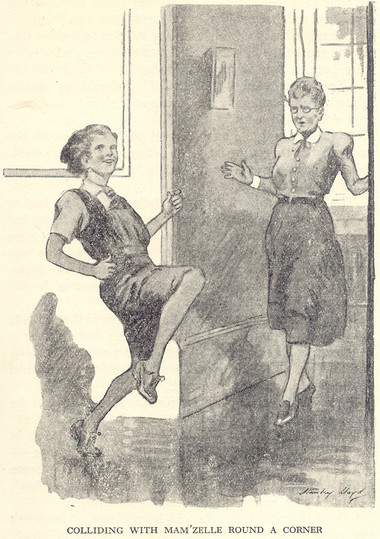 What do I think?

I think that is absolutely the right decision to set the show in the 1940s. While I think the 70s Famous Five series doesn’t suffer too much from being modernised, a Malory Towers full of mobile phones, selfies and the Kardashians would just be horrific.

Interestingly, there is supposedly going to be a “contemporary twist”. I cannot think what that’s going to be, but I hope it doesn’t detract from the period setting.

The focus is said to be on bullying, peer pressure, self-doubt and shifting cliques. That sounds like Malory Towers, all right. Though crushes are also mentioned, which isn’t something that crops up at Malory Towers. It will be interesting to see how they handle these sorts of storylines for children with modern sensibilities. The Malory Towers girls sort out an awful lot of their issues themselves, doling out their own sorts of punishments. Sending girls to Coventry wouldn’t be a popular move nowadays – even I think it’s a pretty awful way of dealing with someone to have their whole class blank them.

The head of content for CBBC, Cheryl Taylor, has said:

Malory Towers set the template for popular British boarding school stories and we’re delighted to bring this classic title to CBBC. Darrell Rivers is a truly iconic character – sparky, independent and a fierce warrior against injustice. She shone a bright light on the potential of all girls at a time when expectations were very limited. The books have inspired generations of young readers and we can’t wait for our audience to meet Darrell and her friends.

Statements like that always give me a lot of hope, but I’ve been let down many times before by self-professed Blyton fans who claim to have brought us something new which is also respectful to the original.

I’m slightly concerned about only thirteen episodes. That’s only two (and a bit) per book – unless it’s going to cover the Pamela Cox books too. Then it’s only one, probably half hour, per book! So much is going to get cut!

Then there’s the question of the cast! I’m sure it will (quite rightly) be more multicultural than Malory Towers was. It would be nice to see a famous face or two, as well.

We will have to wait and see if this adaptation delivers!

What do I want to see?

I definitely want to see things that have been cut from the latest paperbacks – like Darrell slapping Gwen. I’d also love to see them playing lacrosse. My favourite characters after Darrell are Belinda and Irene so I hope they appear with all their forgetful ways (and Belinda’s scowl notebook) but I imagine they might amalgamate them into one forgetful character. I suspect they may only have one Mam’zelle, too.

Story-line wise Mary-Lou rescuing Daphne from the cliffs is an absolute must as it’s probably the most thrilling bit of the book. That and June’s rescue of Amanda from the sea.

I’m sure they will include some tricks on the mistresses, but which ones? The hair-pin stealing magnet? The pinging bubbles? The sneezing powder? I’d like to see the pink chalk OY, myself.

P.S. thank you to Rebecca Lewis who brought this to my attention by sending me a link to her article.

This entry was posted in Blyton on TV and tagged Malory Towers. Bookmark the permalink.

3 Responses to Malory Towers on TV