When people search for Enid Blyton, what are they looking for? (#1)

When people search for Blyton related media, what are they looking for?

A large proportion of our blog views* come from various search engines – and WordPress tells us exactly what the search terms were. It’s really interesting to see what people are looking for in terms of Blytonian material (and sometimes downright funny).

The top 5 topics searched for (roughly in order) the Famous Five, Malory Towers, the Five Find-Outers, Blyton’s poetry and illustrators.

The Famous Five’s search terms were mostly people looking for information on a particular book – either a summary or information about the various editions. The books that featured most often were Five on a Treasure Island, Five go to Smuggler’s Top, and Five Run Away Together. There were also lots of searches about the various TV series – and searches for each of the actors in them. The most popular actors were Laura Petela and Jennifer Thanisch who played Anne in the 90s series and the 70s series respectively. Plenty of people also searched for characters of the Famous Five, Julian got the most searches while Anne, George and Dick were roughly tied. There were also quite a few searches for Edgar Stick (generally questioning the Five’s treatment of him.)

People searched for individual books mostly, again, wanting plot summaries or information about editions. They also searched a lot for details about Malory Tower’s crest or badge and its uniform. Unsurprisingly Darrell Rivers got the most searches of any character, followed by Sally Hope and the Mamzelles.

Again, searches for books were most common – The Mystery of Tally-Ho Cottage had the most. The most common character searches were for Fatty – though someone did want to know about movie versions of some of the books, and someone else asked if there were any photographs of the characters.

There were lots of searches just looking for poems or poetry by Blyton, and some which specifically named the poem they were looking for – Little New Year and Dead Leaves most often.

Lots of people searched generally for illustrations from various books, or for a particular illustrator. Eileen Soper appeared in the most searches, though there were several for Betty Maxey and Stuart Tresillian.

Perhaps surprisingly we had very few searches for Noddy, and none for the Secret Series.

THE NOT QUITE RIGHT

We had a whole catalogue of people who clearly found themselves on our blog when they were in fact searching for something completely different.

For example we had people were looking for Sylvia Naughty, whoever she might be, Belinda Morris Athletics, World end tomorrow weather, Five find father, George Soper, Famous Five Santa, Sindy 1990s, Imogen Summerfield Blyton and Who is Top Smugglers.

You can see how these people came to the blog, though, as we’ve used most of those names/words – just not in that order! Except for Sindy… no idea why they ended up here.

I love Sindy but she’s not appeared on our blog before.

We also had a lot of very confused people, searching for Blyton-related material, who got their search terms rather muddled.

A few of my favourites would be Rene Cloke Wishing Tree, Summary of Kirrin Island by Eileen Soper, Mary Pollock The Treasure Hunters and The Six Find Outers.

How a 90s edition of “Kirrin Island” by Eileen Soper might look.

We also had some that are just impossible to suggest an explanation for.

Mannering Enid book people, eh?
Novel the Ship of Adventure Guid Blyton is character… I almost see where that one’s going, but it’s just so wrong.
And main event and incident and episode her ankle… just what were these people looking for, and how did they expect to find it with those terms?
What is the odor is Amelia Jane books… just weird.

There were definitely defined themes that became obvious when I read through the search terms.

A lot of people wanted plot summaries and character sketches for all the main series mentioned above – many book related searches contain the words summary, theme, message, values and synopsis. Also popular in book searches were edition, dustjacket, published and illustrator. There were multiple searches looking for ideas for costumes based on Blyton characters (the Secret Seven and Amelia Jane were popular choices) and ideas for Blyton-themed birthday cakes. We also had a lot of searches for audio books.

We also had a few searches about racism within Enid’s books. The most disturbing part was these searches were specifically asking about books where I can see no racism at all. Five on Finniston Farm was one, and Mr Pink-Whistle another.

A final, amusing theme, is the number of people looking for photographs of characters or information about movies/television series that don’t exist. I’ve mentioned the Five (or Six!) Find-Outers, and those were of The Mystery of the Strange Bundle (or more specifically Fatty in that movie), and The Mystery of the Missing Necklace, but we also has people asking about the actress who plays Mamzelle Dupont from Malory Towers and a Malory Towers movie. 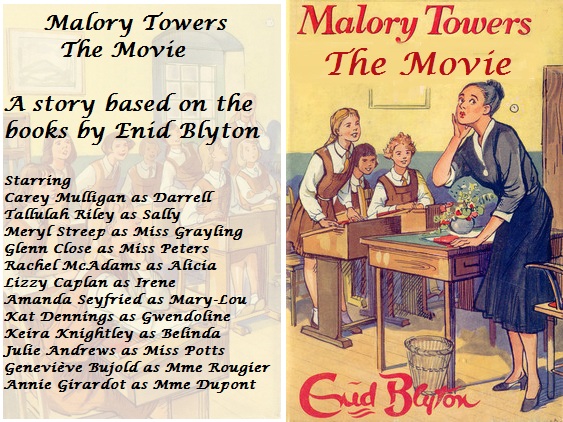 Just to swell the heads of some of our contributors we had a bunch of people search directly for their work. The ones I noticed were Julie, Aaron and Poppy.

Oh, and several people actually searched for our blog directly, and actually found us!

*nearly two thirds of people who click a link to come to our blog do so through a search engine.

7 Responses to When people search for Enid Blyton, what are they looking for? (#1)