On my bookshelf part 4

Fancy – you never would clean Daddy’s bicycle for him when he asked you to. I suppose it’s because you’ll get a shilling from Mr. Fraser – and Mummy said you ought to do it for Daddy’s love.

Linda is rather cutting to her older brother Roddy in Four in a Family. 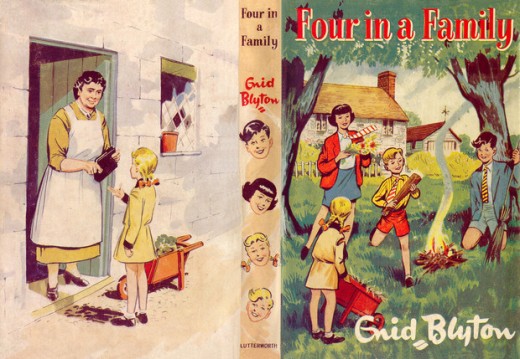 Five on a Secret Trail is the Famous Five’s fifteenth adventure. Because Timmy has hurt himself and people keep laughing at his special protective collar, George takes him camping on Kirrin Common where Anne joins her later. Forced to take shelter in a half-ruined cottage because of terrible weather, they experience a frightening night of lights, noises and a face at the window. Thankfully the boys arrive soon after and together they start to look into what’s going on, aided, or perhaps hindered by twins Guy and Harry who aren’t talking or even acknowledging each other at the time.

This entry was posted in Blog talk and tagged August, Five on a Secret Trail, Four in a Family, Monday. Bookmark the permalink.