This is the third magazine in a row that doesn’t have a letters page. Enid says in her newsletter I’m so sorry – but again there is no letters page for your letters this week. As you will see, there is a letter-page – but it is given up to the Best Letter we have ever had there. Aren’t you pleased?

She also writes in her opening letter  I am sorry we have no letter-page for you this time, but I am sure that all of us are gas to see it used for such a lovely letter – and to make up for missing it three times running I will award prizes to every letter I choose for the letter-page then, not just the top one.

That doesn’t mean I want special letter-page letters. I don’t. I always choose the winning letters from your ordinary, every-day letters, which are written with no thought of being printed, and certainly no thought of a prize. The ordinary, every-day letters that we get from you are better than any made-up ones written merely in order to win  a prize!

Today this page is honoured by a message from Her Gracious Majesty, Queen Elizabeth the Second.

It is with much delight that I print it here, so that not only those thousands of my readers who went in such beautifully illustrated Christmas messages to Her Majesty may read it, but also so that each of us may rejoice in the honour paid to the prize-winners. Every reader shares in this, and we are so grateful to the children whose messages evoked such a gracious reply from our beloved queen.

I have received The Queen’s commands to express her Majesty’s sincere thanks to you for the beautifully bound volume containing twelve messages of Christmas greetings to The Queen from children throughout Great Britain. Her Majesty is delighted to have this collection of kind and loyal messages representative of so much affection on the part of great numbers of children. Please convey to those who contributed to it an expression of her sincere gratitude. 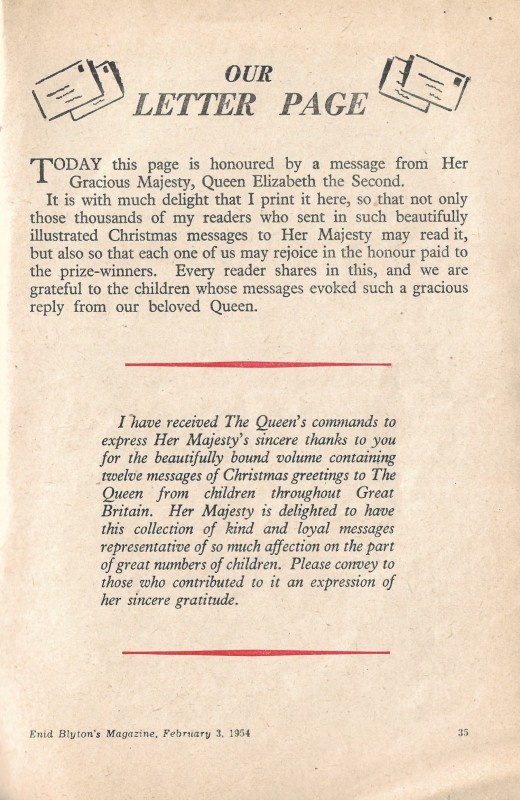 I know that The Queen almost never writes her own thank you letters, that would be a full-time job in its own right, but the way Enid goes on here you’d think Elizabeth had personally written a long a gushing letter!