Decorating for Christmas – the Blyton Way

Christmas today is probably quite different from Christmas back in Blyton’s time. There weren’t any plastic trees for a start (though ones made of feathers or brush bristles had been around a while) and while it’s easy to imagine it all as idyllic and cosy there was at least a certain level of consumerism and tat. Saying that, the majority of the Christmases that feature in Blyton’s works are very wholesome and that’s what I’ve tried to capture in this post.

Making your own paper decorations

Bring a bit of 1950s festivities to your home by cutting out various shapes from paper or card and making all these lovely decorations. 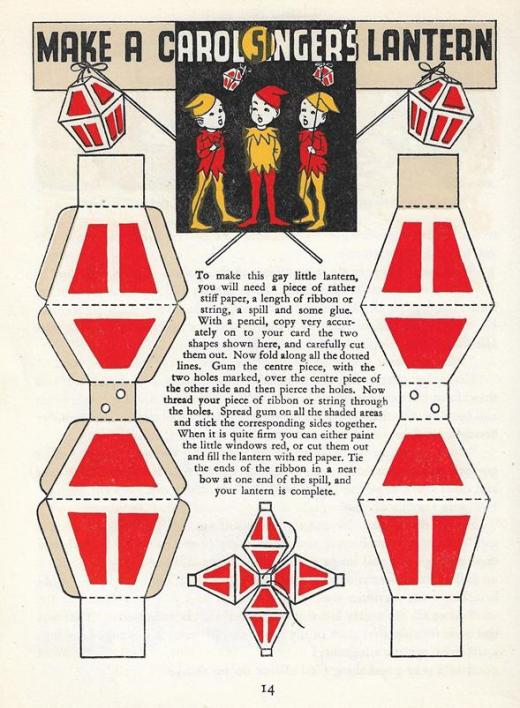 These are designed to be tied to a stick but you could easily string them across a ceiling instead. I think they would look great with red tissue paper over the windows, or even red cellophane saved from sweet wrappers. For the gum feel free to substitute a glue stick! 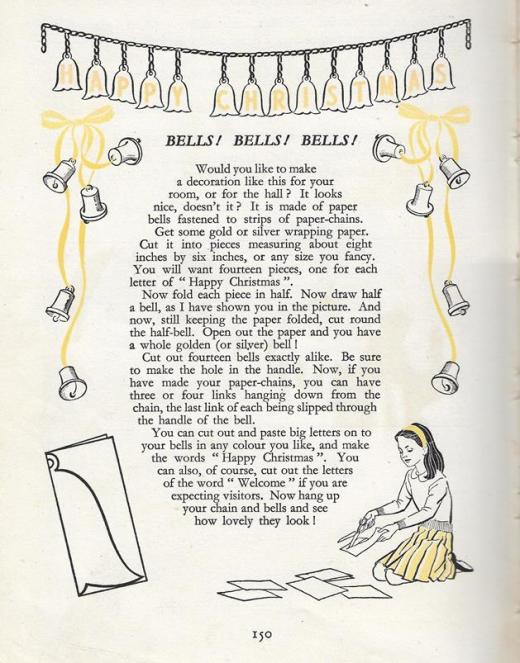 This one strikes me as challenging – to draw and cut out fourteen identical bells! I think I would have to make a template and trace the rest.

Paper chains can easily be made – there are plenty of shop-bought kits with precut strips and little bits of double sided tape to stick them together. When I was young we had kits of gummed paper that just needed to be licked at the end then stuck down. Or you could easily make your own by cutting up wrapping paper, newspaper or any other paper and gluing them into links.

Very fancy paper chains are shown in one of the magazines, though they wouldn’t be much use for hanging bells from. 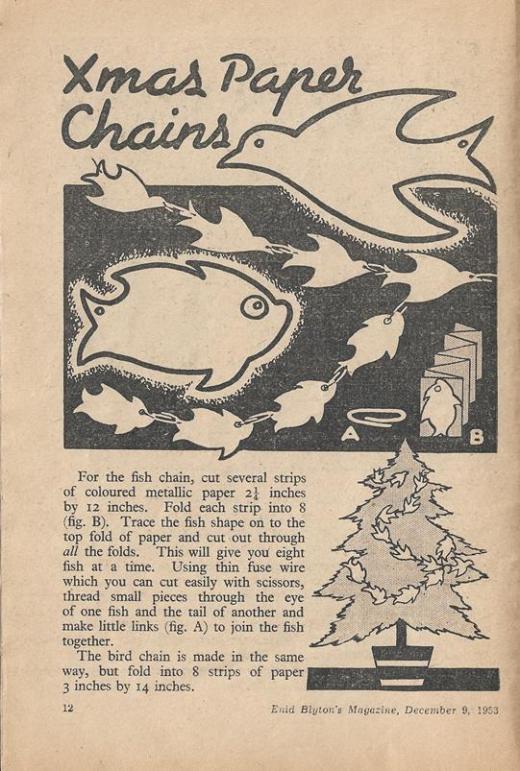 I’m not sure how festive fish or birds (excluding robins, of course) are! but these could look quite effective if done using metallic paper as suggested. 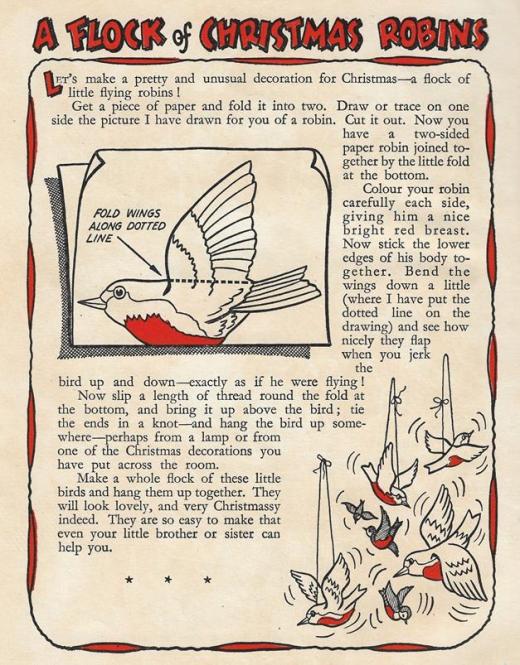 These paper robins are definitely Christmassy. If I had the time I would give them a go – maybe in a few years when Brodie is old enough to want Christmas crafting projects. 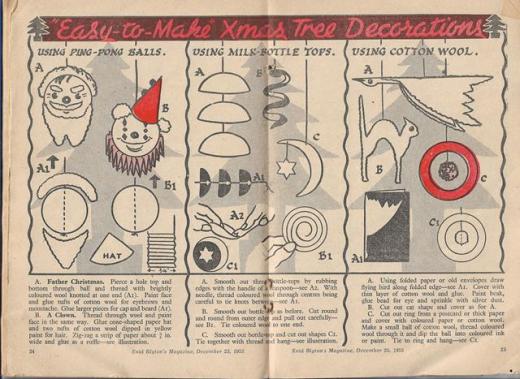 If you have my crafting skills easy probably isn’t the right word for these, but there are some interesting uses for milk bottle tops if anyone still has the same type! 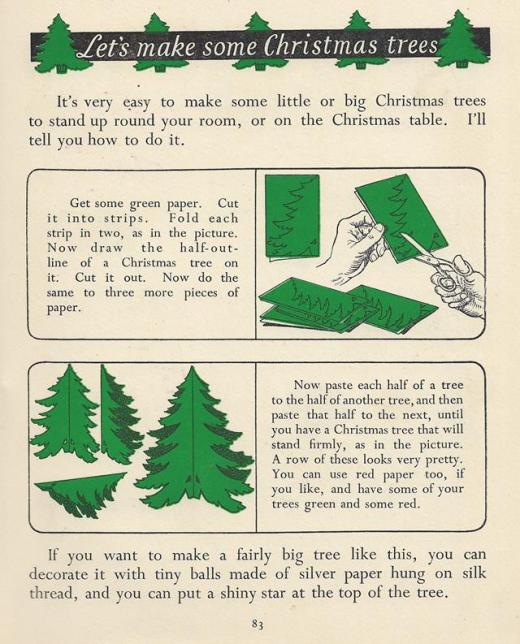 This looks like it would be really effective (but I’d have to use a template again, me freehanding would just make for really wonky trees!). If you used card instead of paper you could cut two trees and then cut slits in them, one from the top and one from the bottom then slide them together.

Something that has become more popular again recently is having a tree that is planted outdoors through the year and then brought in for Christmas before being replanted again. Now it’s being done for eco reasons, but it is mentioned in several of Blyton’s stories as a perfectly normal way of doing things.

Decorating the tree, however, has changed a lot!

Lots of Blyton’s Christmas stories involve trees decorated with toys and gifts which are then given to children attending a party, or the children who live in that home.

In Five Go Adventuring Again Anne hopes for the fairy doll from the top of the tree, whereas now I’m sure most people reuse the same fairy doll every Christmas. In The Christmas Tree Aeroplane Mrs Lee who holds the party gives each child a present (including a toy boat) from the tree. And in The Christmas-Tree Party the tree is hung with dolls, and engines and books and motor-cars. It seems strange to think of toy cars and boats and dolls ‘decorating’ a tree.

The other big difference is using candles as tree-lights! They were clipped on to the ends of branches and must have created a huge fire hazard. This is one ‘tip’ I don’t recommend!

In another make-your-own (but not out of paper) you can have little baskets of sweets on your tree. 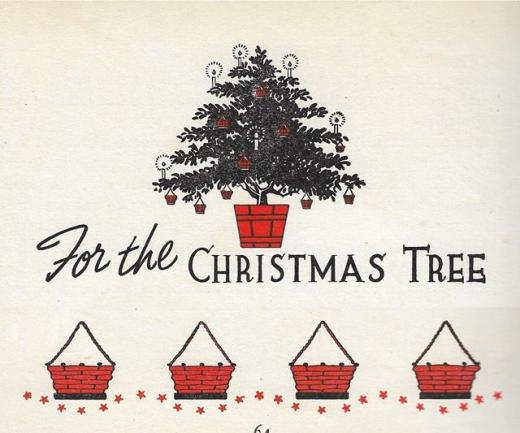 It would be fun to make some gay little baskets to hang on the Christmas tree, full of sweets.

We want some flat round corks, some long pins, and some bright coloured wool.

Perhaps Mother has a pickle-cork she can let us have, a nice flat one that we can cut into two, and use for the bases of two baskets. If you are not very old, ask Mother to cut the cork for you, or you may hurt yourself with the knife.

Now we have our flat cork. Stick the long pins in all round – not too close together. Now take a gay length of wool and begin to twist it from pin to pin. You must begin weaving at the base of the pins, of course, not at the top. Go on weaving until the pins are quite covered with the wool, and you have your little basket.

A piece of wire (or a hairpin) will do for a handle. Twist some wool over it, then bend the ends to catch under the edges of the basket, just as in the picture.

Now put your sweets in, and hang your little basket up on a twig of the Christmas tree. If you make half a dozen, they will look very gay hanging on the tree.

I suspect the corks mentioned are cork jar lids rather than the type of corks we use now for wine bottles.

A different kind of tree

There are a few mentions of an outdoor tree – but not the kind we see now with outdoor string lights.

Rather how about decorating a tree (or bush!) for the birds?

As suggested in The Little Christmas Tree

“Robin! I’ve got such a good idea!” [Susan] said. “Even if we don’t feel like using the tree for ourselves, we could use it for the birds. We could hang biscuits and crusts and nuts and bacon rind on it. The birds would love it.” 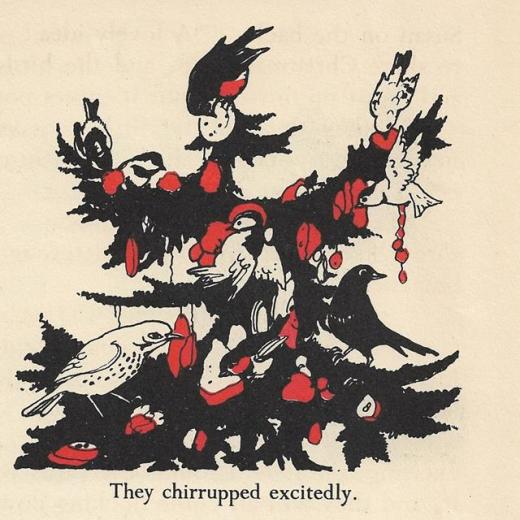 They took a coco-nut and broke it into bits. They made holes in the middle of the bits and threaded them with string. Then they tied the bits of coco-nut to the branches, just as if they were toys.

The the children brought out some bits of bacon-rind and they hung those on the tree too. They brought out a bone and tied that to one of the strongest branches! Then the children tied crusts of bread and biscuits on to the tree, and then three fine sprays of the millet-seeds that the birds love so much.

I imagine both trees would have to be refreshed and redecorated every few days as the birds ate away at the decorations!

In keeping with bringing a real rooted tree indoors, in several Blyton books and stories families bring in real holly and mistletoe to decorate with. Best to ask permission before you cut any down, though, unless it has grown in your own garden!

I wonder how many of these things Blyton decorated her house with at Christmas?

3 Responses to Decorating for Christmas – the Blyton Way